LAS VEGAS – Manny Pacquiao and Adrien Broner spent most of this week cracking jokes and smiling while promoting their fight.

Both boxers stood, stone-faced, as they stared at one another Friday afternoon at a weigh-in that drew a few thousand fans to MGM Grand Garden Arena. Pacquiao eventually cracked a smile before they parted ways.

Moments earlier, the 40-year-old Pacquiao stepped on the Nevada State Athletic Commission’s scale at 146 pounds for their Showtime Pay-Per-View main event Saturday night at MGM Grand Garden Arena. Broner, 29, weighed in at 146½ pounds, half a pound below the welterweight limit of 147. 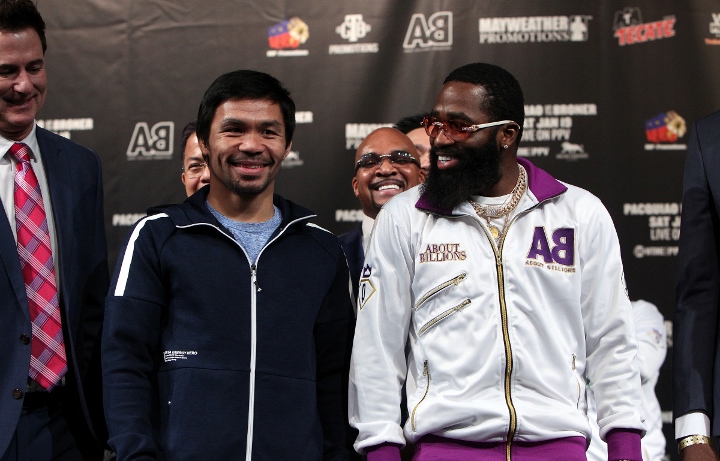 The Philippines’ Pacquiao (60-7-2, 39 KOs) is listed as approximately a 3-1 favorite over Cincinnati’s Broner (33-3-1, 24 KOs, 1 NC) at MGM Grand’s sports book. They’ll fight for the WBA world welterweight title Pacquiao won by knocking out Argentina’s Lucas Matthysse (39-5, 36 KOs, 1 NC) in the seventh round of his last fight, July 15 in Kuala Lumpur, Malaysia.

If Pacquiao wins, he could face Floyd Mayweather Jr. in a rematch of a maligned May 2015 bout Mayweather won by unanimous decision. Las Vegas’ Mayweather (50-0, 27 KOs), who’ll turn 42 on February 24, would have to end a third retirement to oppose Pacquiao again later this year.

Before Pacquiao and Broner made weight, Las Vegas’ Badou Jack (22-1-3, 13 KOs) weighed in at the light heavyweight limit of 175 pounds for his 12-round fight against Marcus Browne (22-0, 16 KOs). Staten Island’s Browne officially weighed 175 pounds, too.

The bout between Jack, 35, and Browne, 28, will be contested for the WBC silver light heavyweight title. It’ll be the third of four fights Showtime will air as part of its pay-per-view show.

Once they weighed in, Browne shoved Jack as Jack flexed while standing at the front of the stage. Jack shoved Browne back before they were separated by members of their camps.

Prior to Jack and Browne weighing in, Rau’shee Warren and Nordine Oubaali made weight for their 12-round, 118-pound championship match.

Warren and Oubaali will fight for the vacant WBC bantamweight championship. Oubaali beat Warren, a rare three-time Olympian, at the 2012 Summer Olympics in London.

The first fight of Showtime’s pay-per-view show was jeopardized once the weigh-in ended because Jhack Tepora came in way overweight for his featherweight title fight against Hugo Ruiz.

[QUOTE=_Rexy_;19443586]Why would he eat to make weight? There’s no minimum weight.[/QUOTE] That's true there"s no mimimum weight but maybe it's a better strategy to fight Broner at a little heavier weight than coming in at only, let's say 142 lbs.

[QUOTE=texasboi15;19442299][B][SIZE="3"]Agreed Adrien looked better than Pac Manny's muscle looks old I hate to say.[/SIZE][/B][/QUOTE] So hes got that old man strength. Nice. Couple it with his speed and all we are going to see all night is broner shaking his…