Oubaali: I Don't Feel Fans Saw Me At My Best Versus Inoue

If there was anything Nordine Oubaali took away from his latest win, it’s just how much more damage he can cause at full strength.

The unbeaten 33-year old from France registered the second defense of his bantamweight title following a 12-round win over Japan’s Takuma Inoue in their title consolidation clash in Saitama, Japan. The Nov. 7 title fight saw Oubaali—a two-time Olympian who claimed a 118-pound belt earlier this year—ride a 4th round knockdown all the way to the finish line in ending his 2019 campaign with his third win in as many tries.

“I’m very pleased to have beaten Takuma in his home (country),” Oubaali (17-0, 12KOs) said of the win, which served as chief support to Takuma’s brother, Naoya Inoue (19-0, 16KOs) outlasting Nonito Donaire (40-6, 26KOs) in their World Boxing Super Series bantamweight finals and title unification clash. “It’s always good to get a big win outside of your own country.” 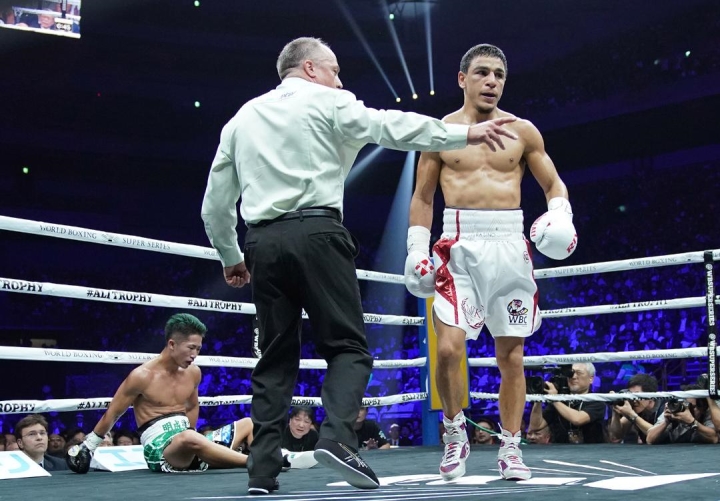 Hitting the road is hardly a new occurrence for Oubaali, having traveled the world throughout his decorated amateur career and fighting outside of his native France in all three ring appearances this year.

His title win took place in Las Vegas, Nevada, traveling to the United States to outlast former titlist Rau’Shee Warren, whom he bested in the 2012 London Olympics and once again in the pro ranks to become a bantamweight titlist. Wedged in between that win and his latest was a 6th round knockout of Philippines’ Arthur Villanueva this past July in Nur-Sultan, Kazakhstan.

Unlike his other two away games this year, the win over Inoue (13-1, 3KOs) nearly came at a cost.

“I don’t feel the fans saw me at my best versus Takuma Inoue,” confesses Oubaali. “I only arrived in Japan a few days before the fight. I didn’t give myself enough time to adjust to the time difference and the climate.”

Solid fighter who knows his way around the ring.

oubaali looked pretty darn good to me. he was really good against warrren, also. cant wait to see whats next for him—its nery, right? or the winner of nery-rodriguez?