Otto Wallin's Promoter: We Have A New Top Heavyweight

Wallin was still a winner in the eyes of his promoter and many others, though. The previously unproven heavyweight gave unbeaten lineal champion Tyson Fury such a tough time in their 12-round fight, Dmitriy Salita believes the Swedish southpaw established himself as one of the most formidable fighters in their division.

England’s Fury won a unanimous decision, but one of Wallin’s punches opened a nasty gash over Fury’s right eye in third round. Wallin turned it into a dogfight at times and fought through fatigue late in the bout to hurt Fury with a left hand early in the 12th round.

“What happened tonight is we have a new top heavyweight in the division,” Salita said during the post-fight press conference at T-Mobile Arena. “Otto did a great job, I think better than everyone gave him credit for. He showed that he has the skills to win. He showed he has a great chin. He showed heart, showed determination. He showed a great corner in [head trainer] Joey Gamache, that built a fantastic fight plan, from beginning to end, when Tyson was aggressive, when he wasn’t aggressive.

“I mean, Otto really was prepared mentally and physically to deal with everything Tyson had to offer. And even the stuff that Tyson did on the inside – I know it because I’ve seen them work together – this was really a tremendous game plan for both of them.” 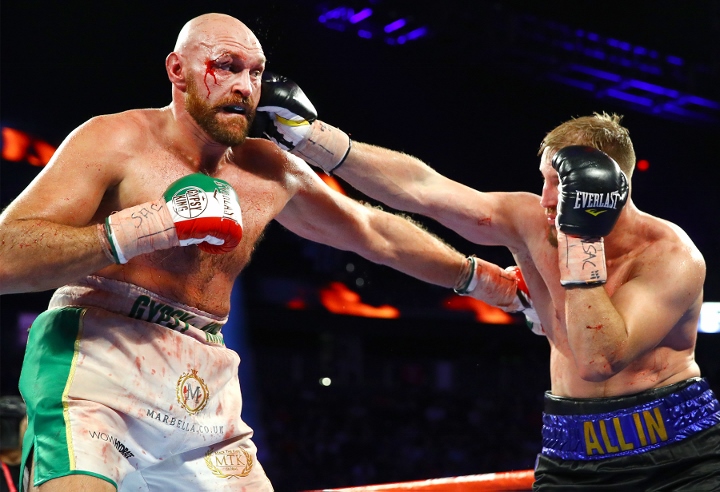 The 6-feet-5, 236-pound Wallin was nothing like Schwarz, other than that he, too, was unbeaten and unknown entering his fight with Fury. All three judges scored at least eight rounds for Fury (118-110, 117-111, 116-112), but the brash Brit was quick to praise Wallin for his exceptional effort in his first fight on a big stage.

“Otto’s never really fought on this level,” Salita said, “never really been in the spotlight of this magnitude. … But Otto did an amazing job, and he should be recognized as one of the top heavyweights in the world.”

I missed the part where it was claimed he was the next Larry Holmes... It's his PROMOTOR of course he's going to lay it on a little thick. The kid was pretty much unknown to most and I think it's…

Wallen Vs Joe Joyce for the vacant EBU title works well for me.

It's like when people were sucking JCC jr's c0ck for having a ''good'' 12th rd vs Sergio....Forgetting he got completely spanked the other 11 rds :lol1: Otto had a moment or 2.

All Wallin needs is a higher punch out put. Then again it's tough to judge that too against Fury.

Actually Wallin showed alot of skill balance and positioning which is tough to do against Fury. Showed a good chin and punch selection. I gotta agree, wallin beats many others I've been seeing. I'd say he beats both in that…