O’Sullivan boldly predicted he’ll have an even easier time defeating David Lemieux in their 12-round middleweight match on the Canelo Alvarez-Gennady Golovkin undercard Saturday night at T-Mobile Arena in Las Vegas.

“He’s there to be hit and I hit hard,” O’Sullivan said on a conference call recently. “I think I’m gonna be able to land on him with a little more frequency than I was on Douglas, because Douglas was a better boxer. He moved around quite a bit, he had good footwork and speed, longer arms and stuff. So it was tougher task to land against Douglas than it will be against Lemieux.” 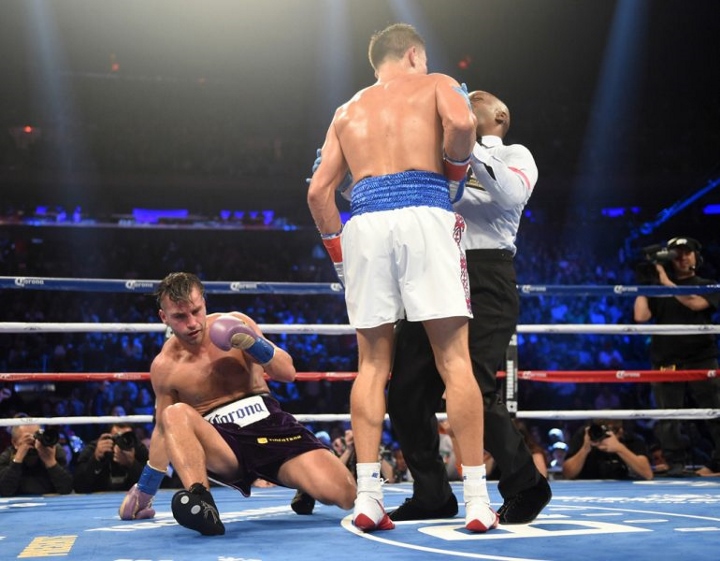 Lemieux (39-4, 33 KOs) will attempt to re-establish himself as a contender nine months after unbeaten WBO middleweight champ Billy Joe Saunders expertly out-boxed him in their 12-round fight the same night O’Sullivan knocked out Douglas (22-2-1, 16 KOs) in the seventh round December 16 in Laval, Quebec, Canada.

Montreal’s Lemieux, a former IBF middleweight champ, is the more accomplished fighter. O’Sullivan still thinks the 29-year-old slugger’s best days are behind him.

“I believe, obviously, the momentum is with me,” O’Sullivan said. “I’m the fresher fighter. I believe David’s time has come and gone. You know, he’s had his time in the past. He’s had some heavy losses. He’s got a number of hella beatings. So I feel the ball is certainly in my court.”

Lemieux has lost by technical knockout to Golovkin (38-0-1, 34 KOs) and Marco Antonio Rubio.

“It’s nothing personal against Mr. Lemieux, but I think it’s gonna be a good night for me,” O’Sullivan said. “I’m not really concerned about Lemieux. I’m looking at the bigger picture. I’m looking at Golovkin-Canelo. I’ll be ringside to watch their fight after I beat Lemieux, and you know, I can’t wait to [fight] one of those guys.”

Lemieux-O’Sullivan will be one of three bouts HBO airs as part of its pay-per-view undercard prior to the start of the Alvarez-Golovkin rematch. The telecast is set to start at 8 p.m. ET/5 p.m. PT and costs $84.99 to view in HD.

Sullivan looks like some bare-knuckle prizefighter from old ages.

Everything Gary O'Sullivan said about David Lamoo could be said about Spike himself. He's boring and one-dimensional, comes across dopey with little wit. When Chris Eubank Jr. was making him look like a plonker he just sat there grinning with…

Will Mr Mustache be Canelos next fight after GGG. to be honest I'm actually suprised Canelo took GGG again before Spike cause i thought he would of used Spike as a warm up. Props to Canelo for taking the big…

Spike is a meme, it's a good thing he can punch otherwise he wouldn't have gotten anywhere with his bar-brawler style. If he beats Lemieux it's probably due to a lucky punch. If he fights with no defense like he…

[QUOTE=petero;19090381]20 dollars on a real big screen movie Theater w sound system. I highly recommend this. Saw the last 2 Floyd fights at theater, great experience, picture is crystal clear.[/QUOTE] 100% this for those who've not watched a film in…