Oscar Valdez didn’t want to talk about his future ahead of his most recently scheduled start for several reasons—chief among them, to not disrespect his opponent as well as the uncertainty over at what weight his next fight would even take place.

The unbeaten featherweight titlist turned away the challenge of previously undefeated Jason Sanchez in his latest title defense last Saturday, which aired live on ESPN from Reno, Nev. While the win was clear-cut, Valdez struggled particularly in the second half to maintain his activity rate, attributed in part to his difficulty squeezing into a 126-pound uniform.

“I hope (to fight at featherweight again),” Valdez (26-0, 20KOs) admitted after his sixth successful title defense. “I also have to listen to my body. We’re going to see what’s best. Sometimes I get tired in there, and I’m not sure if it’s because of the weight loss. 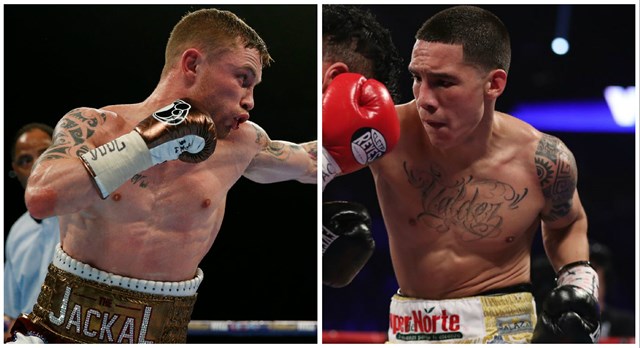 It will take a big fight to keep Mexico’s two-time Olympian at featherweight for at least one more fight. One is already being planned for later this year, provided that Carl Frampton—a former two-division titlist—survives his forthcoming Top Rank debut later this summer.

“We’re going to look for a fight later on in the year between Valdez and Carl Frampton, if Frampton is successful in his next fight,” insists Hall of Fame promoter Bob Arum, who promotes both boxers.

Still, the wildly popular boxer—at least in his corner of the world—brings notoriety and a hefty payday to the table. As enticing as would be a unification bout, becoming a little more famous along the way certainly couldn’t hurt Valdez’s bargaining power.

“I would definitely want a fight with Carl Frampton,” Valdez told BoxingScene.com. “Honestly, all the big names (at 126 and 130), but his name has come up. We’re both with Top Rank so it should be easy to make. It’s nothing personal with him, I just want to fight the best.

“He was the Fighter of the Year just a couple of years ago and is still a dangerous opponent. Every champion wants the big unification bouts, but until those come along sure I’d love to fight Carl Frampton later this year.”

Course he want's to fight Frampton; he's still a big name with a big following even though he's looked like damaged goods since his rematch with Santa Cruz. In theory it's big money for an easier fight, similar to why…

Why is he not mentioning Warrington. Why talk about the guy Warrington beat? Unify!