WBO featherweight champion Oscar Valdez (24-0, 19 KOs) is ready to return to the ring by the end of the year, after fighting a bloody battle with British contender Scott Quigg back in March.

In the biggest win of his career, Valdez fought through fire to win a twelve round unanimous decision in their Los Angeles battle, suffered a broken jaw during the fight.

According to Valdez, he's now recovered from the injury and intends to return in the near future. 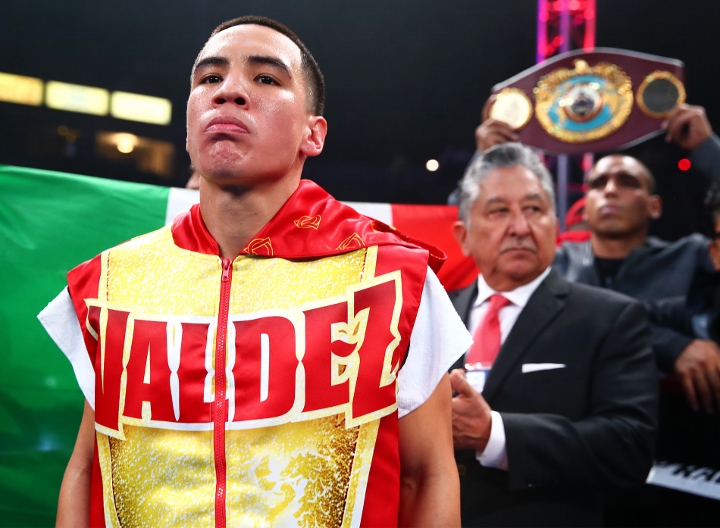 Valdez is targeting a return in the month of December.

One of his targets is WBO mandatory challenger Carl Frampton, but that contest may not be available since Frampton is scheduled to fight on August 18th against Luke Jackson.

And the other opponent on his list is WBA featherweight champion Leo Santa Cruz, who recently won a twelve round decision over Abner Mares in their rematch.

"I feel very good thank God. I'm very happy because now we can talk. I went through two months with my mouth closed, and now I can take advantage of that.[I'm already] recovered [from the jaw injury], and waiting for the doctor to tell us we're good to go. So we're waiting to hear back from him and we hope that we'll be good to go for December," Valdez told Caro Sports.

"Right now Carl Frampton is the mandatory fight for the WBO , but I understand that he has a fight. If not him, then I'll have another fight. But there is the fight with Frampton and there is another fight that I've asked for, with Leo Santa Cruz, who won in his last fight over Abner Mares. I would like to unify the title of the WBO with the WBA - and then try to get all the titles, that is my goal."

[QUOTE=ELHITMAN606;18882655]Leo has already faced superior fighters in Frampton and Mares and may face a superior fighter in Gary Russell[/QUOTE] I want to see them go :;$ican style and I think Valdez could win! He’s calling him out and it’ll pay…

Frampton is the more realistic fight for Valdez. Santa Cruz should fight Russell.

Ok fight, LSC wins decision..good test for the jaw since Leo not a puncher..

Valdez is a worthy challenger to Leo's titles. Does anybody know when his Top Rank contract is up?