NEW YORK – One night short of the one-year anniversary of the most meaningful fight of his career, Luis Ortiz is scheduled to return to Barclays Center on Saturday night.

The powerful Cuban contender will meet Germany’s Christian Hammer in a 10-round encounter that isn’t expected to amount to much more than a predictably easy knockout victory for Ortiz (30-1, 26 KOs, 2 NC). Facing Hammer (24-5, 14 KOs) in this Showtime co-feature is not nearly the fight Ortiz really wants, a rematch with Deontay Wilder.

If he just can continue “doing his job,” though, the 39-year-old Ortiz is confident Wilder will eventually grant him a second shot at Wilder’s WBC heavyweight title.

“Really, he doesn’t have anyone else to fight with,” Ortiz told BoxingScene.com before a press conference Thursday at Barclays Center. “Why not fight with me? He should give me a chance again.”

Whether Wilder should grant Ortiz another chance based on their compelling, competitive fight last year is one thing. Whether Wilder will do that is another matter altogether.

The likelihood of a Wilder-Ortiz rematch materializing still intensified last week, when Tyson Fury walked away from a contract for an immediate rematch with Wilder. Their contracts called for Wilder (40-0-1, 39 KOs) and Fury (27-0-1, 19 KOs) to go at it again May 18 at Barclays Center. 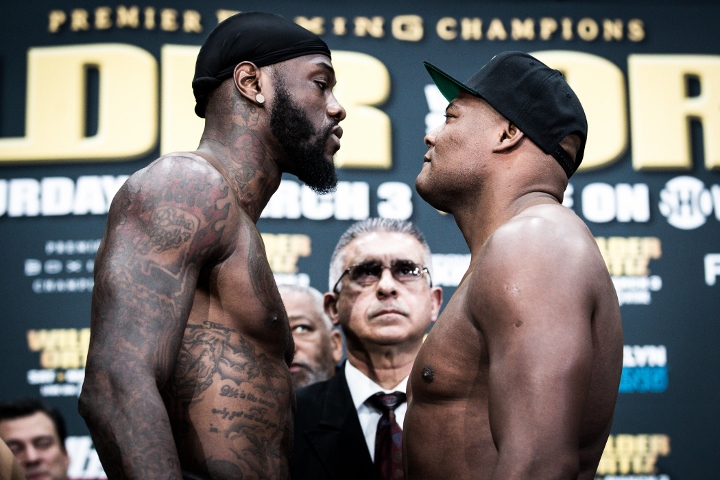 Fury’s next opponent hasn’t been determined. As BoxingScene.com first reported a week ago, Wilder likely will make a mandatory defense of his title against Dominic Breazeale on May 18 at Barclays Center.

Wilder hopes Fury is serious, assuming Fury wins his next fight, about revisiting a rematch of their debatable draw December 1 at Staples Center in Los Angeles. If not, multiple sources have informed BoxingScene.com that if Wilder were to beat Breazeale (20-1, 18 KOs), he would return to the ring sometime late in the fall, probably against popular Polish contender Adam Kownacki (19-0, 15 KOs).

A rematch with Ortiz obviously would be more attractive than a Kownacki fight – even if Ortiz’s detractors insist he is closer to 50 than 40. Regardless, Wilder and Ortiz produced an epic heavyweight fight last March 3 that warrants running it back.

Wilder floored the previously unbeaten Ortiz after landing a hard right hand in the fifth round, yet nearly succumbed to Ortiz’s power late in the seventh round. Ortiz hurt Wilder when there were about 40 seconds remaining in that round.

Wilder weathered those troublesome moments, came back and dropped Ortiz twice more in the 10th round. Referee David Fields stopped the action at 2:05 of the 10th round, once Ortiz went down again, the third and final time from Wilder’s vicious right uppercut.

Ortiz walked away from their fight with a healthy respect for Wilder both inside and outside the ring.

“I respect him, more than anything, for being a good father,” Ortiz said. “He has a sick daughter and I know he’s a good person, because I saw it and I heard some of his interviews about his daughter. I have great respect for him for that. I can tell Wilder’s a great father. All B.S. aside, the arguing and stuff, that’s just boxing. I have no animosity towards Wilder. I just want the rematch to prove to the world that I’m a better fighter.”

Wilder wants to grant Ortiz the opportunity he seeks. The Tuscaloosa, Alabama, native also understands the plan adviser Al Haymon and co-managers Jay Deas and Shelly Finkel have devised for him, specifically that an Ortiz rematch might come later rather than sooner, if at all.

“I would love to give Luis Ortiz the opportunity to fight again,” Wilder told BoxingScene.com on Thursday night. “Why not? I mean, the first fight was amazing. You saw two killers in the division. You had the boogeyman and you had the most dangerous of them all in there – one night, one fight. And it was a hell of a fight. It was an epic fight. And I think the next time we fight, I think we could do pay-per-view easy. So that it something that I’m definitely interested in, at some point in time.

The timing of their potential rematch might become bothersome to Ortiz and Jimenez if Wilder were to beat Breazeale and Kownacki and then seriously attempt to make the Joshua fight. There’s also the possibility, of course, that Wilder’s handlers ultimately might determine that opposing Ortiz again simply might represent too much more risk than reward with so much money at stake when they’re so close to making perhaps the biggest fight in boxing.

“I think he will give him a rematch,” Jimenez told BoxingScene.com on Thursday. “He gave it to him the first time. Wilder might have his issues and people might say he’s unorthodox, which he is. But one thing about Wilder, man, he’s got balls. He will step up to the plate when he has to. Everybody else mentions Luis’ name – Joshua, [Joe] Joyce, [Dillian] Whyte, and nobody fights him. Joshua mentions his name, but we know that’s not coming. We know Wilder will fight him.”