Ortiz: Wilder Is Only One Who Can Say For Sure If Rematch is Next

If his house was in better order, Luis Ortiz’s recent trip to New York would be to settle in for another heavyweight title shot.

Instead, his journey to Brooklyn’s Barclays Center was to tease the possibility of what might lie ahead for the Cuban southpaw.

The Miami-based heavyweight contender was on hand Saturday evening to bear witness to Deontay Wilder’s latest title defense, a crushing 1st round knockout of Dominic Breazeale. The feat marked the fourth stoppage win in as many Barcalys appearances for the unbeaten heavyweight titlist; the last such occasion coming last March versus Ortiz who insisted he was in town simply in support of his lone career conqueror. 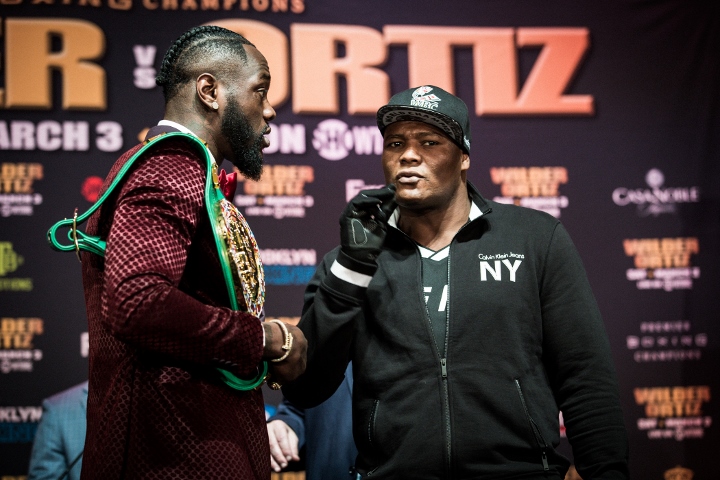 “I want to congratulate Deontay Wilder on a great performance,” Ortiz (31-1-0-2NC, 26KOs) told Showtime’s Jim Grey after Saturday’s main event. “I came here from Miami to see this fight.”

It was Ortiz’s first public appearance since a breakdown in negotiations for a discussed June 1 showdown versus unbeaten, unified heavyweight titlist Anthony Joshua. The middle-aged contender was the first pick to replace Jarrell Miller, whose failed drug tests scratched him from the Madison Square Garden show serving as Joshua’s United States debut.

At least two substantial offers were made to secure his services as a late replacement, but all that came of it was exposing the dysfunctionality of his management and promotional team. Ortiz would lose out on a lucrative payday which would instead go to fellow Premier Boxing Champions (PBC) branded heavyweight Andy Ruiz.

The working theory is that Ortiz had already committed to a rematch with Wilder later this year, in hopes of avenging his lone career defeat. If that was the purpose of his traveling to New York this past weekend, it certainly didn’t end with any type of promotion—or even confirmation of any kind regarding such a fight or any other in the near future.

“It’s not uncommon for (PBC fighters) to be in the crowd for PBC events,” Herman Caicedo, Ortiz’s trainer pointed out to BoxingScene.com. “Luis went, wished Deontay luck and then congratulated him on a job well done.

“When he comes back to work on Monday we’re going to do the same thing we’ve been doing since his last win (a 10-round decision over Christian Hammer in March, also at Barclays Center)—begin training very early in the morning, and work hard every day waiting for our next marching orders.”

Ortiz—who has won three straight since last year’s thriller with Wilder—can only hope that his next camp will be for a second title fight and a chance at revenge.

“I don't know if that will be next,” Ortiz admitted of a rematch which remains strictly rumored. “Deontay Wilder is the only one who can say for sure if that fight is next.”

Wilder - Ortiz 2. The least anticipated rematch in the history of boxing. Maybe next to Wilder - Stiverne 2. Although I guess Wilder wanted to just maintain his record of KO'ing every opponent. Woo hoo.

Ortiz sounds hopeless. Should have taken that 7m

Kownacki vs Wilder is a trash fight, another high guard, slow come forward plodder who couldn't KO Charles Martin so has no chance vs Wilder. Ortiz is ok. Would rather Joshua, Fury, Whyte in that order, but Ortiz is probably…

This fight is next, why else would he come into the ring afterwards

The fight he had with deontay was epic very competitive.which that alone deserves a rematch.im sure Ortiz will drop his water and get back into shape in know time