Luis Ortiz fully understands the public outrage over his team not managing to secure an deal as a late replacement to face unbeaten, unified heavyweight titlist Anthony Joshua.

That’s because he and those closest to him are just as frustrated, if not even more so.

“Everything about the way all of this was handled, was a mess,” Herman Caicedo, Ortiz’s career-long trainer told BoxingScene.com of his client losing out—for the moment—on a career-changing payday. “It’s how it played out and is what it is. Everyone had a little truth in everything that's been said and a lot of things that aren't quite true.” 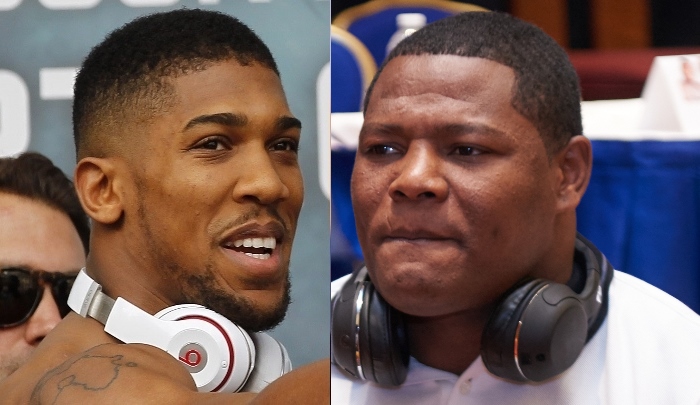 The veteran heavyweight contender was the desired replacement for disgraced unbeaten heavyweight Jarrell Miller to face Joshua on June 1 at Madison Square Garden in New York City. The event marks the U.S. debut for England’s Joshua (22-0, 21KOs), with upwards of 17,000 tickets already sold, therefore postponement not at all an option.

Ortiz (31-1, 26KOs) was among a short list of heavyweights approached by event promoter Eddie Hearn to replace Miller, who tested positive for an array of banned substances within the first three weeks of random drug testing conducted by Voluntary Anti-Doping Agency (VADA). Others were rumored to land the assignment, but Ortiz was the desired choice given his career accomplishments and name recognition.

Things went south in a hurry, however, when those representing Ortiz in negotiations—Dade Promotions and manager Jay Jimenez—not only overplayed their hand, but failed to properly consult with Ortiz and his training team. A reported offer of $5 million—a figure which Hearn has publicly disputed—was deemed as insulting by Ortiz's promoter.

“After 5 days of BS we declined all of Hearn’s lowball offers and we are tired of his games.,” Dade Promotions’ Jorge Carmenate told BoxingScene.com’s Ryan Burton earlier this week. “I know the magnitude of this fight. I wasn’t going to let Hearn bully me. Especially when I know they need Luis. I mean who else could they really have to fight and that the public was willing to pay for?”

The answer to that, for the moment, is Andy Ruiz, who—like Ortiz—is a once-beaten heavyweight who fights under the Premier Boxing Champions banner. Other candidates include unbeaten interim titlist Trevor Bryan—which would free up a mandatory title defense obviously which Joshua will eventually have to fulfill—and 2012 U.S. Olympian Michael Hunter, whom recently signed with Hearn’s Matchroom Boxing.

None carry the notoriety of Ortiz, whom for years has served as a top-rated heavyweight. The Miami-based Cuban southpaw came dangerously close to knocking out Deontay Wilder in their memorable heavyweight title fight last March, rallying from a 5th round knockdown to badly rock the unbeaten titlist late in round seven before being stopped himself mdway through round ten in a fight that was very much up for grabs to that point.

Two wins have followed for Ortiz, looking spectacular in a 10th round stoppage of Travis Kauffman, and far less so in a decision win over Christian Hammer this past March. Fighting three months apart, though, was the type of activity desired by Ortiz despite his having turned 40 in late March.

The consummate gym rat—who literally lives in the gym, with a bedroom at Caicedo’s sports complex in Miami—hasn’t stopped training since his most recent win, in hopes of being ready for any major opportunity. Somehow, that part got lost in translation during negotiations between Hearn and Jimenez.

“So I’m reading that Luis was on “holiday” (vacation), that Jay initially told Eddie that Luis wasn’t ready, which I don’t know he would,” notes Caicedo. “Unless a vacation for Luis means spending time in a different part of the gym, I don’t know where anyone got that information from. His kids are in school, where the hell is he gonna go by himself?

“The only time he took off is when I had to force him to take a stay-cation around Easter, when his kids had a break from school. Even then, he was still at the track every morning like he always is. He’s still jumping rope every day. He’s always training and he’s always ready for a fight. For Joshua, sure we’d love an 8-12 week camp, but we could get ready in five if the fight was signed today.”

As frustrating as this entire ordeal has been, there still remains the issue of having never seen an official offer in writing.

“An opportunity like this to make whatever Eddie is offering - $7-8 million – you grab it,” Caicedo notes. I think it was a rookie mistake on their part to not accept the fight. Luis is still pissed off. He found out when everyone else found out.

“But having said that, Eddie offering it and then putting it in writing are two different things. I personally believe that we would’ve seen an upside-down contract just to stall and renegotiate. Most fighters won’t take a fight until they have a signed contract. There’s a lot of things you can do with a contract to not make a fight happen.”

Still, the frustrating part on Ortiz’s end is his “promoter” not even allowing talks to reach that point.

“I’m upset they didn’t consult me more than they did and that they didn’t take my opinion to heart,” admits Caicedo. “I’m around Luis every day. If we’re saying ‘We’re ready, take the money and the fight,’ you accept the f*****’ offer and make Eddie show you a contract saying it’s real.

“For now, we will continue training because we are always in the gym. Hopefully Wilder does his job against Dominic Breazeale (on May 18) and we get the rematch later this year. But let me be clear—and this is Luis’ exact place on this (subject)—if Eddie shows us a real contract with no games, we will gladly take that fight, whether June 1 or after that.”

[QUOTE=JWHardin;19702766]Google is a wonderful thing, you should try it. It took me 5 seconds to come up with several links about the 24 hr deadline that the WBA gave Joshua for the Povetkin fight. [url]https://www.independent.co.uk/sport/general/boxing/anthony-joshua-next-opponent-alexander-povetkin-deontay-wilder-eddie-hearn-matchroom-a8417371.html[/url] Here is another: [url]https://sports.yahoo.com/anthony-joshua-given-24-hour-110300773.html[/url][/QUOTE] All…

[QUOTE=JWHardin;19705307]You are one of the ****ing idiots that said there was no such thing as a 24 hr deadline concerning Joshua and Povetkin, and a reason to pull out of the negotiations with Wilder at the time.[/QUOTE] Can you find…

[QUOTE=LacedUp;19703259]No one is mentioning a 24 hour deadline :lol1: Completely made up. I think this is the laughable deadline you wanted to bring up: [url]https://www.independent.co.uk/sport/general/boxing/anthony-joshua-vs-deontay-wilder-offer-50m-accept-fight-eddie-hearn-promoter-responds-a8322861.html[/url][/QUOTE] You are one of the ****ing idiots that said there was no such thing as…

[QUOTE=JWHardin;19702766]Google is a wonderful thing, you should try it. It took me 5 seconds to come up with several links about the 24 hr deadline that the WBA gave Joshua for the Povetkin fight. [url]https://www.independent.co.uk/sport/general/boxing/anthony-joshua-next-opponent-alexander-povetkin-deontay-wilder-eddie-hearn-matchroom-a8417371.html[/url] Here is another: [url]https://sports.yahoo.com/anthony-joshua-given-24-hour-110300773.html[/url][/QUOTE] No…

Too late now doe. Especially in this kind of sport. Takes time to make even semi-meaningful fights happen. The same opportunity may never come again.