Oosthuizen Jailed on Drugs Charge, Mchunu Fight is Now Off

Almost predictably, Tommy Oosthuizen’s ambition to return to the ring has been put on ice.

The troubled former IBO champion is in jail on a drugs charge and is due to appear in court on March 19. One bail application has already been unsuccessful.

Consequently, promoter Rodney Berman has scrapped plans to match him with Thabiso Mchunu at Emperors Palace in June. 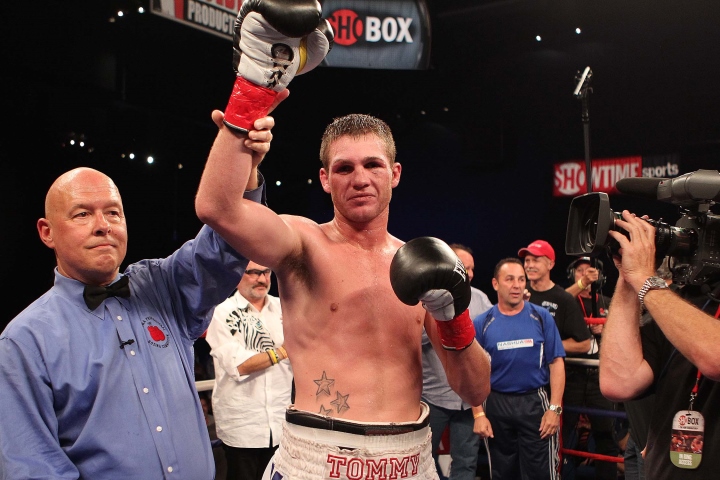 “It’s just too risky,” said Berman, who has been burned by the fighter previously. “There was a good purse on offer, but with his lifestyle and this latest nonsense, we just can’t take the chance.”

The episode puts the kaibosh on what was shaping to be a fascinating fight between two elite southpaws. Mchunu was keen to match his talents against the fast-handed former champion and Oosthuizen, by all accounts, needed the money after losing his way in recent years.

It’s best to never say never in boxing, but it’s difficult to see a way back for Oosthuizen after this. Golden Gloves has shut the door on him before, and here again, but you sense that the lock is now firmly bolted.

“Tommy clearly has a life to sort out,” said Berman, “and my wish is that he does so.”

There might be opportunities with other promoters, but it’s a long shot against him again reaching the heights when he was a top 10 contender and looking to be a major player.

IN OTHER NEWS: With new management, promoter and coaches in place, world-ranked super-lightweight Ohara Davies is quickly shedding his 'bad boy' public persona.

'Two Tanks' (16-1-KO13) has signed with MTK Global, Frank Warren Promotions and recruited a promising young training team as he bids to secure a world title fight in the next 12 months.

Having caused controversy throughout his early career, Davies' latest blonde hairdo belies the shift in his mentality. Ahead of his BT Sport debut on April 14 on the Billy Joe Saunders v Martin Murray undercard, he seems at ease with himself and keen to let his improvements in the ring speak for themselves.

[QUOTE=AdonisCreed;18570642]I always knew this guy was up to no good just throwing away a perfectly good opportunity SMH....... Soooooo Who is this guy I literally just heard of the guy? I don't even know what weight class he fought in…

I always knew this guy was up to no good just throwing away a perfectly good opportunity SMH....... Soooooo Who is this guy I literally just heard of the guy? I don't even know what weight class he fought in…

The only part that surprised me was this dumb azz writer calling him a "champ".And then later getting it rightand saying he was a top 10 contender.Even that a bit of a stretch.Ibo IS NOT a REAL title.

Drug charges covers a lot of territory. Before his soul is cast forever into the boxing pit of despair, does anyone know what the charges are exactly? Something like selling heroin in front of a preschool or something like toking…