Tyrone McKenna’s movement made it challenging at times, but Ohara Davies defeated a southpaw Wednesday night.

After suffering losses to left-handed opponents Josh Taylor and Jack Catterall, Davies out-landed a reluctant McKenna in The Golden Contract’s 140-pound final Wednesday night at Sky Sports Studios in London. England’s Davies (22-2, 16 KOs) landed the harder shots, albeit infrequently, and won a 10-round majority decision in a fight that lacked action.

Judges Howard John Foster and Mark Lyson scored the fight for Davies by the same score, 96-94. Judge John Latham had it even, 95-95.

Belfast’s McKenna (21-2-1, 6 KOs) had only lost to Catterrall, the WBO’s mandatory challenger for Jose Ramirez’s junior welterweight title, before Davies beat him. 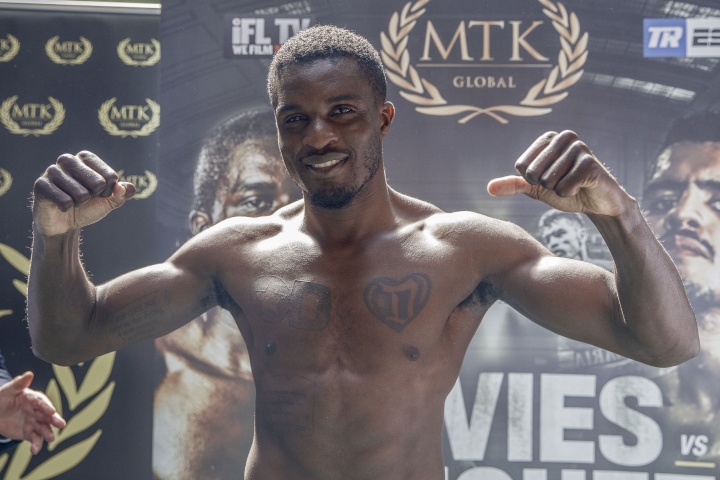 McKenna didn’t really fight with a sense of urgency during the 10th round, even though it appeared he was losing entering those final three minutes. McKenna worked off his jab in that round and landed two short lefts on the inside.

Davies fell to the canvas early in the ninth round, but it was correctly ruled a slip. A lead right hand by Davies landed late in the ninth.

Davies’ right hand landed as McKenna moved into the ropes early in the eighth round. McKenna’s jab knocked Davies off balance late in the eighth.

Davies avoided most of McKenna’s punches in the seventh round. He also landed a flush left hook in an exchange with McKenna late in the seventh.

Davies drilled McKenna with a counter, left hook at McKenna attempted to close the distance early in the fifth round. McKenna nailed Davies with a straight left later in the fifth round, but Davies fired back with a hard right.

McKenna connected with a straight left in the fourth round. Davies stepped back and avoided most of McKenna’s other punches in that round.

Davies landed a right hand as McKenna attempted a left later in the fourth.

Davies caught McKenna with a left hook to the side of his head just prior to the third round ending.

Earlier Wednesday, Serge Michel dropped Liam Conroy three times and stopped him in the fourth round of their Golden Contract light heavyweight semifinal. Germany’s Michel (11-1, 8 KOs) knocked down Conroy (18-6-1, 9 KOs) twice in the fourth round, which led referee Mark Lyson to stop their scheduled 10-rounder 1:39 into the fourth.

Conroy’s difficulty began just before the end of the third round, when Michel landed a right hand to the side of his head that sent Conroy to one knee. Conroy, bleeding from his nose and a cut near his hairline, got up and the bell rang soon thereafter to end the third round.

An overhand right by Michel knocked Conroy on his back in the fourth round. He was hurt by that shot, yet he got up again.

Michel quickly sent him to the canvas for the third time, with a right uppercut. Conroy reached his feet a third time, but Lyson determined he shouldn’t continue.

It looked like they were taking turns to win rounds. I had Ohara winning 7-6 because his punches were much harder

Fight, if you can call it that, was pure and utter bollocks. Mimoune should get the opportunity to school Ohara and McKenna honestly needs to give ****ing Lewis Benson a rematch

[QUOTE=deathofaclown;20787324]Yeah it was a close fight but I think to give Davies 6 rounds out of the 10, you would really to have to look for reasons to give him some of those rounds. Then Again, McKenna wasn’t exactly landing…

No points today but I'm good with my pick. Close fight, no complaints.

[QUOTE=Citizen Koba;20787322]Pfft. Not exactly a robbery but I don't like it. On the plus side at least I got some PICK EM points.[/QUOTE] Yeah it was a close fight but I think to give Davies 6 rounds out of the…