Tugstsogt Nyambayar is now one fight away from returning to the title picture.

The 2012 Olympic Silver medalist from Ulaanbaatar, Mongolia was among the benefactors from the “Mandatories” session of the 58th Annual World Boxing Council (WBC) convention on Thursday. A motion was passed for Nyambayar’s upcoming clash versus Mexico’s Eduardo Ramirez to now serve as an official WBC featherweight title eliminator.

The bout takes place September 19, live on Showtime from Mohegan Sun Casino in Uncasville, Connecticut. The winner will be in line to next challenge reigning WBC 126-pound titlist Gary Russell, Jr., against whom Nyambayar (11-1, 9KOs) suffered his lone career defeat in as 12-round loss this past February in Allentown, Pennsylvania.

Nyambayar—who now lives and trains in the greater Los Angeles area—was the mandatory challenger at the time. However, because Russell has only fought once a year ever since winning the belt in 2015 he is now presented with the scenario of making back-to-back mandatory defenses and potentially against the same opponent.

“The lack of activity with Gary Russell Jr. is concerning,” Maurcio Sulaiman, president of the WBC addressed during the convention. 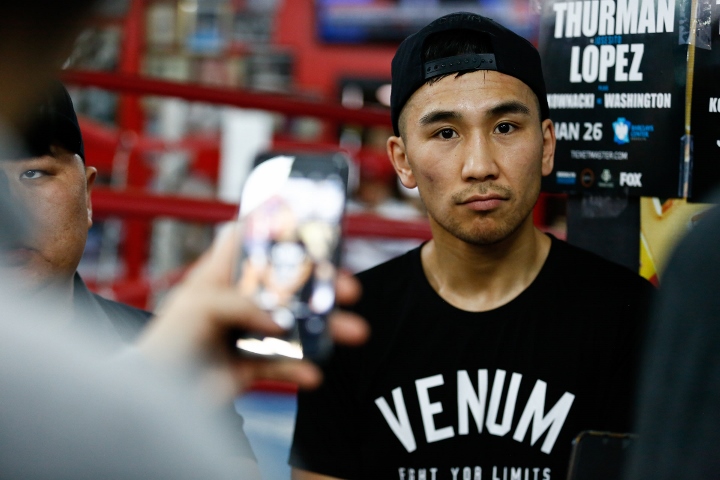 Enabling the move was the removal of Jessie Magdaleno (28-1, 18KOs) from the top spot in the latest round of ratings updates. The former 122-pound titlist from Las Vegas is now committed to a fight with Mexico’s Emanuel Navarrete (32-1, 28KOs) for the vacant World Boxing Organization (WBO) featherweight title this October in Las Vegas.

With the move, Nyambayar was elevated to the number-two slot, behind England’s Kid Galahad. Given the existing fight between Nyambayar and Ramirez (23-2-3, 10KOs), there came a proposal to help remedy the situation. Sampson Lewkowicz, Ramirez’s promoter noted that given two of the top five ranked featherweights were already set to fight that it should be sanctioned as a final eliminator.

Per WBC rules, all that stood in the way was the plans of its number-one contender. Unfortunately, Galahad—who is also the number-one contender with the International Boxing Federation (IBF)—is without marching orders for his next fight. As such, the hope was for the matter to be tabled pending clarification.

“We don’t know yet,” Eric Bottjer, executive matchmaker for Matchroom Boxing noted of Galahad’s current schedule. “If we are ordering the elimination today, we can let you know by the end of business day tomorrow.”

That response did not fly with El Presidente.

“That is a very complicated statement,” Sulaiman replied. “We understand it’s a business, but it would be embarrassing to let (someone outside the WBC) decide.”

There existed a brief moment where an offer was made to table the matter until a voice or reason emerged.

“If we are meeting now and being offered in these difficult times a match that has been made, it seems only fair to accept what is in our hands now,” stated Rex Walker, governor of WBC. “Not wait 24 hours to see who may be available.”

Nyambayar has not fought since the aforementioned loss to Russell in February. Ironically, it came on the same day that Galahad (27-1, 16KOs) reclaimed his mandatory status with the IBF, thanks to a one-sided 8th round stoppage win of Claudio Marrero in his Sheffield hometown.

Ramirez has won three of his last four starts since a title fight loss to then-reigning IBF champ Lee Selby in December 2017. The 27-year old southpaw from Los Mochis, Mexico is coming off of a 4th round knockout of previously unbeaten Leduan Barthelemy last November in Las Vegas.

How nice would it be for Al and Bob to give us GRJ vs. Stevenson @ 130, on the undercard of Wilder vs. Fury III? A little upset that Stevenson moved up without fighting GRJ @ 126!

Solid fight, looking forward to it

GRJ maybe came a bit early for Tug whose a great talent and always fun to watch. At last the WBC are concerned with GRJ's lack of activity. Most of us have been feeling that for a while.

Nyambayar impressed me very much in his last outing against Gary. He is a very tough customer.