Nyambayar: I Had A Sprained Ankle Against Gary Russell; I'd Love A Rematch

Tugstsogt Nyambayar believes his fight against Gary Russell Jr. would’ve unfolded differently had he not been limited by a sprained right ankle.

The featherweight contender revealed Thursday during a virtual press conference that his injured ankle hindered him the night he lost to Russell seven months ago. Nyambayar twisted his ankle during training camp and said it restricted roadwork while preparing for the biggest fight of his career.

“It was not a severe ankle injury, but I had a little injury before the fight,” said Nyambayar, who will battle Cobia Breedy on Saturday night. “I had much less running during camp than usual.” 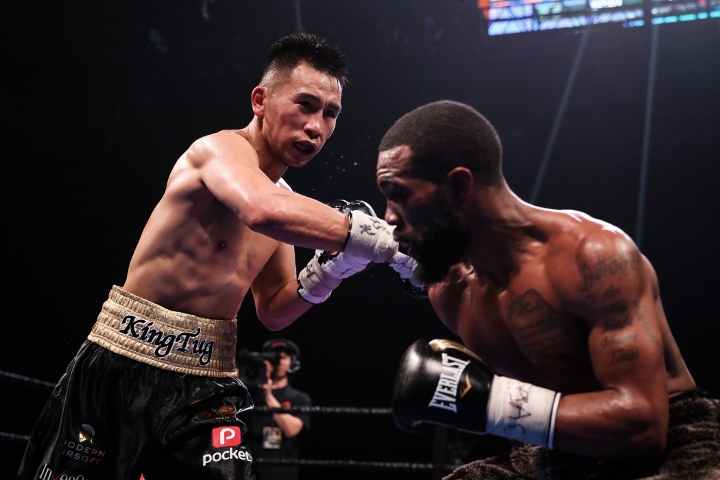 Nyambayar suffered his first professional defeat to Russell (31-1, 18 KOs), who beat the Mongolian challenger by unanimous decision in their 12-round fight February 8 in Allentown, Pennsylvania.

“My ankle was hurting in the fight,” Nyambayar said. “I [was] not using my legs and movement. Just moving [my] chest and head movement.”

The 28-year-old Nyambayar, a 2012 Olympic silver medalist, was the mandatory challenger for Russell’s title. Russell, boxing’s longest-reigning champion, wants higher-profile fights, but Nyambayar hopes that the skillfull southpaw would consider a rematch.

“If he wants, I would rematch [him],” Nyambayar said. “I would love to fight him again.”

Nyambayar (11-1, 9 KOs) will box Breedy (15-0, 5 KOs), of Hyattsville, Maryland, in his first fight since losing to Russell. The Nyambayar-Breedy bout will be the second of three fights Showtime will televise from Mohegan Sun Arena in Uncasville, Connecticut (9 p.m. ET/6 p.m. PT).

Nyambayar was supposed to encounter Eduardo Ramirez on Saturday night. Mexico’s Ramirez (23-2-3, 10 KOs, 1 NC) withdrew from what was supposed to be a WBC elimination match late last month for an undisclosed reason.

Whatever occurs, Nyambayar feels closer to 100-percent healthy today than when he fought Russell.

“I feel much better physically, mentally,” Nyambayar said. “I trained eight weeks, hard training. I had eight weeks [of] good training. I’m ready for this Saturday night for a good show. Watch me.”

[QUOTE=Squ□redCircle34;20768611]Notice how low the comments is for Tug‘a excuses but for certain other fighters after they make excuses they get called out their name an or clowned on! He simply wasn’t experienced enough to beat Russell jr yet, I think…

[QUOTE=Squ□redCircle34;20768611][B]Notice how low the comments is for Tug‘a excuses but for certain other fighters after they make excuses they get called out their name an or clowned on![/B] He simply wasn’t experienced enough to beat Russell jr yet, I think…

Notice how low the comments is for Tug‘a excuses but for certain other fighters after they make excuses they get called out their name an or clowned on! He simply wasn’t experienced enough to beat Russell jr yet, I think…

Tug is one tough cookie. Pushed GRJ to the very limit. I believe he has what it takes to be a belt holder some day.

I thought Tug came on in the later rounds but just waited too long. I'd love to see a rematch too.