Tugstsogt Nyambayar didn’t get the knockout that seemed inevitable early in his fight with Cobia Breedy on Saturday night.

The Mongolian featherweight contender barely beat Breedy by split decision in the second of three fights Showtime televised from Mohegan Sun Arena in Uncasville, Connecticut. Judge Don Trella scored their fight for the previously unbeaten Breedy (115-111), but judges Glenn Feldman (114-112) and Steve Weisfeld (114-113) scored it for Nyambayar by slimmer margins.

The two knockdowns Nyambayar recorded, one apiece in the first and second rounds, ultimately prevented the 2012 Olympic silver medalist from suffering his second straight defeat.

Instead, Nyambayar (12-1, 9 KOs) bounced back from his first loss in his previous appearance – a 12-round, unanimous-decision defeat to WBC featherweight champion Gary Russell Jr. (31-1, 18 KOs) on February 8 in Allentown, Pennsylvania. Nyambayar hopes to secure a rematch with Russell and, if nothing else, maintained his position as the number two contender in the WBC’s 126-pound rankings by beating Breedy (15-1, 5 KOs) in their elimination match. 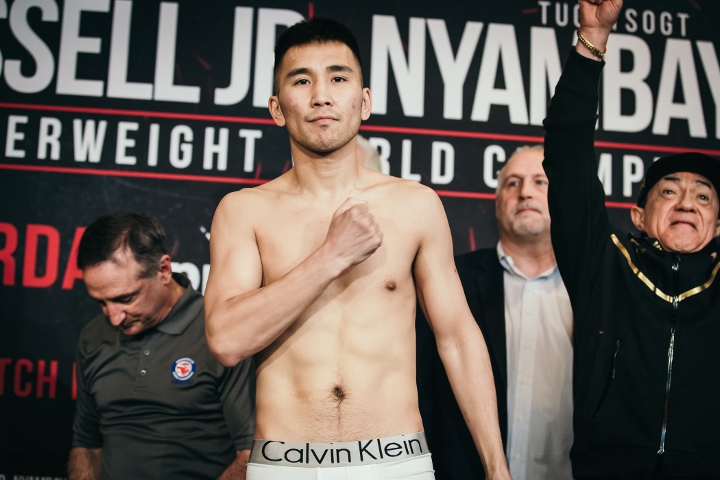 Nyambayar admitted he was surprised that Breedy won on Trella’s scorecard, but he commended Breedy.

“It was a tough fight,” Nyambayar said. “I have a lot of respect for Cobia Breedy. It was a very tough fight. He’s a great boxer. I think I won the fight. I got the job done. I’m ready for the next step.”

Nyambayar was supposed to encounter Eduardo Ramirez in the second of three fights Showtime televised Saturday night. Mexico’s Ramirez (23-2-3, 10 KOs, 1 NC) pulled out of their fight after testing positive for COVID-19 last month, which led to Breedy accepting the toughest fight of his career on about five weeks’ notice.

Breedy – a Hyattsville, Maryland, resident raised in Barbados – delivered an admirable performance in the most noteworthy fight of his five-year pro career. He overcame two early knockdowns and traded at times with a much harder puncher.

Nyambayar unloaded a combination on Breedy about 30 seconds into the 12th round. A left-right combination by Nyambayar backed up Breedy with just under two minutes to go in the fight.

Breedy connected with a right hand with

Nyambayar landed a right hand with about 40 seconds to go in the 11th round. Breedy quickly responded with a combination that knocked Nyambayar off balance.

Nyambayar drilled Breedy with two hard right hands in the middle minute of the 10th round. A resilient Breedy fired back, though, and prevented Nyambayar from capitalizing on that momentum.

Breedy landed a left-right combination when Nyambayar was backed against the ropes toward the end of the 10th round.

Referee Danny Schiavone instructed a ringside physician to examine the swelling above Breedy’s right eye before he allowed the ninth round to begin.

Nyambayar landed a right uppercut, but Breedy countered with an overhand right with just over two minutes remaining in the ninth. Breedy’s lead right hand connected with just under 1:20 to go in the ninth.

An overhand right by Breedy landed flush with a few seconds to go in the ninth round. That shot made Nyambayar hold Breedy just before the bell sounded.

Nyambayar landed two lefts on a retreating Breedy with just under 1:20 to go in the eighth round. Breedy tried to keep away from Nyambayar throughout that eighth round, and didn’t throw many punches.

Breedy nailed Nyambayar with an overhand right with 45 seconds to go in the sixth round and quickly moved out of Nyambayar’s punching range.

Nyambayar and Breedy traded right hands with just over a minute to go in the fifth round. Breedy out-landed Nyambayar during that round, though, and made Nyambayar miss more often than not.

Breedy landed a right hand with about 25 seconds to go in the fourth round. Nyambayar responded with a flurry, including a flush right hand.

Undeterred by knockdowns in each of the first two rounds, Breedy backed up Nyambayar at times during the third round. Breedy landed a right hand with just under 20 seconds to go in the third round.

A right-left combination by Nyambayar knocked Breedy to the canvas for the second time in the bout 51 seconds into the second round. Breedy answered Schiavone’s count again, regained his composure and continued to be aggressive against a bigger puncher.

Nyambayar landed several more hard shots later in the second round, but Nyambayar bled from his nose by the end of that three-minute stretch.

Breedy backed up Nyambayar with a left hand 25 seconds into the first round. A left hook by Breedy also landed barely a minute into their bout.

Breedy got up, answered Schiavone’s commands and was allowed to continue.

The Tim Bradley clone was good. Not as good as the real thing but definitely a very decent fighter.

Also, I hope GRJ vacates and moves up and Tug gets a shot at the vacant belt

Breedy can come again, tough guy, gave a good account of himself. I'd like to see Breedy vs Tyler McCreary

Idec how did you score it?

Breedy IMPRESSED me!! Call him the 2nd coming of Timothy Bradley. Tough.Tough.Fighter.