The WBC has reinstated Nordine Oubaali as its bantamweight world champion, eliminating the “champion in recess” tag it had given him in mid-November after he came down with Covid-19 and was forced to drop out of a title defense against former champion and mandatory challenger Nonito Donaire.

Initially, the WBC made Oubaali a “champion in recess” and approved former four-division world titlist Donaire to take on former bantamweight titlist Emmanuel Rodriguez, who was willing to step in on short notice, for the vacant title in the main event of a Showtime-televised card on Dec. 19 at the Mohegan Sun Arena in Uncasville, Connecticut.

However, Donaire also tested positive for Covid-19 a little more than a week before the bout and although he claimed the test result was a false positive he was nonetheless dropped from the fight with Rodriguez. At that point, the WBC approved a fight between Rodriguez and Reymart Gaballo for the vacant interim WBC bantamweight belt. The fight headlined the card on Dec. 19 and Gaballo won a disputed split decision. 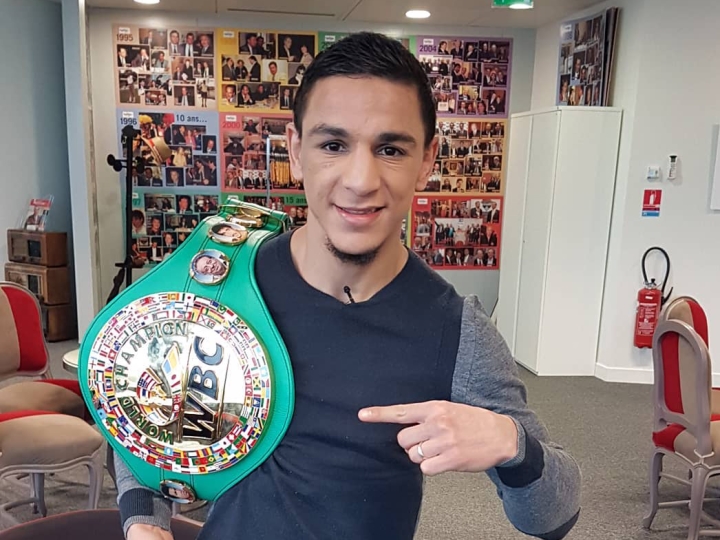 But with Oubaali and Donaire having both dropped out of the title bout due to Covid-19, WBC president Mauricio Sulaiman recently sent a letter to the various parties involved notifying them of the change in status of Oubaali’s title and outlining other aspects of the situation.

In the letter, a copy of which was obtained by BoxingScene.com, the WBC said it would “remove the Champion In-Recess designation from WBC Bantamweight World Champion Nordine Oubaali.” Also, the letter reiterated a previous pronouncement that the interim champion would not automatically be the mandatory challenger without the organization issuing a specific order saying so.

“The WBC will continue to monitor Champion Oubaali’s and Nonito Donaire’s condition with views of determining when they will be medically cleared and fit to return to the ring,” the WBC letter continued. “The WBC will allow Champion Oubaali to make a voluntary defense of his World Title in February of 2021, based on the WBC’s determination that he is medically cleared and fit to do so. Based on the availability and medical clearance of the WBC World Champion, WBC Interim Champion and Nonito Donaire, the WBC will reassess the overall situation of the division and will issue a more definitive order (later this month).

“Given the uncertainties associated with the ongoing Covid-19 pandemic, the WBC shall have the sole right and option under our Rules & Regulations to issue additional orders concerning the Bantamweight Division, as it becomes necessary.”

Oubaali and Donaire have both said they still want to fight and their teams are working on whether the bout will be immediately rescheduled, a source with knowledge of the situation told BoxingScene.

The 34-year-old Oubaali (17-0, 12 KOs), a southpaw and 2008 and 2012 Olympian from France, has defended his 118-pound world title twice since winning the vacant belt by unanimous decision over Rau’shee Warren in January 2019 on the Manny Pacquiao-Adrien Broner undercard at the MGM Grand in Las Vegas.

In his first defense, Oubaali scored a sixth-round knockout of Arthur Villanueva in July 2019 and then unanimously outpointed Takuma Inoue – the younger brother of unified bantamweight champion Naoya Inoue – in his second defense in November 2019.

“The Filipino Flash” Donaire (40-6, 26 KOs), 38, of Las Vegas, who has won world titles at flyweight, bantamweight, junior featherweight and featherweight, is seeking a third bantamweight world title reign. He has not boxed since November 2019, when he participated in the fight of the year, a hard-fought decision loss in a bantamweight title unification fight with Naoya Inoue in the final of the World Boxing Super Series. Oubaali’s win over Takuma Inoue was on that undercard.

[QUOTE=GodfatherIV;21010414]More WBC bull****. Why do all this ruling. If Oubaali and Donaire were going to fight with the title on the line but got cancelled due to Covid, [B]just redo that fight[/B] and be done with it. [B]Its simple no…

[QUOTE=Mick Higgs;21011330]What I don't get is how a guy who lost his last fight can just walk into another World title fight.[/QUOTE] Donaire is a legend and first ballot hall of famer and deserves at this stage of his career…

What I don't get is how a guy who lost his last fight can just walk into another World title fight.