Nonito Donaire Excited By Thought Of Rigondeaux Rematch At 118 Pounds

Aligning himself with Al Haymon’s Premier Boxing Champions might mean Nonito Donaire can attempt to avenge one of his most disappointing defeats.

Donaire and Guillermo Rigondeaux both have moved down to the bantamweight division and are affiliated with PBC. If Donaire can win his next fight, they each would own world titles at 118 pounds, too.

Seven years after Rigondeaux defeated him in their 122-pound title unification fight, Donaire is intrigued by the idea of a rematch with the Cuban southpaw.

“You know me, man. I’m a fighter. I’ll fight anybody,” Donaire told co-hosts Kenneth Bouhairie and Michael Rosenthal during an newest episode of “The PBC Podcast” on premierboxingchampions.com. “But mainly, [bantamweight] is my territory. So, I’m excited with that one as well, the thought of it.”

Donaire dropped Rigondeaux in the 10th round, but the two-time Olympic gold medalist defeated Donaire on all three scorecards in April 2013 at Radio City Music Hall in New York. 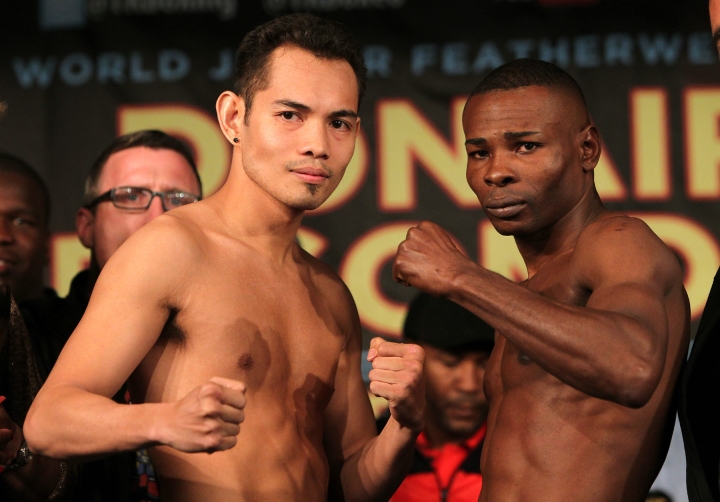 The 39-year-old Rigondeaux (20-1, 13 KOs, 1 NC) moved down from 122 pounds to 118 for his bantamweight debut in his last fight. He floored Liborio Solis in the seventh round and topped Panama’s Solis (30-6-1, 14 KOs, 1 NC) by split decision to win the then-vacant WBA world bantamweight championship February 8 at PPL Center in Allentown, Pennsylvania.

The 37-year-old Donaire rejuvenated his career with an impressive performance in his most recent appearance. The five-division champion gave Japanese star Naoya Inoue the most difficult fight of his career in the final of the World Boxing Super Series’ bantamweight tournament.

Inoue (19-0, 16 KOs) out-pointed Donaire (40-6, 26 KOs) by big margins on two scorecards and won a 12-round unanimous decision, but Donaire drilled Inoue with a right hand that hurt him in the ninth round November 7 in Saitama, Japan. Two rounds later, Inoue made Donaire take a knee after landing a hard left to his body.

The Boxing Writers Association of America voted Inoue-Donaire its “Fight of the Year” for 2019.

Before he could seriously consider a Rigondeaux rematch, Donaire would have to defeat France’s Nordine Oubaali (17-0, 12 KOs) in his first fight following the COVID-19 pandemic.

They were tentatively scheduled to meet May 16 for Oubaali’s WBC bantamweight title. Donaire is the WBC’s mandatory challenger for Oubaali’s belt.

“I hope so,” Donaire said regarding the Oubaali bout being rescheduled. “I believe so. I mean, nothing is really clear at this time. It was for May 16th, and it just went out the window. And, you know, they’re trying to figure out what’s going on with boxing, and how they’re gonna go on in the next phase and doing it. So, I’m hoping that it’s still the same thing and I’m still kinda training for that.”

Las Vegas’ Donaire is 2-1 at bantamweight since he dropped down two divisions following a lopsided, 12-round, unanimous-decision defeat to Northern Ireland’s Carl Frampton two years ago in Belfast. Donaire held the WBC and WBO bantamweight titles in 2011.

[QUOTE=Califire209;20592967]Nah, the people need The Monster vs The Jackal[/QUOTE] One of many intriguing potential 118 fights, but unlikely to happen given the line-ups that were supposed to happen and remain most likely, mainly Inoue v Casimero and Donaire v Oubaali,…

Hell why not??? lets get it...hopefully he wont keep pointing at his eye this time

I have always liked Nonito. I used to pass by him when he would go jogging and he always seemed like a down to earth guy. Good to see him still working hard.

Nah, the people need The Monster vs The Jackal

Rigondeaux is there for the taking, Donaire avenges his earlier defeat and blasts Rigo into another dimension