Nikitin: Conlan Will Regret This, I Beat Him Twice, I'll Win Again!

Michael Conlan will have the chance to avenge his famously controversial Olympic decision defeat to Vladimir Nikitin at Belfast’s Féile an Phobail festival on August 3.

WBO Inter-Continental champion Conlan (11-0, 6 KOs) has gone from strength to strength as a professional since the highly-contentious loss to Russia’s Nikitin at the 2016 Olympic Games in Rio.

Their long-anticipated rematch will be part of Féile an Phobail in west Belfast - the biggest community festival in Europe. 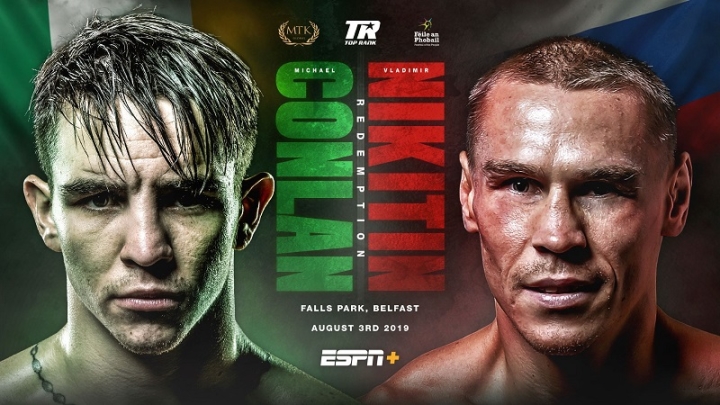 “He is an inspiration to so many young people, showing what dedication, commitment and hard work can achieve.

“Last year Michael said he wanted to fight this summer in the Falls Park as part of Féile an Phobail. We have worked non-stop since then with Jamie Conlan and MTK Global and with Top Rank Boxing, to make this happen, and now it is confirmed.

"On Saturday 3 August, Féile an Phobail will be immensely proud to host a major 8,000 capacity fight night at our event space in the Falls Park in west Belfast headlined by Michael Conlan.”

Top Rank Boxing Chairman Bob Arum said: “This is the opportunity for Mick Conlan to put right what most observers felt was an injustice.

“That being said, Nikitin is a real aggressive fighter, and he believes that a victory over Conlan in August would cement the one he was given in the Rio Olympics.”

Nikitin (3-0) has won all three of his fights since turning professional, and he’s relishing the chance to share the ring with Conlan again.

Nikitin said: “When I turned professional last year, the man I wanted to fight most was Michael Conlan. Michael has said a lot of things since the Olympics about how he was robbed of a medal.

“Well, I am coming to his hometown during their biggest festival to show everyone my Olympic victory was not a fluke. This is going to be repeat, not revenge.

“Conlan will regret pushing for this fight. I beat him twice in the amateurs and will do the same as a pro. It will feel even sweeter to beat him in his hometown. Belfast here I come!"

Nikitin's handlers either have far too much confidence in him or far too little. Fighting Colan after only three pro fights seems like a bad idea.

Conlan is lucky to get this matchup in Belfast. Probably wont get ko'd but he will definitely get the decision. Earning it doesn't matter. We all know and unfortunately expect that in this sport.