CEBU CITY, Philippines  --   Filipino three-division world champion Donnie Nietes, together with his coaches Edito Villamor and Edmund Villamor of the ALA Boxing Stable held an engaging farewell press conference with members of Cebu Sports Media today (Aug 3) at St. Mark's Hotel in Cebu City as Donnie and his ALA boxing team fly to Los Angeles tomorrow (Aug 4) - ahead of his world title fight against Aston Francis Palicte September 8 in the co-main event of HBO's highly successful SUPERFLY 3.

The experienced 36 year-old Nietes (41-1-4, 23 KO's) born in the Philippine Visayas Province of Negros Occidental will face fellow Filipino, hard-swinging warrior Aston "Mighthy" Palicte (24-2, 20 KO's) for the vacant WBO super flyweight strap; a clash that will mark the third time in history that two Filipino fighters meet in the square ring to battle a world title in pro boxing.

During the presser, Donnie Nietes and his coaches, Edito and Edmund, looked confident and in good spirits while facing the important task ahead of them.

"We are confident because we have already spent weeks of hard training and sparring in the U.S.A. and also here and will will be ready for this important fight come September 8," said Edito Villamor, head coach of the famed ALA Boxing Gym.

"Plus, Donnie has the experience and the ring smarts to overcome a strong, taller opponent as Palicte."

"He even fought and beat a cousin of mine years ago during the amateur years.    Palicte's home in the Province of Negros Occidental is near my own home.    We come from the same part of the Philippines; and I am aware that Palicte is a very big fighter wanting to overpower me."

Nietes has been a long time world champion and is the star attraction of the highly successful Philippine boxing outfit ALA Boxing Promotions.

Members of the Cebu Sports media asked questions during the presser.

A reporter's question:  "Coach Edito, if your fighter Donnie Nietes beats Aston Palicte in SUPERFLY 3, who would you like him to fight next?"

"If Donnie beats Palicte, and I believe he will, I would like Donnie to fight Mexican former world champion Juan Francisco "Gallo" Estrada.   I know the Mexican Estrada well.   He fought Melindo in a war.     Estrada is a really good fighter, a tough challenge to overcome.   So, I think Nietes-Estrada would be a great fight.   But first we have to deal with Palicte.   We respect him and do not overlook pass anybody," replied the poupular 37 year-old head coach Edito Villamor, a former world class fighter himself. 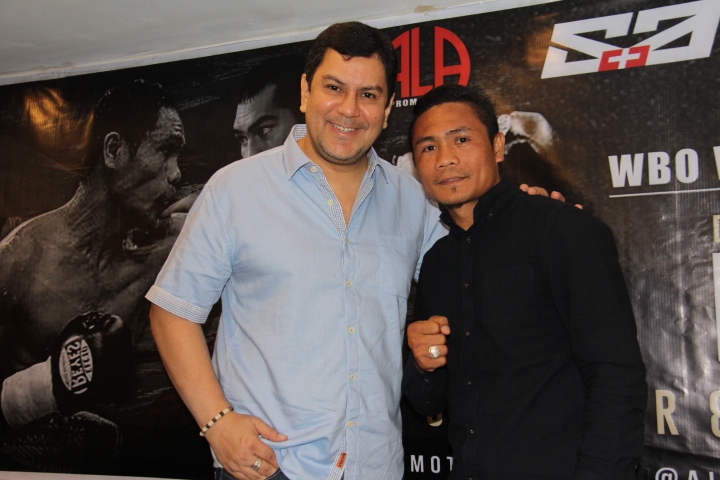 Meanwhile, coach Edmund Villamor, younger brother of Edito, also expressed his 100% trust in the ring smarts and experienced of Nietes, whom he helped develop from a skinny 4-rounder rookie boxer into a world class fighter.

"Boxing is our work.   We know what to do in the ring.    Donnie, Edito and me fly from Cebu to (the Philippine's Capital) Manila and from there to Los Angeles on Philippine Airlines.   The rest of the ALA team will join us two weeks before the fight," assured the bald Edmund, a retired former 105-pounder boxer, now probably a super middleweight. 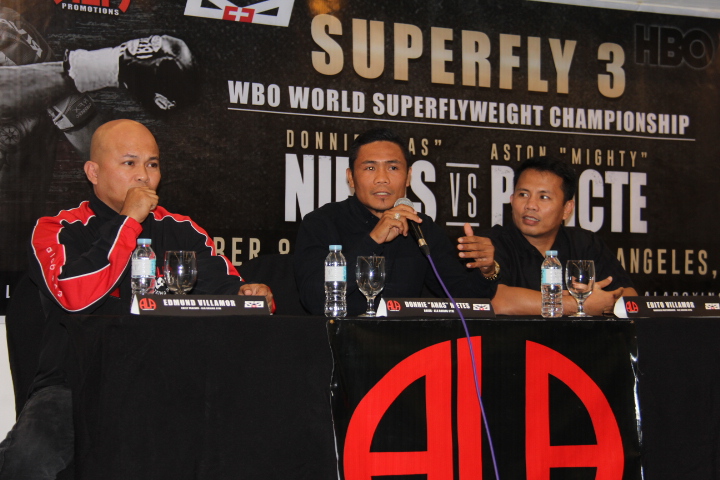 Nietes vs. Palicte is one of the three hot fights scheduled to thrill fans on HBO's SUPERFLY 3 September 8 at the legendary Forum in Inglewood, California; the main event being the 12-rounder clash between popular hard-puncher Mexicans Juan Francisco "Gallo" Estrada (36-3, 25 KO's) of Hermosillo, Sonora and Felipe Orucuta (36-4, 30 KO's) of Ciudad Nicolás Romero in El Estado de México.

In addition, the card features sensational 3-Division world Champion Kazuto Ioka (22-1, 13 KO's) of Osaka, Japan, colliding like a train against Puerto Rican McWilliams Arroyo (17-3, 14 KO's).  Ioka has been out of the ring since April of last year, and is now aiming at a world title shot against any of the world champions in the super flyweights.

The author Carlos Costa is a Panama-born Boxingscene.com fight reporter based in Cebu, Philippines.   Carlos can be reached by email:  Carlos512@hotmail.com and Whatsapp/Viber:  +639184538152.