Tickets for the Heavyweight debut of pound-for-pound star Oleksandr Usyk against Carlos Takam on Saturday May 25 at the MGM National Harbor in Oxon Hill, Maryland live on DAZN in the US and on Sky Sports in the UK, go on pre-sale today at 10am ET.

Undisputed Cruiserweight king Usyk (16-0 12KOs) made the move to Heavyweight following his domination of the Cruiserweight division over the last 18 months, winning the inaugural World Boxing Super Series and then bowing out at 200lbs with a KO win over Tony Bellew in Manchester, England.

The Ukrainian hero begins his assault on the Heavyweight division with a tough test against rugged French-Cameroonian Takam (36-5-1 28KOs), the former World title challenger heading into the clash on the back of a return to winning ways with a KO win at The O2 in London, England in December, the same venue he shared a fight of the year contender with Dereck Chisora in July.

Tickets go on general sale at 10am ET on Thursday April 11 via Ticketmaster at this link: https://www.ticketmaster.com/event/15005688E0B851B0 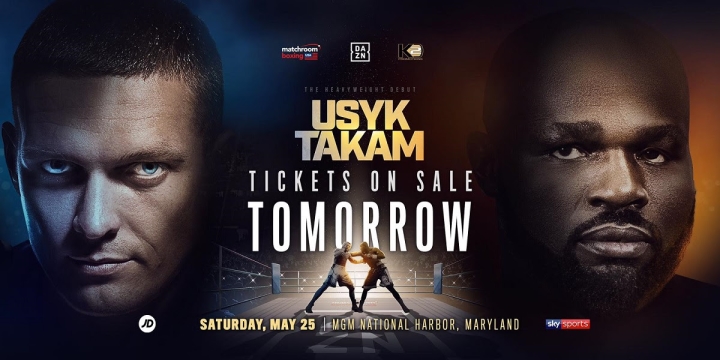 Ilford boxer Umar Sadiq will be stepping into the ring at The SSE Arena, Wembley on April 27th for fight number six of his professional career- but he could easily have stuck with counting numbers on a computer screen instead of lacing up the gloves if he hadn’t made a necessary sacrifice.

A short time ago, Umar’s full-time job was working as an accountant after graduating in accountancy at London Metropolitan University.

“It was the first time I had an office job and I kept it for a year and a half which I’m quite proud of actually!” joked Sadiq when speaking to TalkSPORT.

He continued; “But, I love boxing so much that I decided to pack in the day job to focus on doing what I really love, and now I live a blessed life doing what I love day by day.”

The decision to sacrifice financial security for chasing a dream would be a leap too far for many, and Umar admitted there were obstacles which needed to be overcome.

“I had a lot of people around me including my mum and she told me “You’re mad! How you going to survive and make money?!”- and I actually didn’t know! I just felt it in my gut that this is what I wanted to do.

“When everyone around you is doubting you, including family, and more importantly, people whose opinion you respect, you start questioning yourself.

“But if you want to do it enough and are brave enough, then ultimately at some point you will go ahead and do it. I see myself as a doer and I just thought ‘I’m just going to do it!’”

Umar goes into his six-round contest on April 27th coming off a stoppage victory against durable journeyman, Jevgenijs Andrejevs in early March.

The second-round demolition job on his Latvian opponent came after taking a first loss in his pro career against Fulham-fighter, Zak Chelli - who is also on the bill at The SSE Arena, Wembley.

Now back to winning ways, Sadiq will continue on his path towards what he set out to achieve in the sport and hopefully inspire other people in the same shoes as his own in the process.

“I’d like to be an example to others who wish to take the leap and tell them ‘look, I took the leap and I’ve done well, so maybe you can to.’”

Jazza Dickens is honoured to be returning to Liverpool for the first time in over three years as he prepares to face Nasibu Ramadhan in a final eliminator for the Commonwealth featherweight title at the Olympia on April 19.

Dickens (25-3) is the main event as #MTKFightNight returns to Merseyside, with Dickens back at the venue where he made his professional debut.

That bout was on the undercard of a Derry Mathews fight, and with Mathews now in the corner of Dickens, the Liverpool star feels everything has come full circle as he prepares to represent his city.

Dickens said: “Liverpool is my home. I love this place and my first professional fight was in the Olympia on the undercard of Derry Mathews.

"It was ram packed and was unbelievable. Since then I’ve topped bills and won titles at the Olympia, but this time I’m going back to the Olympia with Derry in my corner to fight for my city.

“When I say I love Liverpool I really mean I have a passion for the people in my city. I love them as they are the salt of the earth, and the support has been bigger than ever before.

“I couldn’t tell you why that is but I have really taken off since going away for a while, and I can only keep repeating myself but thank you Liverpool. It’s the best feeling headlining, and I soak it all up.

“I enjoy the warm up, the ring walk, the announcement, the referee’s instructions, the fight, the corner instructions and the hugs and kisses afterwards! I hope that Liverpool know the words to Solsbury Hill by Peter Gabriel, because it’s going to be an incredible atmosphere.”

Is it just for this thread we are allowed to say dick without it being censored? Intradasting.....

Any bet if I say Jizza Dickens it's censored... Edit: Wow, so I guess it isn't. what if his first name was dick? Dick Dickens