Fornling claimed the IBF belt at home with a unanimous points win over the previously undefeated Arijan Sherifi before going behind enemy lines to secure his first defence against Danish boxer Jeppe Morell in Copenhagen.

The 29 year-old says he is excited to be fighting on a huge card for Swedish boxing, topped by domestic rivals Otto Wallin and Adrian Granat, and aims to prove he is ready to challenge for bigger titles by defeating Horejsek on the undercard of their hotly anticipated European Union heavyweight showdown.

“I’m very eager to step into the ring again - the fact that it is on the card of an event with one of the biggest domestic fights ever, makes it even more exciting. My opponent Karel Horejsek is a very tough fighter. I saw his last fight against a top contender, Rocky Fielding, and he put a lot of pressure on him," he says.

“He looks fit and he looks strong so I expect a war in the ring! He will come forward and try to get on the inside and trade shots, while I will try to keep the distance and control the fight from there, but if it does come to close combat, I’m happy to give him a lesson in dropping bombs from up close as well.

“I want a bigger title fight after the summer, it’s been a long time coming, and I feel I’m more than ready for bigger fights. At the same time, I know I must take it one fight at a time. I cannot afford to overlook this opponent, so right now, all my full focus is on beating Horejsek. I eat, sleep and live for April 21 at the moment.” 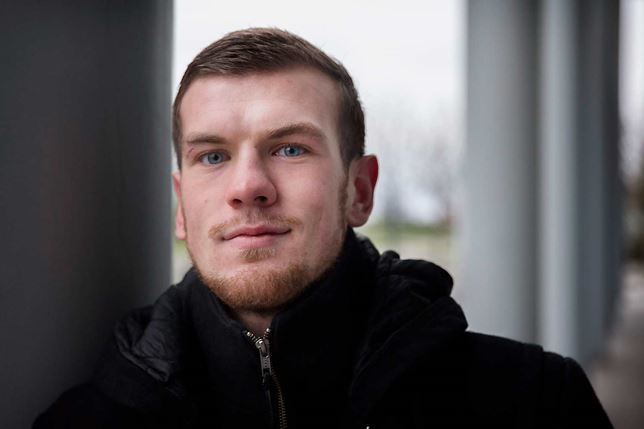 The 24 year-old is a native of Brooklyn, New York had a stellar amateur career that saw him win 17 National championships.beginning at 11 years old when he won the National Silver Gloves championship.

Ceballo also captured the 2014 World Series of Boxing Team Trials, and was a Olympic trials semifinalist.

Besides boxing, Ceballo is a well rounded individual as he plays the piano, guitar, and has been singing since he was 15 years-old.

"Brian has been the top amateur welterweight in New York, as well as the United States for the past several years. He has proven time and time again that he is an elite fighter and I'm glad he decided to have Split-T Management guide his professional career to the top of the welterweight division," said Split-T Management CEO David McWater.

"I first met (CEO of Split-T Management) David McWater at the 2016 National Golden Gloves, which I won. I wasn't ready to turn professional, but we talked. I told him when I do turn professional, you will be the first I talk to," said Ceballo. "After that, we kept in touch and after I won the US Nationals Championships in 2017, I reached out to him and said that I wanted to turn professional. I would talk to other managers, some who appeared to offer me better deals, but I decided to sign with him because I had a great relationship with him, and I liked him as a person. I felt that he would do the best for my career."

Ceballo sees himself as a player in the competitive 147-pound division.

"The welterweight division has always been a glamour division where the best fighters are at. In a few years, I will be up there with best and become a world champion!"

The 5'10" Ceballo has a diverse style which he feels will help him excel to the top of the division.

"I can box, and I can punch, but what separates me from the others is that I am a very smart fighter and can adapt to any opponent. You will never see me fight the same way!"

Said Tim VanNewhouse of Split-Management, "Brian is an exceptional talent. He is a well-rounded exciting fighter who has won over two hundred amateur bouts and several national titles. With his accomplishments and maturity I think we will see him move quickly and successfully through the pro ranks."

Ceballo, whose parents are from the Dominican Republic, is trained by Robert Pagan.

Brian is signed to promoter, Tom Loeffler's 360 Promotions and makes pro debut on March 27 at The Avalon Theater in Hollywood, CA.

Fighting at the Floyd Mayweather Boxing Academy in Zhukovka, Russia, Potapov looked sharp while forcing Saltykov to stay on his stool after two rounds of pounding.

The 28-year-old Potapov holds a victory over former world title challenger Antonio Nieves and fought to a draw with Stephen Young, who is fighting for WBA Interim title this weekend.

"I am excited to get the win and look forward to challenging the best bantamweights in the world," said Potapov, post-fight. "Every experience is a lesson and I keep improving with each fight and training camp. Training in Detroit at the Kronk Boxing Gym with Javan SugarHill Steward has taken my game to the next level. I am grateful to my promoters Salita Promotions and PBL. I know this is going to be a big year for me."

Potapov's co-promoter, Dmitriy Salita, says his Russian bantamweight is a force at 118 lbs. "Nikolai is one of the best bantamweights in the world. His dedication, discipline in training and constant improvement make him a real threat in his exciting division."