Perth’s highly rated "Action" Jackson England is all set for his first regional title clash, as the Dragon Fire Boxing standout steps up to super featherweight to contest the WBC Asian Silver Championship on March 6 in Metro City, Perth in a co feature vs Filipino Jason Tinampay over 10 rounds, the winner becoming mandatory to challenge the Champion from China Li for his WBC Asia title.

England who recently resigned with Tony Toljs Dragon Fire Boxing on a long term deal, has had a solid start to his professional career, winning 11 of his opening 12 professional contests whilst becoming Australian Featherweight champion in the process. Jackson, who is trained at the Onyx Gym in Perth, opened up about resigning with Tolj and his upcoming title clash.

England said, "I'm absolutely delighted to have resigned with Tony Tolj and Dragon Fire Boxing. I am a featherweight, so I looked up to fighters like WBA Champion of the decade Chris "The Dragon" John who was one of the best featherweights in recent times. To be guided in my career by the same team that guided him is very special and I am very grateful.

"I am excited to be progressing in the way I am and I believe I can go all the way in this sport. I am still only young, so it is important to have the right people to guide you. I need to have that and I believe I do in Tony Tolj and Dragon Fire Boxing.

“I have the opportunity thanks to Tony to fight for a WBC title. We all grew up watching the likes of Floyd Mayweather winning WBC titles, so to start along that path is something I’m very grateful to be given the chance to go on.”

England returns on this year's first installment of the world-renowned Thunderdome series, that has been a mainstay of Australian boxing for decades in itself. England discussed his next outing and his plans for 2020.

He said, "Well I firstly need to keep listening to my manager Tony Tolj as he knows what's best for my career. He's guided the likes of the Moloney's, Billel Dib and Bruno Tarimo to major titles and I want to follow in their footsteps and I believe I can. They are all world rated, Ive just cracked the OPBF ratings and we are just getting started.

"I'm always improving, so I expect to put on a career-best performance at the Thunderdome show. I believe I can go all the way to the top in this sport and I have the opportunity to get into the WBC rankings in my next fight so that is a massive motivation for me in this fight.

"I wanted more titles in 2020 and I have that opportunity on March 6. I believe that I can progress up the world ratings titles in a way the likes of Bruno Tarimo and Billel Dib has done around my weight so I'd like to follow his path up the world route as I believe I'm destined for world titles eventually." 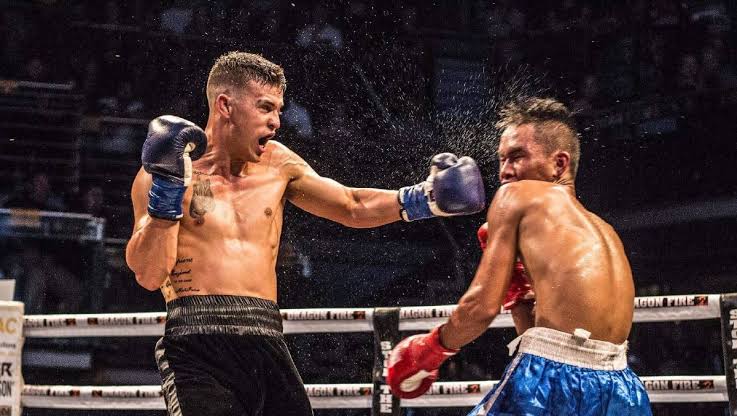 Ultimate Boxxer the all-action and entertainment professional boxing brand has today announced the eight Super Middleweight fighters set to compete on Ultimate Boxxer 7 - the seventh instalment of the series, which is taking place at Manchester’s Ice Arena on Friday April 3.

Ultimate Boxxer 7 will see some of Britain’s top Super Middleweights come together over the short format including Seb Eubank, Mark Jeffers and Diego Costa as they battle it out to win the Golden Robe.
The event will be broadcast live in the UK on BT Sport.

Tickets to Ultimate Boxxer 7 are on general sale now and can be purchased via Ticketmaster. Ticket prices start from £25.

All eyes will be on British fighter Seb Eubank, who will put it all on the line in one night. With a host of amateur boxing fights and MMA bouts to his name and with a surname that is set to turn heads amongst the boxing community, he has everything to prove as he looks to continue his unbeaten professional record in the ring. Those that train closely with him say that he definitely has the famous Eubank knockout power.

At just 22 years old, Manchester’s Mark Jeffers (11-0-0) will enter the night full of confidence following his Central Area title win in his last fight. With 11 wins from 11 fights, he goes into the tournament as one of the favourites with comparison’s already being made to Ricky Hatton- with many tipping him to go to the very top in the sport.

Unbeaten Idris Virgo comes into the tournament entering the peak of his career. Best known for his appearance in Love Island back in 2017, he will be determined to be taken seriously in the professional sport with his exciting style and personality.
Knockout artist Diego Costa who hails from Brazil via Manchester (7-0-0) joins the tournament with the best knockout ratio on the card. He is yet to taste defeat in his professional boxing career and his explosive nature is sure to excite fans as he looks to maintain his unbeaten record.

Next up is former Commonwealth Super Middleweight Champion Luke Blackledge who fights out of Darwen, Lancashire. Blackledge brings the most experience to the card and will be seeing this as his last chance to hit the big time.

Representing Scotland is the current Celtic champion, Tommy Philbin who returns to his favoured super middle weight and will be looking to return to winning ways when he steps back inside the ring after experiencing defeat for the first time in his last fight.

Other fighters set to compete in the tournament include Charlie Schofield (15-1-0) who fights out of Aston under Lyne and Scotland’s Tommy Philbin (13-1-0), both of whom are coming off losses and will be aiming to prove they have what it takes to win.
Finally, two Manchester based fighters complete the line-up. The established Charlie Schofield who holds a very impressive fight record of (15-1-0) and stands at 6ft 3 inches tall. And 22-year-old Ben Ridings, the youngest fighter in the tournament who will be looking to maintain his unbeaten record in front of his own fans.
Four quarterfinals of 3 x 3-minute rounds will be followed by two semi-finals before one grand finale to determine who will take home the title.

The draw for the quarter final pairings will be announced in the coming weeks.

Attention now turns to Ultimate Boxxer 7 which will see the Ultimate Boxxer series return to Manchester for the second time in six months. On that night Nick ‘Wild’ Webb was crowned the winner of Ultimate Boxxer 6 coming out on top on points against Mark Bennett in front of a 4,000-capacity crowd.

Benjamin Shalom, Promoter at Ultimate Boxxer said: “We’re excited to bring Ultimate Boxxer to a monster super middleweight division. The Ultimate Boxxer shows have been growing in popularity with huge ticket sales and now a sold-out pre-sale for this show.
“This time we wanted to bring a group of high-profile names to the card and it’s stacked with homegrown unbeaten British talent. There is no doubt this is our highest quality card to date.”

He added: “Ultimate Boxxer has already proved it’s a platform for boxers to go and compete at the very top of the sport. Shakan Pitters, Mikael Lawal and I hope Derrick Osaze will all be fighting for British titles. This year there will be even more opportunity for our winners’

With a fight card stacked with homegrown talent and six fighters going into tournament unbeaten, Ultimate Boxxer 7 promises to be an unforgettable night of high-octane explosive boxing action for boxing fans and casual fans tuning into the event.”

After a successful inaugural fight card on January 25th, Silver Bow will present ChampBox 2 on Saturday night, April 3rd at The Cure Insurance Arena in Trenton.

Headlining the card will be undefeated cruiserweight Mike Hilton.

Hilton, who headlined ChampBox 1 with a six-round unanimous decision over Baldimir Hernandez, will be back to thrill his hometown fans on April 3rd.

Hilton has a record of 10-0 with seven knockouts, and was a National Golden Gloves champion.

The card is a pro-am that will begin at 6 PM with the doors opening at 5 PM.