FRANK WARREN IS delighted to announce that outstanding amateur talent Dennis McCann has signed a promotional contract to turn professional with Queensberry Promotions.

The much sought after 18-year-old will be trained by Alan Smith out of the iBox Gym in Bromley and will be managed by MTK Global.

The Maidstone-based McCann will fulfil his dream of becoming a professional boxer following his departure from a highly successful stint in the amateur code and news on his debut date will follow shortly.

The nine-time national champion has won an array of further titles in amassing an amateur record of 50-4, with 16 wins coming via stoppage.

"I got picked for the European championships in September, but chose not to go. I had a GB assessment in December, but my dream has always been to become a professional boxer and I have watched pro boxing since I was six years old.

"I did the amateurs to be a professional and when I got this opportunity I took it with both hands," he added, also revealing that competing in the Olympics did not hold particular appeal.

"No, I could have made the Olympics but people have different goals in life and mine is to be a professional boxer under the lights and hopefully become a world champion one day."

To that end, McCann is happy to have aligned himself with a Hall of Fame promoter with a track record of steering young prospects towards realising their career goals.

"Frank is known in boxing for taking young fighters from day one and guiding them towards major titles and that was a big factor for me. Another one was my friend and trainer Alan Smith put me towards Frank and I trust the judgement of both of them."

Frank Warren is thrilled to welcome such a talented new charge to his team.

"Guiding young fighters like Dennis to world title contention and beyond is what I enjoy most in this business and I've got genuine hopes for Dennis, who did incredibly well as an amateur and has attracted a lot of interest within the professional ranks,” commented the promoter.

"He is in a great gym over in Bromley and I've got every confidence that Alan Smith - who does a terrific job with his fighters - is the right man to get the best out of him and bring about huge improvements as we go along.

"Dennis is a fantastic addition to our hugely talented crop of young fighters and I look forward to him beginning his journey with us and keeping him busy as he gathers the experience, he needs to make big strides in the professional game."

Featherweight star Stephen Tiffney is having to pinch himself ahead of the chance to beat Davey Oliver Joyce to the WBO European featherweight title in Dubai on April 5 – live on ESPN+ and iFL TV.

Tiffney (10-1) faces Joyce for the crown at Emirates Golf Club on a packed Round 10 Boxing Club card broadcast around the world and, having visited Dubai before, the Scot is delighted to be heading there on business this time.

Tiffney said: “I was on holiday in Dubai with my wife last year, so it’s crazy to think I’ll now be fighting there. It’s a great place and I’m looking forward to heading over there again.

“It’s a fantastic card and the first MTK Global show to be shown on ESPN+ in America, so I’m really excited. There are lots of talented stars on the bill, including some Olympians, so it’s one not to miss.

“This is a massive fight for me, and winning this bout and earning a title can open doors for some big fights. I’ve been training hard and I’m ready to get in the ring.

“I’ve been boxing for a lot of years now and have been travelling around from a young age when I was in the amateurs, so all of that experience will count when it comes to nights like this.

“The fight is getting closer and closer, and it’s going to be a brilliant event.”

Huge-hitting Mateo Tapia is preparing to serve up a showcase of his talent on Friday's historic 'The Fight - DXB Uncovered' at Dubai's Emirates Golf Club - live on ESPN+ and iFL TV.

The 20-year-old (9-0-KO5), who is Mexican born but now fights out of Australia, is attracting plenty of attention having already secured a State title via knockout and faces another significant step up in India's Gaganpreet Sharma (8-1-KO4).

Tapia said: "I’ve been working on being a bit smarter in the ring. Last time, I came out too tense for each round and I had to switch my game plan and box slick. I’ll be patient on the night in Dubai.

"It’s inspiring to be fighting in Dubai. I’ll try and put on a show for an overseas crowd and such a huge audience worldwide. To be travelling at such a young age doing what you love inspires me to be the best I can be.

"The MTK Global deal with Top Rank and ESPN+ is so big. There are a lot of Mexican boxing fans and that’s a hot spot. To be an MTK Global fighter on those shows, a lot of Mexican fans will be tuning in. It’ll be a great experience and good exposure for me.

"It’s just amazing to have this opportunity. Words can’t describe it – I’m so blown away."

UNBEATEN super-middleweight Zak Chelli is spending time in the gym and class room preparing for his next big boxing examination.

The Fulham fighter challenges for his first professional title at SSE Arena, Wembley on Saturday April 27 when he meets Slough’s Jimmy Smith (7-1) for the vacant Southern Area title.

Besides preparing for his title test, live on BT Sport, Chelli is completing a BA in Business Management and Marketing at University of Surrey.

He is adamant his boxing career isn’t suffering, explaining: “The course is flexible so I can get my training done. A lot of my lectures are online which helps.

“I am doing four hours boxing training every day and four hours studying. It has been like that since my SATs, GCSEs and A-levels.

“I don’t have social time at university. A lot of them do stuff at night but I am sleeping.”

One rival he isn’t losing sleep over is Ilford’s Umar Sadiq who he outpointed in a serious needle match last October.

Sadiq (4-1) returned to winning ways in early March and will be in action on Frank Warren’s stacked Wembley card.

He is itching for a return against his bitter rival, but Chelli scoffed: “Sadiq likes to mention my name a lot and speak rematches. He needs the rematch and I don’t.

“He has nothing to offer. If he has a title, I will go for it, but at the moment he has nothing.” 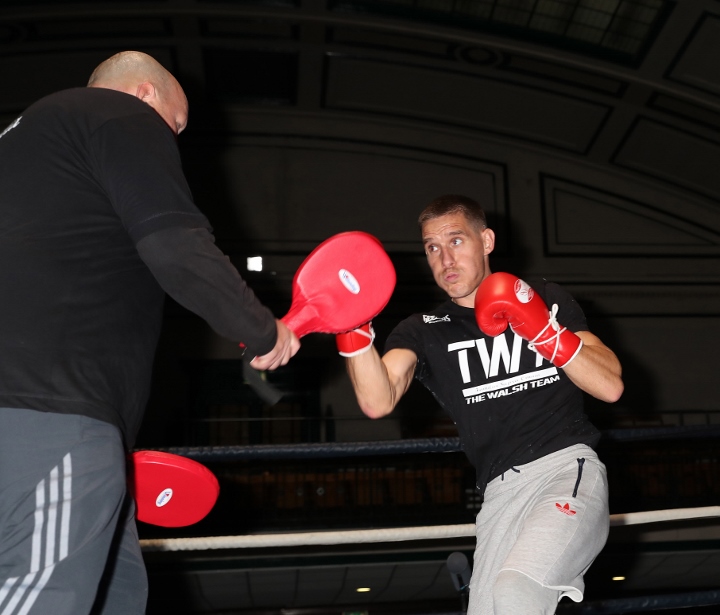 Liam Walsh will kick off his MTK Global career on a newly-announced #MTKFightNight in Brentwood on May 11 – live and exclusive on iFL TV.

After a jam-packed crowd at the Brentwood Centre saw Walsh’s new team-mates Michael McKinson and Mikey Sakyi defend titles in style on March 9, the Norfolk super-featherweight is back in the wake of his world title shot.

Former British, Commonwealth and European champion Walsh, who was last seen suffering the sole defeat of his career to American world champion Gervonta Davis, recently signed for MTK Global along with his brother Ryan.

Joining Walsh on another busy bill in Essex are a host of stars looking to steal the limelight.

The powerful super-lightweight Daniel Egbunike (4-0-KO3), who scored a second-round stoppage win at the venue last time out, is handed a Southern Area title eliminator against Jamie Carley.

There’s a swift return for former Team GB star Danny Dignum (10-0) as he looks to tee up a title shot, while another former world kickboxing king Jamie Whelan is set to make his eagerly-anticipated professional debut.

Zuhayr Al-Qahtani feels like he is on the verge of another huge homecoming as he prepares to compete on Friday’s historic ‘The Fight – DXB Uncovered’ at Dubai’s Emirates Golf Club – live on ESPN+ and iFL TV.

Unbeaten Al-Qahtani (5-0) has close ties with Dubai due to family he has in the region, and he's thrilled to have the chance to fight there on what is set to be a very special night.

Al-Qahtani said: "Part of my family are from Dubai, so for me to box there feels like another homecoming. I've got a large fan base in the Middle East and a lot of my supporters are coming to the fight which is really good.

"I'm very excited. I haven't boxed since I fought in Saudi Arabia in September so I'm really eager to get back in the ring. This feels like a dream come true and I'm ready to go and make an impact.

"The entire experience of fighting in Saudi Arabia will help me massively for this fight. I was a bit nervous in Saudi Arabia because it was a big card in my home country, but now I've dealt with that, it doesn't matter where or who I fight now.

"I travel to Dubai quite often so it's great to be back out there where it feels like home. As soon as I heard about this card I was eager to get on the bill, so I can't wait to compete."