World-ranked super-featherweight Jono Carroll has pulled out of his clash with Marco McCullough on Saturday after sustaining a cut during training.

The unbeaten 26-year-old (15-0-KO2) had been due to defend his IBF title on the undercard of Carl Frampton v Nonito Donaire in Belfast.

McCullough (18-4-KO11) said: "It's obviously disappointing to have prepared for this long and then be unable to fight on the night but I'll be back.

"Hopefully Jono can heal quickly and we can move the fight rather than cancel it altogether. I still want to face him so hopefully it can happen at the first available opportunity."

Carroll was last seen in November 2017 when he produced an eye-catching early stoppage of Humberto de Santiago - also in Belfast.

McCullough fought on the same card at The SSE Arena that night; halting Josh Baillie in the third round. 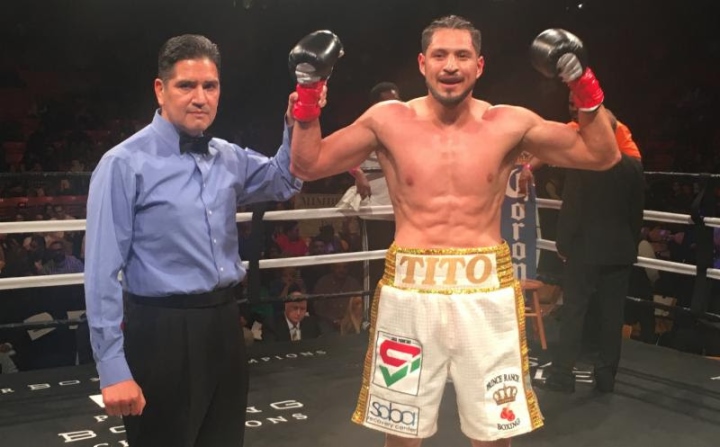 In his last fight on the undercard of Victor Ortiz vs. Devon Alexander, Velazco scored an impressive 4th-round knockout over, Thomas Williams Jr. (20-4, 14KOs), who was ranked top ten in the world one time. Velazco's powerful straight left to the head of Williams ended the bout, and the punch was the knockout of the night. For this fight, Velazco, who is currently ranked WBC #17 at light heavyweight, will go down to super middleweight against Caceres.

"Although my last fight was at light-heavyweight, I'll be campaigning at super-middleweight when I face Caceres," said Velazco, who is managed by Greg Hannley of Prince Ranch Boxing. "I'm very thankful to Sugar Promotions and the WBC for letting me fight for the vacant Silver super-middleweight title. Caceres is a big puncher, so I'm taking this fight very seriously. But make no mistake about it, I'm going for the knockout. I'm very confident that in the very near future, I'll be knocking on the doorstep of a world championship bout."

The winner of Velazco vs. Caceres, will face the winner of Dmitrii Chudinov vs. Azizbek Abdugofurov. That winner, will be one step closer to fighting for the WBC super-middleweight title against David Benavidez.

Damien Vazquez, age 20, will be looking to make a statement against Luis Golindano.
Against Miguel Lizardo in his last fight, Vazquez scored a 5th round TKO. Damien, who is the younger brother of former two-time world champion Israel Vazquez, has been training in Aguascalientes for the last two weeks.

"I wanted to host camp in Aguascalientes since I'm going to be promoting a lot of fights out here," said Damien Vazquez, whose father Oscar Vazquez runs his promotional company, Sugar Promotions. "My goal is to win impressively against Golindano and let everyone in my division know that I'm coming."

"Feria de Campeones", will take place at the world-famous Plaza de Toros San Marcos in Aguascalientes, MX. Stadium View Network (SVN) will distribute the entire fight card to its network in the U.S., which include Racetracks, Casinos, and bars. In addition, Sugar Promotions will be live streaming the event over the internet on Facebook Live, and Nextchannel.tv.

Slammin’ Sandy Row slaughterman Lewis Crocker intends to extend the explosive start to his professional career at the SSE Arena in his home city on Saturday evening.

Thus far, the 21 year old has blitzed all four welterweight adversaries early, with only Bulgaria’s seasoned Radaslav Mitev making it through the opening session.

‘To date, I’ve only fought five rounds as a pro but I really enjoy knocking people out,’ quips the mild mannered ‘Croc’ whose bite is certainly bigger than his bark.

‘At this stage, I don’t think the early knockouts are inhibiting my development. I’ve had plenty of rounds of sparring in the gym. The objective is to win and the kayos are a big bonus. If you could get out of work early, wouldn’t you?!

‘If you’d told me a year ago that I’d have had four wins, and four stoppages plus all the publicity I’ve generated, I’d certainly not have complained.

‘It’s in my head to fight for the big titles eventually but I leave all that to my management. Right now, I’m so happy, really enjoying my boxing. Life’s great. I just want to keep improving in camp; building up my stamina, getting physically stronger, faster, more tactically aware. Gradually, I want to get more rounds, be involved in longer, harder fights.’

And the young Ulsterman claims he learnt to punch before he learnt the alphabet.

‘My earliest memory of boxing was watching Rocky IV when I was just four years old and then training frantically afterwards. My sister Alanna, who’s 11 years older, was a boxer (two-time Commonwealth Games rep)so it was always around me,’ recalls the lean and lithe 5ft 11in Crocker who is managed by MTK and coached by ex pro Ray Ginley.

‘Names like Wayne McCullough were bandied around when I was a kid and, at school, I’d spend a lot of time watching Frampton fights on the computer. Carl was a real inspiration to me.

‘I’d always tell the careers people that when I left school I was going to be a boxer. Nothing else remotely interested me. I’ve been travelling around the world with the boxing since I went over to Russia with an Irish squad when I was only 13.’

Born and raised in the infamous Sandy Row district of south Belfast, ‘The Croc’ was no stranger to violence and conflict throughout his formative years. Boxing, he acknowledges, proved instrumental in helping him to integrate.

‘Sandy Row got a lot of bad publicity during ‘The Troubles’ and there were certainly ‘higher class’ suburbs in the city but for me it was ‘dead on’. It really made me appreciate what I had and it toughened me up. If I’d been raised elsewhere, I doubted I’d have the balls that I do!’ he claims.

‘Though I initially boxed for a protestant club (Cairn Lodge), I went to a cross community school attended by both Catholics and Protestants, then moved to the Holy Trinity club in the heart of the nationalist community. Nobody there cared what your religion was. The coaches Harry and Mickey Hawkins treated me so well, did so much for me.’

The once conflicting communities will come together in harmony this weekend to pay homage to the city’s favourite fighting son as Carl ‘The Jackal’ Frampton bumps beaks with seven-time world champion Nonito Donaire for the interim WBO Featherweight strap.

Before the inevitable pyrotechnics begin, expect crunch puncher Crocker to detonate a few fireworks of his own in a six round undercard slot.

‘I’m buzzing for Saturday. This is the longest and best camp I’ve ever enjoyed,’ says left hooker Lewis who once iced a Spanish teenager in just 13 seconds including the full ten count!

‘The people of Belfast love their fighting. I recall watching a few of ‘Big Rogie’s’ (ex Commonwealth heavyweight champion Martin Rogan) fights at the Odyssey Arena and I was in The Ulster Hall the night Martin Lindsey won the British title. There was some atmosphere.’

‘They’ll be respectful to Nonito – a great fighter – but they’ll really get behind Carl. One day I intend to headline there myself. That’s the dream. Stepping stones.

‘It’s great to be a small part of the occasion and I’m desperate to put on another explosive performance for them. Hopefully it’ll be five wins, five kayos.’

WBO Bantamweight Champion of the World Zolani Tete also features as he makes the second defence of his title against former three-time World Champion Omar Andres Narvaez after his Word recording-breaking KO win at the SSE Arena in November.