Bauza of North Bergen, New Jersey by way of San Juan, Puerto Rico has an unblemished professional record of 14-0 with five knockouts.

"I have followed John Bauza since the amateurs, and I always have been impressed. He won the best fighter award at the best tournament I ever went to beating out the likes of Ryan Garcia, Tiger Johnson, Marc Castro, Otha Jones, Keyshawn Davis and so many more top fighters. I believe that he has the opportunity to be as big a star in New York as he already is in Puerto Rico, and he is on the path to a world title," said David McWater of Split-T Management.

"I am excited to sign with Split-T Management because they have a lot of great fighters, and I see what they have done with them in terms of advancing their careers.  I was looking for somebody to bring me to another level, and Split-T Management is just the company that will do that for me," said Bauza.

"I want to keep training hard.  Now that I have good management, I can see that my dreams can come true, and that is to be a world champion." 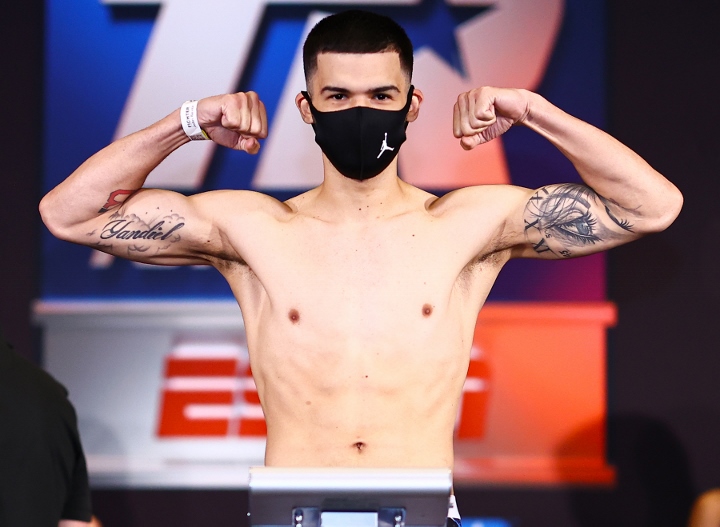 The 22 year-old began boxing at the age of nine went he walked into a gym and loved the sport immediately.  "My dad did not like it at first, but I was good at it and stuck with it," Said Bauza.

Bauza turned professional on April 23, 2016 with a 1st round stoppage over over LeRoy Padilla in Caguas, Puerto Rico.

Bauza, who was born in San Juan, Puerto Rico, and has continuously stepped up his competition.  He is coming off a eight-round unanimous decision over Larry Fryers (11-2) on June 30th in Las Vegas.

Bauza lists going to the beach and watching documentaries on boxing as his hobbies.

Bauza is promoted by Top Rank.

The pair will clash for the International Boxing Federation (IBF) Inter-Continental Flyweight Title live on Eurosports, with the winner catapulted into the IBF world rankings.

Unbeaten Frank, 13-0 (3), will need to be on top of his game against his more experienced opponent. The South American has lost just four times in 23 fights, and knocked out 8 adversaries.

No stranger to these shores, Guarneros, 30, was on the front foot all night against highly-rated Sunny Edwards in September last year and, despite losing widely over 10 rounds, is adamant he won’t return to his homeland empty-handed against Frank.

“I am very motivated about this big opportunity and this time I will perform better than in my previous fight in the UK,” explained Hugo.

“I know Tommy is a very good boxer but not much else because I let my coach take care of analysing him and designing the strategy for the fight.

“This will be a very exciting fight which people will love. It will be very tough but I know I’ll win because I’m more experienced now. I had a 10 round fight recently, which I won, so I’m very confident for December 11.

“To win this title will be the biggest achievement of my career up to date and after that, I’ll be looking at getting a World Title shot.”

Fighting out of Kingscliff, New South Wales, Payne made an impressive professional debut last year with a second round knockout in his native NSW. Soon to make his second professional outing in Queensland on December 18th, Payne chose the period to enhance his backroom staff with a man continuously building world champions in Tony Tolj.

The experienced boxing manger adds Payne to his talented and ever-growing stable which boasts the likes of Andrew and Jason Moloney having also worked with the likes of Chris John in the past.

Payne achieved monumental amateur success in his native Australia winning; The Australian National Championships 2015, Queensland & New South Wales State titles in 2016, Interstate title 2017 and the Clarence Valley Title in 2018 making him one of the hottest prospects in Australia.

Campaigning at Super Lightweight, Ty Payne has great enthusiasm about his career with the following comment “I have had over 100 fights as an amateur and I have been boxing since I was 12 years old. Since then, it has been my dream to become a professional and win a world title. My work ethic is second to none and with the right management and people around me, I have no doubt I can go all the way.”

Tony Tolj commentated further on his newest acquisition “He’s a good kid with bags of potential and I’m delighted to welcome to our team. We can achieve as much as he wants in the sport, he’s got a great heart and character, as well as being a talented fighter.”

Ty Payne’s inspirations come in the form of Roy Jones Jr, Canelo Alvarez and new stable-mates Andrew & Jason Moloney looking to emulate these champions to go on and claim his own silverware in the future.

Peter Kahn’s Fight Game Advisors has entered into an exclusive managerial contract with female prospect Stephanie Chavez, (3-1-0), of Orange, CA, it was announced today. The 19-year-old Chavez, competing in the 115lb. division made her professional debut earlier this year and looks ahead to a very busy future following the signing.

“Working with Peter and his Team provides me with exactly the structure needed for success,” said the 5’4” Chavez. “Along with my trainer EJ Llamido they’ll sort out my fights and my training schedule and my job will be to continue to learn and get better with each camp and fight.”

Said Peter Kahn, “I am looking forward to working with Stephanie. She is a very intelligent athlete in that she has shown her ability to dissect each training technique through repetition and utilize it for her own unique style.”

“Stephanie is a work in progress, extremely coachable and has a knack to adapt. At just 19 years old, although having a limited amateur career, what she lacks in experience she has in potential. Successful amateur careers can be an illusion. Stephanie's a fighter and will continue to improve.”

Born in Chicago, IL before moving to Southern California at a young age, Chavez was a standout volleyball player at Villa Park High School near her hometown. She took up boxing in the summer of 2018 and was immediately drawn to it.

“I love boxing and I’m very committed to it. It’s a very challenging sport and takes great discipline which I appreciate.”

Chavez competed in the 2021 U.S. Olympic Trials earlier this year and has sparred frequently with world champion Seniesa Estrada.

“Competing at the Trials at such a high level really gave me a wealth of confidence. Sparring with Seniesa has taught me so much, she’s extremely talented and working with her has made me a much better fighter.”

Stated trainer EJ Llamido, “At this stage of Stephanie's career, time is on her side, we are working hard to make her a complete fighter. Her physical, mental and spiritual are in sync. We’re putting in hours on top of hours developing her speed, power and timing. That's what it will take for her to achieve her ultimate goal. I see her becoming a world champion in the future.”