OUTSTANDING AMATEUR AND seven-time national champion Henry Turner is turning professional and will be promoted and managed by Frank Warren and Queensberry Promotions.

Turner's amateur tenure spanned 60 fights, of which he lost only four. He describes himself as a southpaw counter-puncher and he intends to campaign professionally at super lightweight, training out of the iBox Gym in Bromley.

"I am just over the moon to get this signed after all my years of being amateur," said Turner, an amateur teammate of Dennis McCann. "It has all finally fallen into place for me and I couldn't ask to have a better team around me, with having Alan Smith at the iBox Gym along with Frank.

"I am thrilled with how it has worked out and hopefully I will get to make my professional debut in November. It is brilliant for me that Frank will manage me too and not many fighters get to say that.

"I am a southpaw counter-puncher off the back foot and I think that appeals to my trainer Al, who was not looking to take on any more boys as he is so busy. I went for a trial and after a couple of minutes on the pads he said he would be delighted to take me on.

"Hopefully it will be a good journey with Alan and Frank for me."

Promoter Warren said, with a nudge towards one of British boxing's most favourite sons, that Turner would be named after another famous Henry.

"I am delighted with this signing and he is a top little fighter with an exceptional amateur pedigree," said the Hall of Fame promoter. "We are going to call him 'Our 'Enry' and I believe he is a cracking fighter and another star in the making that we have got in our stable."

The promising 25-year-old has raced to an impressive record of 12-0, 8 KOs and earns his place in the competition among big names such as Ohara Davies, Zhankosh Turarov, Tyrone McKenna, Mohamed Mimoune, Akeem Ennis Brown and Anthony Yigit.

With a life-changing two-year, five-fight contract with a top promoter at stake, Surtees is delighted to have been handed his big chance.

Surtees said: “I can’t wait to get stuck into this tournament. We’ve entered it because we think I’m being avoided and I want to prove a point.

“I’m going to win it. There are some good people in there and there’s no hiding – we all meet. The fans know what they can expect from me. Hard-hitting, sharp, skillful boxing and I’m the full package really.

“I know I’m going in as a massive underdog but I don’t believe there’s anyone on my level. I’m going in believing I can win it and my coach believes I can too. That’ll do me.”

MTK Global Professional Development Coordinator Jamie Conlan said: “We’ve got some proven operators already in the tournament and the amount of applicants we’ve had from all over the world is staggering but we wanted to give a young, unbeaten British fighter a chance to make a name for himself and in Darren, we’ve got the most dangerous one out there.”

MTK Global promoter Lee Eaton said: “This is a great opportunity for one of the most exciting fighters in the UK. Everyone who has seen him fight knows Darren has great potential and will be a fan favourite with his power.

“We’re just one step away from completing the line-up at 140lb right now and it already looks an absolute cracker.”

The final contestant in the 140lb tournament will be announced in due course.

The featherweights kick things off at York Hall on October 4 with several more light-heavyweights due to join some more big names in the third and final division of the competition’s first season.

MTK Global is delighted to confirm the pioneering #GoldenContract tournament will be broadcast by TV giants Sky Sports in association with Matchroom Boxing.

The competition that has the entire boxing world talking kicks off October 4, when the quarter-finals of the featherweight division take place at London’s famous York Hall.

Matchroom Boxing promoter Eddie Hearn said: “It’s a great format – quarter-finals, semi-finals and the final. The winner comes out as a bit of a superstar and also goes straight into a major contract with a promoter as well.

“Get them in there, make the draw, no-one can duck anyone, no seeding. Go and beat them and run all the way to the final.”

Sky Sports Head of Boxing Adam Smith said: “The Golden Contract is an exciting concept which has been created by MTK Global and we’re really looking forward to showcasing the inaugural tournament live on Sky Sports.

“There are some familiar faces in the different weight classes who always bring drama, high-octane fights and explosive knockouts, so you should expect an enthralling evening of action when the competition begins on October 4. We really can not wait for it.

“The Golden Contract is a welcome addition to our stacked Autumn as we bring you a bumper schedule of live boxing on Sky Sports.”

MTK Global President Bob Yalen said: “We are hugely excited to have reached this deal with Eddie, Adam and their respective teams at Matchroom and Sky Sports. We look forward to working with them closely to bring this outstanding concept to the public.

“When three powerhouses unite to put their collective expertise and resources into making something great, you know they’re going to succeed; so if they weren’t already, everyone should be very, very excited about the Golden Contract Tournament and supporting their favourite boxers.”

MTK Global Professional Development Coordinator Jamie Conlan said: “This is fantastic news for all parties concerned and a proud day for MTK Global.

“We’re delighted to be working with two of the biggest companies in the game to bring the Golden Contract Tournament to the masses. We believe these events are going to be a huge hit with everyone who gets to see them both at the events themselves and on TV.”

Further news of fights and fighters will be forthcoming with the hotly-anticipated draws taking place at the start of each fight week. 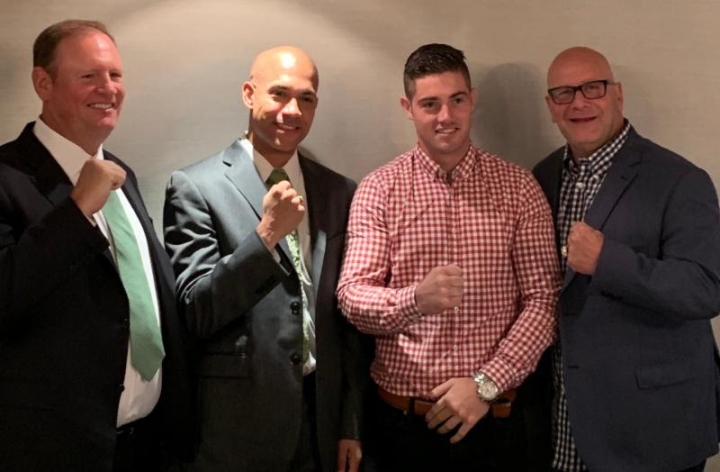 Ward also earned the silver medal at the 2017 World Amateur Championships in Hamburg, Germany. Competing for the British Lionhearts in the World Series of Boxing, Ward compiled a record of 8-1 with a 2018 ranking ahead of Cuba's two-time Olympic champion Julio La Cruz. Having his first fight at 11 years old, Ward ended his amateur career with a record of 290-15.

"I'm really looking forward to making my pro debut at Madison Square Garden, which is a great venue to introduce myself to the boxing world as I enter the professional ranks," said Ward. "It's going to be a special night that I will never forget. I'd like to thank my team, DiBella Entertainment, Murphys Boxing and Times Square Boxing Co., for the opportunity and I am excited to put on a great performance."

"Ken Casey and I are both thrilled that super prospect Joe Ward is debuting on the GGG-Derevyanchenko card," said Lou DiBella, President of DiBella Entertainment. "We expect to see a lot of support from New York's Irish community and believe it'll be one of many New York City fights for Joe as he begins his rise up the ranks of boxing's elite."

"Joe is a world-class prospect and a future star, and we are incredibly excited that he can begin his journey as a professional at such a historic and venerated venue," said Adam Glenn, CEO of Times Square Boxing Co. "This is an amazing way to start what we know will be a tremendous boxing career."

"Fighters spend their whole lives dreaming of fighting at Madison Square Garden," stated Joe Winters, Chairman of Times Square Boxing Co. "Joe Ward's hard work, dedication and accomplishments allow him to start his career there. We believe that this is going to be the first of many special nights for Joe."

"I would like to thank my team at KO Night Boxing for working to get this opportunity against Joe Ward," said Delgado. "I've been waiting for this call my whole life. I'm here to do my job and that's to make the judges' job easy."

"I am truly excited for the world to get a look at Marco Delgado," said John Anderson, of KO Night Boxing. "I think Lou DiBella will be in for a big surprise. I have all the respect in the world for Lou, but in this fight, I feel Marco is way too rugged for Joe Ward and it will show as the fight progresses."