Future Hall of Famer Antonio "The Magic Man" Tarver (31-6-1, 1 NC, 22 KOs) has just about done it all as a boxer having been an Olympic medal winner and world champion as an amateur, along with capturing five major light heavyweight world titles as a professional, as well as a pair of The Ring magazine's top honors, and four other world championships in two different divisions.

"I credit USA Boxing for giving me structure for the first time in my life," Tarver explained. "Everything was scheduled; curfew, eating, training, sleep....everything! I then understood that I had to be accountable for everything I did. I had talent, but I wasn't structured, and that was bigger than me. I had to adjust to authority. My determination took off, giving me support I never had before. I went on to make speaking engagements and get sponsors. I broke barriers. I've been the best at every level that I fought at in the world."

Tarver was a highly decorated amateur who had an amazing 158-12 record. He is the only boxer to capture gold medals at World Amateur Championships, U.S. National Championships and Pan-American Games in the same year (1995). The Orlando, Florida-born southpaw won a bronze medal at the 1996 Olympics in Atlanta, losing in the quarterfinals to future world champion Vassiliy Jirov, who Tarver had defeated in the semifinals of the 1995 World Amateur Championships. Tarver also won top honors at the 1994 National Golden Gloves Tournament and 1995 World Championships Challenge.

"I went on a winning roll in 1995 and went into the Olympics in rare form," Tarver said. "And that's why I was favored to win a gold medal. I was hitting him (Jirov), the same guy I'd beaten in the World Championships, but no points were registering for me. I had a good second round, but I was down three points, so I threw my game plan away in the third round. I felt I had to do more and got away from my style: counter punching, not getting hit, and being patient. I thought I had won and so did a lot of people. I made up for that, though, with a gold-medal professional career.

"I had been faced with a decision about going pro after I was beaten in the '92 Olympic Trials. I decided to stay in the amateurs, despite not having any guarantees about making the 1996 U.S. Olympic Team. I sacrificed four years of my pro career, which is why I turned pro at a relatively late age (27). I was determined when I found out the 1996 Olympics were in Atlanta. I think I made the right decision and I have no regrets.

"I had always dreamed of going to the Olympics. I saw Roy Jones, Jr - we first fought each other at 13 - get robbed of gold. I was watching that on television, jumped up, and knew where I was heading: The Olympics! We both suffered horrible decisions in the Olympics and I knew then that our careers would be parallel.

Tarver made his pro debut February 18, 1997 in Philadelphia, stopping Joaquin Garcia (4-0) in the second round.

"I was an Olympic bronze medal winner but when I first turned pro," Tarver added, "I didn't have a promoter or manager. Nobody was willing to take a chance on me until I was 4-0, when I signed by first contract with Russell Peltz. I felt nobody could beat me."

Nobody was able to beat Tarver, at least until his 17th pro fight, when Eric Harding defeated Tarver by way of a 12-round unanimous decision.

Two years later, Tarver embarked on a 12-fight murderer's row stretch during the next seven years, arguably establishing him as the No. 1 pound-for-pound fighter in the world. It all started with a successful rematch with Harding (21-1-1) in Indianapolis, when Tarver dropped Harding in the fourth round, plus twice more in the fifth, on his way to a fifth-round technical knockout to avenge his lone pro loss to that date.

Next up for Tarver was a showdown with 44-3 Montell Griffin for the WBC and IBF 175-pound division titles, which were vacated by Roy Jones Jr., April 26, 2003 at Foxwoods Resort Casino in Mashantucket, Connecticut. In his first world title shot as a pro, Tarver pitched a complete shutout, decking Griffin in the first and last rounds to shut out his opponent by scores of 120-103 from all three judges.

Seven months later, however, Tarver lost a controversial 12-round majority decision and his WBC crown (he was stripped of his IBF belt) to WBA Super and IBO champion Jones in Las Vegas. The following May at the venue, Mandalay Bay in Las Vegas, though, Tarver became the first to knockout Jones, putting him to sleep in the second round.

Tarver then became a mainstream celebrity, appearing on late-night shows and covers of The Ring magazine and KO Magazine, and co-hosting an ESPN Friday Night Fights telecast.

"I was robbed in my first fight with Roy," Tarver insisted. "They called my knockout of Roy the greatest upset in light heavyweight history. Why didn't they see me coming? I had beaten everybody ranked ahead of me. Roy was the pound-4-pound king, but he knew. I may not be the fastest, the quickest, or the strongest, but I doubt that there's ever been a pro fighter to enter the ring with a higher IQ than me. Even at my age, I still feel that way today."

The WBC stripped Tarver of his title in 2004 for fighting IBF champion Glen Johnson (41-9-2) instead of the WBC mandatory challenger. Johnson, ironically, was stripped of his IBF title for the same reason right before his fight in Los Angeles with Tarver. Tarver and Johnson fought for The Ring and IBO titles and Johnson won a 12-round split decision.

Tarver lost a 12-round decision June 10, 2006 in Atlantic City to Bernard Hopkins for the IBO championship, which was soon vacated and recaptured by Tarver with a 12-round majority decision over Elvir Muriqi (34-3).

Tarver traveled to Australia in 2011 to challenge IBO cruiserweight champion and local hero Danny Green, who retired after nine rounds, as Tarver added another title belt to his display case.

In December of 2013 in Temecula, California, Tarver knocked out Jonathon Banks (29-2-1) in the seventh round, and Tarver's last fight was a 12-round split decision draw with former world champion Steve Cunningham (28-7) in Newark, New Jersey.

In 2006, Tarver starred as Mason "The Line" Dixon, the heavyweight champion in the film, Rocky Balboa.

Tarver, as he marches towards his planned history-making performance by becoming the oldest heavyweight world champion of all-time, also has served as a color commentator in boxing for Spike TV and Showtime.

Today, at the age of 49, Tarver is still technically active, and he also trains his son and undefeated middleweight prospect, Antonio Tarver, Jr. (5-0 (4 KOs), where they live in Tampa, Florida.

"I was older than the rest of the boxers on the U.S. Olympic Team and the U.S. National Team," Tarver remarked. "What a team! Guys like Diego Corrales and Zab Judah didn't make that Olympic Team. I gave Floyd Mayweather, Jr. his first moniker, 'Pretty Boy Floyd', until he changed it years later to 'Money'. We had a bond on that Olympic team with Floyd, Fernando Vargas, David Reid, Zarim Raheem and the others."

Although at the age of 49 he is still an active fighter, Tarver occassionally does some color commentating and he trains pro and amateur boxers at a gym in Tampa, Florida. "I'm not retired as a fighter," Tarver commented. "I started a program, 'Train with The Champ', and it includes room rent and training. I like to say it's an AirB&B for boxing. I train my son (5-0 middleweight Antonio Tarver, Jr. there. I learned a lot from my early days, training in Orlando with my coach, Lou Harris, and I reunited with Jimmy Williams, who is 90 now, training my son together in Tampa.

Tarver also is an advocate of the relatively new "USA Boxing Alumni Association," which was created to champion a lifelong, mutually beneficial relations between USA Boxing and its alumni, --boxers, officials, coaches and boxing fans -- the Alumni Association connects generations of champions, inspiring and giving back to USA Boxing's future boxing champions, in and out of the ring.

Everything that goes around, comes around, in USA Boxing. Just ask future Hall of Fame candidate Antonio Tarver. 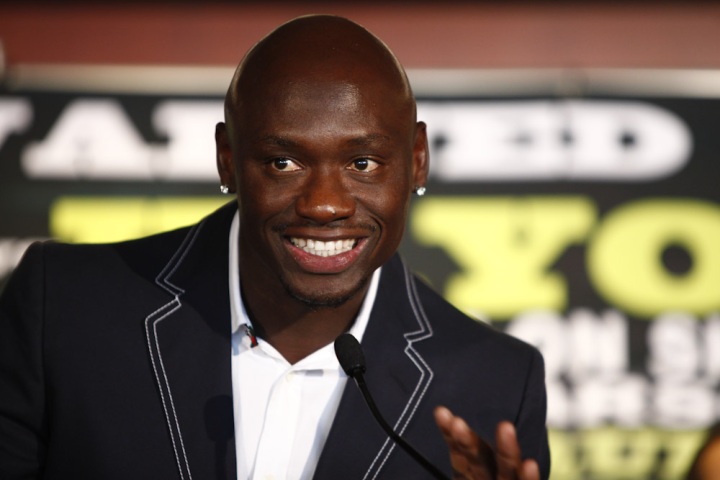 Rosalinda Rodriguez (6-0, 2 KOs) captured the WIBA Bantamweight title with an 8th round stoppage over Ivana Coleman (1-10)

Santario Martin (4-3) won a six-round unanimous decision over Curtis  Waller (1-6-1) in a light heavyweight bout.  All three judges scored it 59-55

Alexander Dedovets (5-1-2) won a six-round unanimous decision over  over Alejandro Esquilin Santiago (0-3) in a heavyweight bout.  All three judges scored it 60-54

Pittsburgh, Pennsylvania.... "Right idea, wrong fight", those were the words of Dallas welterweight, Jonathan Steele who gained his 8th victory as a professional on WFC 87 at Meadows Racetrack and Casino. Steele, who entered the ring on Saturday with 9 fights under his belt squared off against the seasoned veteran, Steven Upsher, 25-5-1(6kos), who was attempting a comeback bid in front of his hometown crowd.

Steele dominated the fight from the opening bell, banging Upsher to the body, which ultimately led to the 31 fight veteran to quit in the 5th round of their scheduled 8 round bout.

"We took the fight on a two week notice. My initial fight on May 18th was canceled, and Upsher's opponent pulled out at the last minute. I didn't care what his record was, or who he fought. I knew he had never faced a guy like me before." Steele added.

Future hall of Famer? With the exception of an older Roy who has he beaten?

Solid fighter but caught too many times on PEDS. Was definitely on something the night he beat Green, but avenged most his defeats. Hopkins absolutely schooled the daylights out of him though that was a great fight. If he wants…

As a fighter he was pretty good not great but pretty good but as a person he's at the bottom of the barrel ...if you're going to write an article about the guy state ALL the facts... he can't even…

Tarver is probably still fighting because he needs the money. A few years back he was in the headlines because he was trying to get his child support payments reduced to a more reasonable level.

Reading through...wow I never knew Tarver had such an impressive amateur record. No wonder he was so successful as a pro.