Fighting out of Houston, Texas, under the guidance of trainer Rudy Silva and manager Niko Tsigaras, 22-year-old Mexican American Guerrero (12-0, 9 KOs) is a crowd-pleasing power puncher with an aggressive, pressuring style and a strong amateur pedigree.

Guerrero started boxing at age 10 at the Irving PAL and went on to win two junior national titles while going approximately 90-10. Along the way, he faced such current luminaries as WBC Lightweight Champion Devin Haney, WBC Silver Lightweight Champion Ryan Garcia and 2019 The Ring Magazine “Prospect of the Year” Virgil Ortiz, against whom he went 2-2 in a four-fight series.

Last seen in action on March 13, breaking down and winning a nationally televised decision over then 12-1 Jose Angulo on SHOBOX: The New Generation, Guerrero says the new pact moves him a step closer to his ultimate goal.

“I am excited to continue my boxing career with a team that others would call an “all star” team,” said Guerrero. “I am confident and blessed that, with this team, my dreams of becoming a world champion are now possible.”

Dunkin, the 2017 BWAA Manager of the Year, guided the careers of 34 world champions before starting his NOW Boxing Promotions, says he’s excited to be working with Salita on this young prospect. “By teaming with Dmitriy, I feel Cameron Dunkin/D & D Boxing Inc., and Dmitriy Salita/Salita Promotions will afford Alejandro many opportunities to show his talent.”

Salita, the former fighter turned emerging promotional presence in boxing, says Guerrero is a welcome addition to his growing stable of prospects and champions.

“I am excited to promote one of the best lightweight prospects in the world in Alejandro ‘Porkchop’ Guerrero,” said Salita. “At only 22 years old, he has already shown his world-class potential. I am grateful to be teaming up with Cameron Dunkin who has demonstrated his superb eye for blue-chip talent over many years in the sport.” 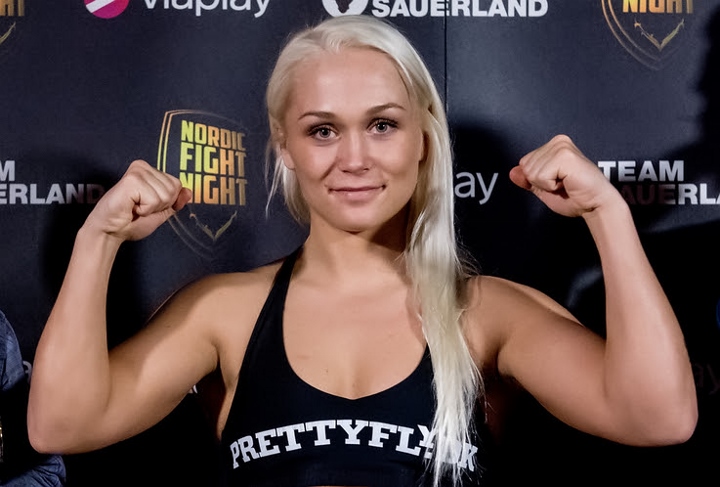 WBO Super Bantamweight World Champion Dina Thorslund (14-0, 6 KOs) is planning on a knockout victory over Serbia’s Nina Radovanovic (14-3, 3 KOs) when they meet on September 26th at the Struer Energi Park in Struer, Denmark.

Thorslund, who is also trained as a physiotherapist and personal trainer, has implemented her expertise to increase her punching power as she plans on claiming the seventh knockout victory of her professional career.

“If I see the opportunity, I will take the chance to end the fight before the last bell,” said Thorslund. “Radovanovic has been on the deck before after being hit downstairs. I’m a good body puncher so if I hit her well, I expect her to go down!

“I think this training camp has given me more power,” continued the unbeaten 26-year-old. “I’ve introduced CrossFit into my training regime and by working on different movements I have improved my stability and balance. And with greater stability you can hit better, so I feel like I have really benefited from these changes.”

Thorslund, who will defend her WBO Super Bantamweight World title for the third time on September 26th, last fought in June 2019 when she comfortably outpointed mandatory challenger April Adams. After an extended period outside the ring, Thorslund is looking forward to stepping back through the ropes.

“I’m so excited to be fighting again! I can’t wait to get into the ring again and hear the fans in Struer. It’s been a long wait but I’ve kept myself ready and I’m in super shape. My opponent comes to fight and will give everything to become a World Champion, but I don’t think she can last 10 rounds with me.”

“I told myself that I didn’t want the fight to go the distance because I know how important it was for me to look impressive in my PBC debut,” said Victor Pasillas, who was born and raised in East Los Angeles. “When you fight on national television, I feel you must show out and go for the knockout. With this being my televised debut as well, that’s exactly what I did, keeping my knockout steak alive. I made a concerted effort to let my hands go and not be boring. Fans can expect me to fight this style every time I step in the ring.”

“It was an incredible feeling to see Victor get the exposure with PBC and FOX as he deserves everything that is coming his way,” said Greg Hannley, CEO of Prince Ranch Boxing, who manages Pasillas. “He has the talent to become a multiple division world champion, and knowing how hard he works, I can see him in some very big fights right away. Everyone is saying Victor is a star in the making and I agree. We are exploring options for his next opponent and I know it’s going to be big.”

With the bantamweight and featherweight divisions stacked with talent, many big fights can be made with Pasillas. His performance against Encarnacion showed he will be a problem for any champion or contender fighting in those respected divisions. Pasillas wants all the big names.

“At age twenty-eight, I feel I’m in the prime of my career, ready to fight any of the champions or contenders at bantamweight or featherweight, Pasillas continued. “Both of those divisions are loaded with entertaining fights, and I’m ready to jump in headfirst and fight all of them. I know the fans want to see me challenge those guys so let’s see who they put in front of me next. I’m hoping it’s a big name. I’m so grateful to the folks at PBC and FOX, as well as my core team, for believing in me. I’m ready to take over.”

I just witness the most perfect combination of everything a trainer wants in a fighter. He worked the head and body, counter punched awesome, slip punches and made his opponent pay, was smartly fighting aggressive and had killer instinct when…