Abner Mares, the four-time world boxing champion in three divisions, was invited by the Los Angele Chargers, In conjunction with the NFL's celebration of Hispanic Heritage Month, to be part of their 'Feel the Orgullo" activites at yesterday's game against the Denver Broncos. Mares was the honorary cannon firer for the Chargers, kicking off the game against the Broncos in Los Angeles at Rokit Field at Dignity Health Sports Park.

The gameday theme – “Feel the Orgullo” – was a salute to the significant contributions that Latinos have made to the past, present and future of Los Angeles. Orgullo is equivalent to the word "pride" and a nod to the multiculturalism that defines Los Angeles and the Chargers' year-round embrace of a growing a passionate Latino fan base.

Mares was invited to kick off the game in recognition of his boxing success, his involvement with communitites in Los Angeles and being an inspirational Latino athlete.

Mares has started his conditioning training in anticipation of heading back to the ring in 2020 following his eye injury in January. He has taken 2019 off to heal and focus on his televsion career, which includes working as an analyst and part of the announce team for Telemundo's "Boxeo Telemundo" series and boxing anaylst for FOX Sports on "Inside PBC Boxing." 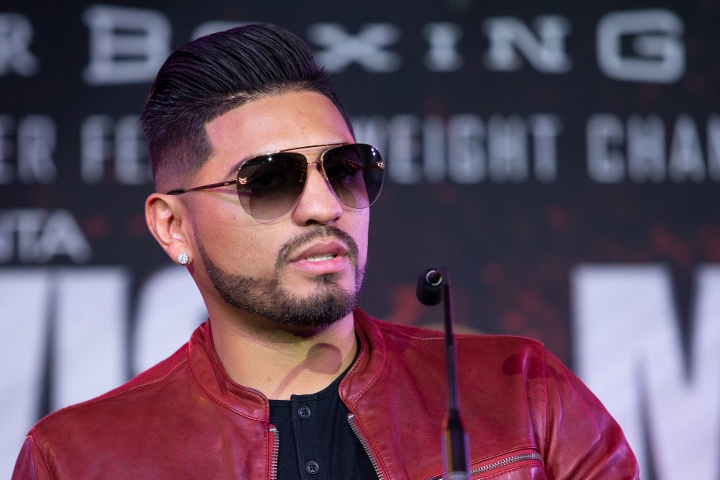 The exciting German star returns to the ring following a dominant points win over Spain’s Vanesa Caballero at the Friedrich-Ebert-Halle in Ludwigshafen in August, and will hope to continue her ascent up the featherweight division with a fifth professional victory.

“I am very pleased to compete against such an experienced opponent and to be in an eight round fight for the first time,” said Alisch. “Irma Adler has already boxed the best in the world and for World Championship belts, but as always I am well prepared and have had a great training camp.

“I made my professional debut at the CGM Arena so I will return to Koblenz with many positive memories, and look to make more!”

Adler, who has twice challenged for WBO World Super Featherweight title against Germany’s Ramona Kühne and Poland’s Ewa Brodnicka, and has shared the ring with a number of world-class fighters including Eva Wahlstrom, Delfine Person and Erica Farias, believes her experience will prove the difference on November 2nd.

“I know Sophie is very young and people are expecting great things from her, but I am much more experienced,” said Adler. “I am expecting a fantastic fight and will give my best to get the victory!”

“Sophie has had an excellent first year as a pro and she’s ready for these bigger tasks,” said promoter Nisse Sauerland. “It is unbelievable that she’s already so dominant at seventeen.

“Having her first fight over eight rounds against an opponent as experienced as Irma Adler will bring Sophie further forward. We think she’s ready for a title fight soon, maybe in 2020.”

‘Fighting For Future’ on November 2nd is a special event that will see ticket revenue and money raised from the evening donated to three charities: Laughing Hearts, a charity that provides support and opportunities to children affected by poverty, Parents' Initiative for Children with Cancer Koblenz, who provide support to the parents of children suffering from cancer in Koblenz and Education Unlimited, an education charity who encourage diversity and training across Europe.

Norway’s number one male boxer is back in the ring headlining a huge show at the historic Ekeberghallen venue alongside Katharina Thanderz, who meets Danila Ramos for the interim WBC World Super Featherweight crown.

Havnaa was last in action on June 22nd scoring a third-round stoppage win over Levani Lukhutashvili at the Forum Horsens in Denmark. This performance followed a career best win for the 30-year-old, who defeated Rad Rashid in front of his home fans in Arendal on March 2nd to claim his first major title.

Havnaa, the son of Norway’s only ever male World Champion, Magne Havnaa, must now put his World title aspirations on the line against his most dangerous opponent to date in order to prove he is ready to face the best in the division.

Sands, born in Haiti but now based in America, boasts an impressive 72 per cent knockout ratio with 18 of his 20 victories coming inside the distance. The 32-year-old is a former NABA-USA and Minneosaota State Cruiserweight Champion, who has also challenged for the WBO Oriental title.

“It’s amazing to headline a big show in Oslo,” says Havnaa. “Last time I boxed in Oslo was at the Spectrum on the undercard of Cecilia Brækhus in front of 10,000 fans. I’m sure this will be even better with all my supporters and a top Norwegian undercard. I’m very excited.

“My opponent is a very experienced skilled fighter with a long reach and good fundamentals. He is a big puncher, who has fought some of the best fighters in the world, and I will be preparing for the best Al Sands there is.

“I’ve always had a big talent to train hard, but now I’m also starting to master how to train smart. I’ve started to become an experienced fighter. I know what to do, and I know what not to do, and all this is going to take me to next level.

“You never know how good an opponent is until you’re trading punches with them, but from what I can see, Sands is my most dangerous opponent. Boxing is a sport full of surprises and with top shape cruiserweights, anything can happen, but on November 16th, I plan to show why I belong at the top.”

Promoter Nisse Sauerland admits he has taken a risk allowing Havnaa to face Sands, but reveals the reward could be a shot at the IBO World Champion.

“This is potentially a very dangerous fight for Kai,” said Sauerland. “We’re taking a risk here but the reward can be great. This is a chance for Kai to prove he belongs at the top level. If he comes through this, then we could look to make a fight between him and the current IBO World Champion Kevin Lerena.”

All the action will be broadcast live on Viasat 4 in Norway. Christian Ramberg, Programme Manager Sports for NENT Group, says:  “World class boxing finally returns to the capital with an amazing fight card. Kai Robin Havnaa will prove that he is a title contender against a very dangerous American opponent. With two knock out experts in action the viewers should not blink.”

The club’s all-time great Lucas Radebe led the ring walk in Warrington’s title winning performance against Lee Selby in May 2018. Now it is the turn of the club’s current Player of the Year Hernandez.

Spanish midfielder Hernandez and several other Leeds United players will be roaring on Josh from ringside when he face France’s Takoucht.

Warrington who rarely misses a match when his team are playing at home said: “Pablo is our own Spanish magician so to have him holding my belt and getting in the ring with me, wow.

“It is great that several of the players can make it because it was the close season when I beat Kid Galahad in the summer and they had a match the next day when I boxed Carl Frampton.

“Leeds United are such a huge part of my life so it’s inspirational having the players watching me box. It’s mad because these are the fellas I cheer every weekend as a fan.

“Having Lucas as part of the ring walk when I fought Selby was something else and having Pablo there fires me up for Takoucht.”

Hernandez has been sidelined with injury, but expects to return later this month and Warrington added: “The reaction I got when I put on Twitter that Pablo was part of my team this weekend was amazing.

“Just imagine the noise this weekend. Takoucht will have never heard anything like it.”