A hearing to discuss how long combat sports events will remain postponed has itself been cancelled. The monthly agenda meeting to have been held by the Nevada State Athletic Commission is officially canceled, state officials announced on Monday.

The session was due to take place on March 25 at state headquarters in Las Vegas, with a significant portion of the meeting to have determined how far out to suspend boxing and mixed martial arts (MMA) events in the wake of the coronavirus disease (COVID-19) pandemic.

That is no longer on the table, raising further doubt of boxing—or any other event featuring large gatherings—resuming its normal schedule anytime soon.

“Please be advised that due to the ongoing concern and consideration of the health and safety of the public in regard to the COVID-19 virus, the Regular Monthly Meeting of the Nevada Athletic Commission scheduled for Wednesday March 25, 2020 at 9:00 AM has been cancelled,” the commission’s office noted. “The Commission will determine at a later date when the next regularly scheduled meeting will be held.” 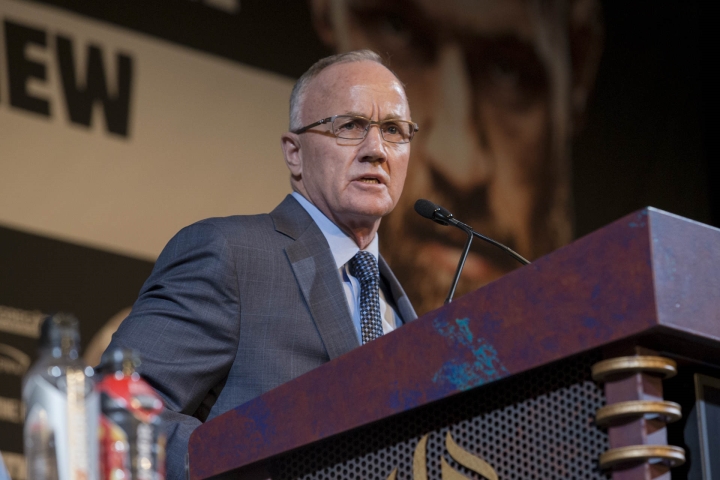 As previously reported by BoxingScene.com, the commission held an emergency meeting on March 14, its purpose to cancel any approved permits for unarmed combat sports for that weekend. At the time, it was determined that the March 25 meeting would provide full details on which shows would be postponed and those that can tentatively remain on the schedule.

It proved moot, as event handlers for shows to have been held in March and April have already taken the steps of cancelling such events.

Showtime was due to stage a televised tripleheader—topped by a junior featherweight title eliminator between Mexico’s unbeaten former bantamweight champ Luis Nery and countryman Aaron Alameda—this Saturday live from Park MGM in Las Vegas. Also lost in the wake of the health crisis was an April 24 Shobox card to have aired live from Cannery Hotel & Casino.

Las Vegas has also lost out on at least two Ultimate Fighting Championship (UFC) shows to have taken place over that stretch, despite the attempt to stage both events behind closed doors.

The yet-to-be-announced May 2 showdown between three-division titlist Saul ‘Canelo’ Alvarez and unbeaten super middleweight beltholder Billy Joe Saunders is also very much in jeopardy of not proceeding as currently scheduled. The event is due to stream live on DAZN from T-Mobile Arena, as part of Cinco de Mayo weekend.

No other pro combat sports events appear on the current Nevada commission schedule beyond May 2.

[QUOTE=deanrw;20477705]While they sleep on it Vermont and Idaho will become the new boxing hotbeds.[/QUOTE]LOL - Missouri is about to experience a great boxing re-emergence.

Move your fu[I]cki[/I]ng a[I]ss[/I]es and make a decision already. :boxing:

[QUOTE=Eff Pandas;20477685]We cancelling the meeting about cancelling boxing now?!?!? Wut the fook bruh. Put on a some hazmat suits or get a conference call setup & make a call you lazy corrupt mfers.[/QUOTE] While they sleep on it Vermont and…

We cancelling the meeting about cancelling boxing now?!?!? Wut the fook bruh. Put on a some hazmat suits or get a conference call setup & make a call you lazy corrupt mfers.