Nery: After I Beat Alameda, I Would Like To Fight Brandon Figueroa Next

Luis Nery is never foolish enough to look past the opponent in front of him—yet remains confident enough to envision in advance whom will be next in line.

The answer to that question could be provided in the moments before he is set to make his way to the ring this weekend.

Tijuana’s Nery (30-0, 24KOs) collides with countryman Aaron Alameda (25-0, 13KOs) in a vacant WBC junior featherweight title fight this Saturday. Their showdown is part of a six-fight Showtime Pay-Per-View event which airs live from Mohegan Sun Casino in Uncasville, Connecticut. The Charlo twins—Jermall and Jermell—co-headline the show, but two of the undercard bouts serve as particular interest to Nery. Prior to the hard-hitting southpaw entering the ring, the mandatory challenger will be established for the belt at stake in his own fight. 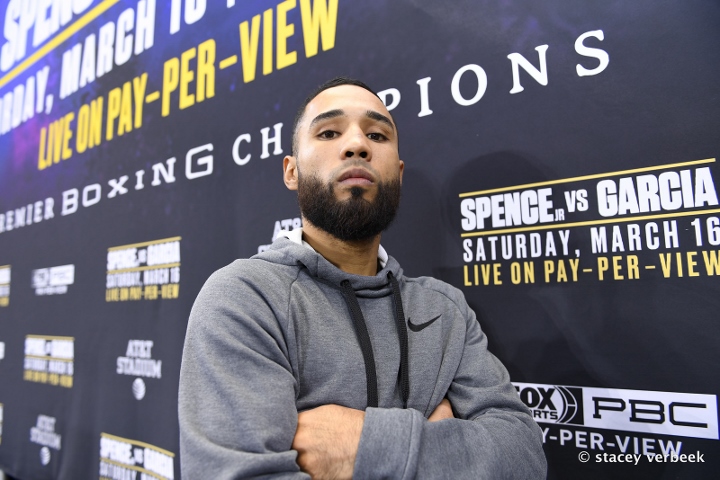 Former unified titlist Danny Roman faces former 118-pound titlist Juan Carlos Payano—whom Nery flattened in the 9th round of their clash last July in Las Vegas—in a final eliminator. It will be up to the WBC to order such a fight next, although it’s another undercard bout which piques Nery’s interest—that of Brandon Figueroa’s voluntary defense of his secondary WBA 122-pound title versus Damien Vazquez earlier in the evening.

“I truly believe that I am the best 122-pound fighter in the world,” Nery insisted to BoxingScene.com. “Besides myself, I see Brandon Figueroa as the best out there in the division. He is who I would really love to fight next.”

The general public would likely take issue with both claims, although such a pairing would be an attractive bout between two promising boxers 25 years of age and under.

Nery is a pound-for-pound level talent but is so far only a proven commodity at bantamweight where he previously held the WBC title. The 25-year old southpaw has only seen action outside the weight thus far in non-title capacity, with Saturday’s bout giving him the opportunity to become a two-division titlist.

Figueroa (20-0-1, 15KOs) has quickly advanced from prospect to contender to secondary titlist while emerging as a rising star within the Premier Boxing Champions (PBC) stable. The 23-year old from Weslaco, Texas earned an interim title following an 8th round stoppage of Yonfrez Parejo last April, defending the strap in a 4th round stoppage of Javier Chacon in a homecoming headliner last August in nearby Edinburg, Texas.

Three months later came the lone blemish on Figueroa’s record, fighting to a 12-round split decision draw with former titlist Julio Ceja who was more than four pounds over the junior featherweight limit.

Figueroa gets a softer touch this weekend in Vasquez (15-1-1, 8KOs), a fringe contender from Colorado who is based out of Las Vegas. Of the six fights on the PPV card, this is considered to be the least competitive on paper—but one which Nery will definitely check out if only as an early scouting report for his next intended target.

“Honestly, I like that I get to watch his fight while getting ready for my own fight later that night,” notes Nery, whose aforementioned win over Payano last July marks his last bout prior to this weekend. “I don’t know if I’ll be in the hotel or in the dressing room—whatever social distancing allows—but I will be watching his fight and I know he will be watching me.

“After I beat this guy [Alameda] to become a two-division world champion, I would like to fight Brandon Figueroa next, put our unbeaten records and world titles on the line.”

Figueroa could steal the show with his style but I fear that these fights he's getting into will take a toll on him sooner than later . needs to definitely work on his defense or he might be another Vargas…

So you know Mr Jake Donavan, you think Damien Vazquez is going to be a cake walk for Figuaroa? Figuaroa is in for a long night!!! I see an upset coming!!! People will see the real Sugar Saturday nite!!!

Figueroa, you have been put on notice, better you your defence and quickly