Beltran has big plans for his WBO super bantamweight titlist Navarrete (28-1, 24 KOs), who’ll be the co-featured attraction this weekend in Las Vegas for the Tyson Fury-Otto Wallin undercard on ESPN+.

Navarrete defeated Francisco De Vaca on Aug. 17 and less than a month later will be back in the squared circle after three rounds of quick work that night during the first ever boxing card held at the Banc of California stadium.

“He’s the best 122 pounder in the world. I want to make him famous, and this is a way to do it. He barely fought that night. He’s old school. He wants to be back in the ring immediately. Why wait? Let’s make the fighters fight,” Beltran told BoxingScene.com.

“I see Emanuel entirely cleaning out the division, and then moving up in weight to 126. But if Leo Santa Cruz wants to fight us, we’ll move up all the way to 130. That is a fight I would absolutely consider—tomorrow. Top Rank has done a great job co-promoting him in a Latin town like L.A. with his last fight, and now Las Vegas on Mexican Independence Day weekend. We’re grateful for these opportunities, but we want Santa Cruz." 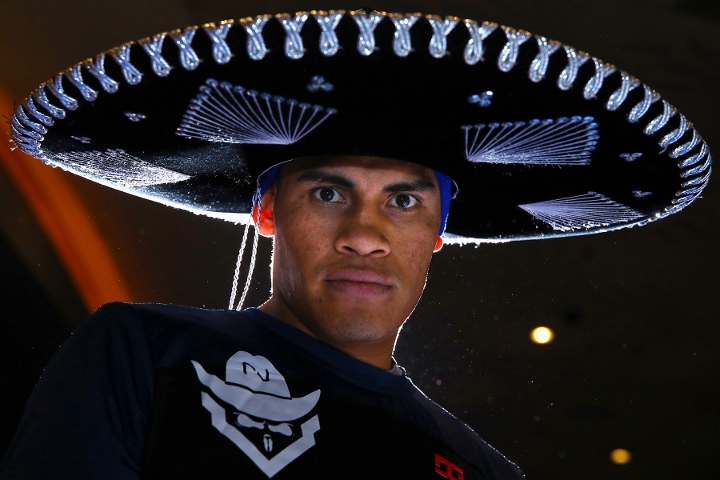 Navarrete made his US debut in emphatic fashion last December, decisioning Isaac Dogboe for the WBO championship, and stopping him again for good measure during their rematch in May.

Moving up two divisions to fight the seasoned Santa Cruz (36-1-1, 19 KOs) would be an ambitious task for the 24-year-old.

Santa Cruz, a three-division champion and currently a 126 pound WBA titlist, is looking to move up in weight and start campaigning at 130 pounds later this year.

“We feel very good, very strong,” said Navarrete after a recent workout in Tijuana, Mexico. “You have to remember that I fought less than a month ago, so I bring that conditioning and accumulated preparation and right now I feel very strong, very fast, without any weight problems and I'm ready to give a great fight, against a very strong opponent.”

Navarrete surely wouldn’t be back in the ring on three-weeks notice against Santa Cruz for an all-Mexican showdown, especially if he plans on adding eight pounds to his frame.

A clash in 2020 would be a palatable one for boxing fans to keep an eye out for.

Not gonna happen. He's not fighting GRJ, he's not gonna fight Emanuel Navarrete. I guess he's fighting a bummer for a vacant regular WBA belt at 130lb. People who criticize GGG for fighting bummers should criticize Leo Santa Cruz too.…

LSC is boring. I would rather see him fight Daniel Roman or Rey Vargas

Santa Cruz is a bum

Leo on vaction never even hear about him anymore. Gary Russell Should be ready for his annual defence some time next summer tho

I really don't get why Valdez never tried calling LSC out before running up to 130. F the politics, two high-profile mexican beltholders in a title unification and stylistically this fight would've been a no brainer, smh.