Efforts to have Jessie Magdaleno skip the line en route to a featherweight title have proven to be for naught.

BoxingScene.com has learned that an ordered vacant World Boxing Organization featherweight title fight between Magdaleno and Mexico’s Emanuel Navarrete is no longer on the books. A purse bid hearing which was won by Top Rank to promote the fight is now considered to have defaulted, due to a lack of written confirmation citing Magdaleno’s willingness to fight for the title.

“WBO Participant Jessie Magdaleno was granted a final 24-hour term upon notice of the “Resolution” to confirm in writing whether he will fight against WBO Participant Emanuel Navarrete for the Vacant WBO Featherweight Championship as ordered,” Luis Batista-Salas, chairman of the WBO Championship Committee noted in a resolution statement to both parties, a copy of which has been obtained by BoxingScene.com. “Lastly, Magdaleno was advised that failure to comply with the time frame established therein would be understood as if he would not participate and fight Navarrete and waiving any and rights therein.

“Consequently, having the Committee proceed in selecting and determining the first available contender in the WBO Featherweight Division. Whereas, on Tuesday, August 18, 2020, this Committee confirmed receipt of written communication on behalf of Mr. Jeremy Koegel, Counsel for Top Rank, Inc., promotional representative for Jessie Magdaleno, advising that shortly after Top Rank won the “Purse Bid” for the bout, Top Rank sent Magdaleno a bout contract offering monetary compensation consistent with the terms of the bid. Top Rank has not received a response from Magdaleno since that time, and all indications are that Magdaleno intends to decline the bout on terms consistent with the “Purse Bid”. Therefore, Top Rank requests to move forward with the fight with the next available contender in the WBO Featherweight Division.” 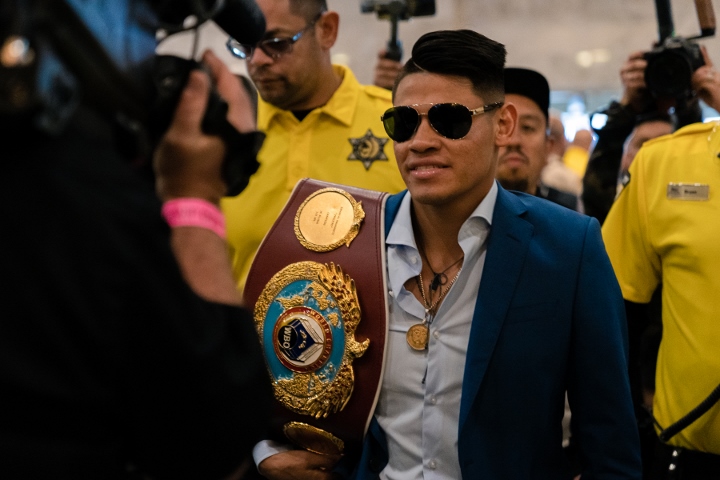 The benefactor of such a fallout is Ruben Villa (18-0, 5KOs), a 23-year old featherweight contender from Salinas, California who was the highest-rated available challenger to the WBO title prior to the start of the ongoing coronavirus pandemic. Villa somehow lost his place in line upon the first update of WBO rankings since the global health crisis, with the July 2020 set showing Navarrete (32-1, 28KOs) and Magdaleno (28-1, 18KOs) ranked ahead of him.

Villa’s team—Banner Promotions and Thompson Boxing—were understanding of Navarrete’s placement, having reigned as WBO junior featherweight champ before vacating to challenge for the 126-pound crown. The advancement of Magdaleno, however, did not sit well.

Justification for Magdaleno came in his being the only boxer among the WBO Top Four at the time to have fought during the pandemic, claiming a 10th round disqualification win over Dominican Republic’s Yenifel Vicente this past June in Las Vegas. The feat didn’t pass the smell test among those who sensed that Magdaleno’s alliance with Top Rank—with whom the WBO has always enjoyed a healthy working relationship—played a greater role in his being in position to fight for the title before Villa.

A title fight between two boxers affiliated with Top Rank still didn't help in advancing negotiations to reach a deal. The bout was subject to a purse bid hearing, which Top Rank claimed with an offer of $250,000 as the only bidder present at the session. As is the case with all purse bid proceedings, there exists a deadline for contracts to be submitted to the sanctioning body before it is invalidated by default.

Under normal circumstances, a vacant title fight between the top two rated contenders would result in a 50/50 split of the winning purse bid amount. That split changes to 60/40 in the event that one side is deemed to gain hometown advantage.

Such was the case here as the fight was targeted to take place in mid-to-late October in Magdaleno's hometown of Las Vegas, Nevada. It would leave his team with a $100,000 payday, with $150,000 due to Navarrete.

Whether it was believed that such a fight was worth more to Magdaleno or if other contributing factors, it led to radio silence when it came time to return contracts to the WBO or any form of confirmation of interest in proceeding to the bout.

“As of Wednesday, August 19, 2020, the World Boxing Organization has not received any communication, whether by Magdaleno or his manager Frank Espinoza confirming his participation in the bout as mentioned earlier,” noted Batista-Salas. “Moreover, the 24-hour period granted has elapsed, and this Committee must resolve the matter at hand and proceed according to the WBO Rules and Regulations of World Championship Contests.

NOW, BE IT RESOLVED by the WBO Championship Committee, which issues the following ruling:

2.     The WBO World Championship Committee, in its discretion, reserves the right to determine and issue any other ruling deem necessary, helpful, and convenient to accomplish the purposes policies and intent of the WBO Rules.

“This is a final decision of the WBO Championship Committee. The affected WBO participant may appeal such determination to the Complaint and Grievance Committee as per Rule 34, which as per Rule 3(e) of the WBO Appeals Regulation, must be submitted in writing to the WBO President within fourteen (14) days of this decision as to its sole and exclusive remedy.”

Upon acceptance of the WBO’s invitation, Villa will then be instructed to enter negotiations with Navarrete. Should the two sides not come to terms within the prescribed period, the fight will then head to a purse bid hearing.

Villa followed up a three-win campaign in 2019 with his most recent victory, a 10-round decision over Alexei Collado this past January in Shreveport, Louisiana.

Navarrete made his featherweight debut this past June, scoring a 6th round stoppage of Uriel Lopez behind closed doors in Mexico City. The bout was his sixth in just 13 months, having racked up five defenses of his WBO 122-pound title in just a nine-month period. Navarrete’s title reign began with a 12-round win over unbeaten Isaac Dogboe in December 2018, knocking out the Ghana-bred boxer in the 12th round of their rematch last May for the first of five successful defenses before vacating the title earlier this summer.

Big step up for Villa. Navarrette is the best 122 and immediately the 2nd at 126 after Stevenson. He's in 100% prime and better than Warrington. Hope Villa wins, he seems marketable.

Not surprised. Magdaleno is not brave enough to fight Navarrete. Never will be. Good! Villa is a much better opponent and deserves the shot.

That purse bid number was comical.. no way was Magadelono fighting for such a crap purse.. smart to avoid the fight, he can take a crap purse to fight someone much less dangerous. Villa would be a fool to take…

[QUOTE=richardt;20715305]Villa is a hell of a boxers with great speed and movement and judges distance well. Been a favorite of mine for some time.[/QUOTE] Well he getting knocked the phuck out! 🇲🇽

Justice prevails. Ruben Villa shouldn't have been passed over in the first place. The only reason Magdaleno jumped the line was because of the disgustingly blatant corruption between Top Rank and the WBO.