The second purse bid hearing to be conducted via Zoom managed to outdo its predecessor.

Terms have been settled for the vacant World Boxing Organization (WBO) featherweight title fight between Emanuel Navarrete and Jessie Magdaleno. Top Rank—which represents both boxers—claimed the rights to the fight with a $250,000 offer as the lone promoter for a purse bid hearing on Tuesday afternoon, conducted through a Zoom conference call.

With the bid came the expectation for the fight to take place on October 17 or 24, on an ESPN platform from the MGM Grand Conference Center (“The Bubble”) in Las Vegas. 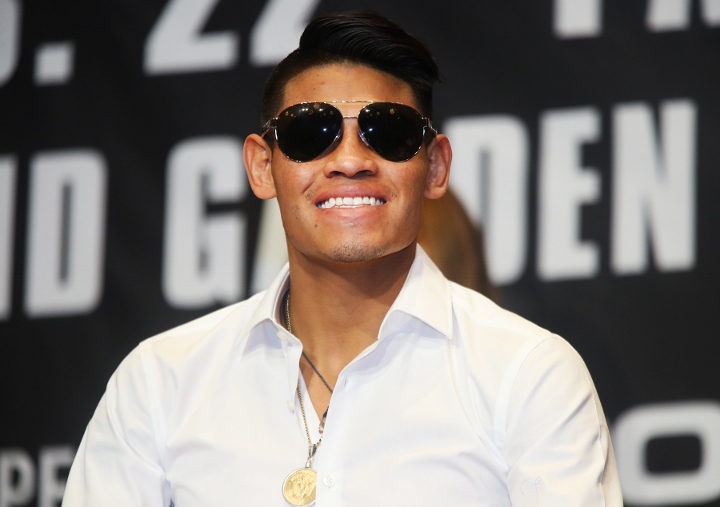 Per Section 13 (a), subsection 2 (B), and (C) of the WBO Championship Rules, either side gaining what is classified as hometown advantage for a vacant title fight would concede the greater amount of a 60/40 split to the visiting boxer.

With the fight designated to take place in Magdaleno's home base of Las Vegas, Navarrete—who hails from San Juan Zitlaltepec, Mexico—would be in his right to demand the favorable end, or $150,000 of the total purse amount. Magdanelo would be left with a $100,000 purse for his first title fight in more than two years.

The WBO featherweight belt became available earlier this summer, shortly after Shakur Stevenson (14-0, 8KOs) moved up in weight to claim his first win as a junior lightweight. The 2016 Olympic Silver medalist ended his featherweight title reign without making a single defense after having won the belt in a 12-round wipeout of Joet Gonzalez last October.

Stevenson was installed as the number-one contender in the WBO 130-pound rankings in the most recent ratings update in July, shortly after scoring a 6th round stoppage win over Puerto Rico’s Felix Caraballo this past June. A similar process was afforded Navarrete (31-1, 27KOs) in the first ratings update conducted by the WBO since the pandemic. The move came shortly after he debuted at featherweight, stopping overmatched countryman Uriel Lopez in six rounds this past June in Mexico City.

The win marked his permanent abandonment from the 122-pound division, where he made five successful defenses of the WBO title he claimed in a 12-round win over previously unbeaten Isaac Dogboe in December 2018. A 12th round stoppage win of Ghana’s Dogboe last May marked a hectic schedule where Navarrete crammed six fights into a 13-month span.

Navarrete’s last title defense came in February, scoring an 11th round stoppage of Joe Santisima on the undercard of Tyson Fury's 7th round stoppage of Deontay Wilder in their heavyweight championship rematch in Las Vegas. He enters the featherweight title bout versus Magdaleno having scored knockout wins in each of his last six starts.

It was also his only fight of the year, as Magdanelo wouldn’t resurface until his title-conceding 11th round knockout to Dogboe in their April 2018 Fight of the Year-level war.

The lone loss of his career also marked the last time Magdaleno would see the 122-pound division. A three-fight win streak has followed, all coming at featherweight. In his most recent performance, Magdaleno dominated Dominican Republic’s Yenifel Vicente, who fouled his way into a 10th round disqualification versus for the former titlist this past June in Vegas.

The win was right on time for Magdaleno, who was the only boxer among the four highest ranked WBO featherweight contenders at the time to have fought during the pandemic. Such a distinction justified—at least in the eyes of the WBO—his advancement to the number-two spot, bypassing Salinas, California’s Ruben Villa (18-0, 5KOs) and England’s Ryan Walsh (26-2-2, 12KOs) whom were previously ranked two and three.   Further aiding this matchup was the divisional departure of Michael Conlan (13-0, 7KOs), who was the number one contender prior to the pandemic. The 2012 Olympic Bronze medalist and two-time Olympian from Belfast, Northern Ireland has since elected to campaign in the 122-pound division where he will debut this weekend in his hometown.

Tuesday’s purse bid hearing now officially becomes the first to be fully conducted via Zoom. Normal procedures call for a hearing to take place at WBO headquarters in San Juan, Puerto Rico or on site of a major fight. The virtual session came in lieu of participants traveling due to the ongoing coronavirus pandemic.

The World Boxing Council (WBC) scheduled a similar session early on Tuesday, to determine promotional rights for an interim lightweight title fight between Ryan Garcia and Luke Campbell. The session was postponed shortly after going live, as both sides requested a seven-day extension to finalize terms.

Navarrate getting a big KO in this one. I give Magdelano virtually no chance in this one.

We really didn't see anything special from Magdaleno against Vincinte, maybe two hooks and that's it. Heavy favorite is Navarrete

Good match up, but the bid is a disgrace, I know it's tuff times but 250k? This fight deserves at least 500k bid. I guess Bobby is saving his money to pay the diva's in his stable, not going to…

[img]https://i.imgur.com/PeJYRpF.gif[/img] Emanuel Navarrete's unwavering stinging pressure is going to force Jessie Magdaleno to take a knee, if he ( Magdaleno ) does not get systematically chopped down. AND THE NEW 2X, 2 WEIGHT FEATHERWEIGHT CHAMPION OF THE WORLD!