Villa knew he had to be “perfect” to upset Navarrete in their featherweight title fight, but he had difficulty dealing with the awkward Mexican’s aggression and strength early in a main event ESPN aired from MGM Grand Conference Center in Las Vegas. Navarrete knocked down Villa twice – once apiece in the first and fourth rounds – and withstood the skilled southpaw’s rally in the second half of their bout to win their 12-round, 126-pound championship match by unanimous decision.

Judges Tim Cheatham and Max De Luca scored Navarrete a 114-112 winner, thus those two knockdowns were the difference on their scorecards. Judge Patricia Morse Jarman credited Navarrete with a 115-111 victory.

The 25-year-old Navarrete (33-1, 28 KOs) won the WBO featherweight title Shakur Stevenson (14-0, 8 KOs) gave up over the summer, when he decided to remain in the junior lightweight division.

“I told you guys he is a great boxer,” Navarrete told ESPN’s Bernardo Osuna after his win. “And that’s exactly what he did. He used his skills. And once he felt the power, I told you he was gonna start moving even more. And he started to get on his bike, move around the ring. I couldn’t get the knockout, but the most important thing is I came away with the victory and I’m now a two-division world champ.”

His victory made Navarrete, of San Juan Zitlaltepec, Mexico, a champion in a second division. He previously owned the WBO junior featherweight title, but he relinquished it to move up to the featherweight division.

The 23-year-old Villa, of Salinas, California, lost for the first time as a pro (18-1, 5 KOs). He also suffered the first two knockdowns of a pro career that began in July 2016. 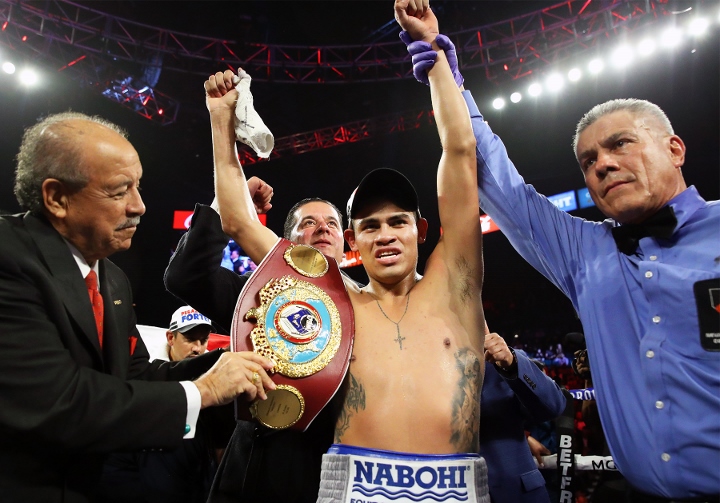 Villa’s right hook and straight left hand landed toward the end of the 12th round. He also defended himself by mostly moving out of Navarrete’s punching range during those final three minutes.

Villa worked well off his jab throughout the 11th round and mostly prevented Navarrete from connecting with his power shots. Villa’s left uppercut connected just after the midway mark of the 11th round, but Navarrete nailed him with a right hand in that exchange.

Navarrete’s right hand got Villa’s attention with 28 seconds to go in the 10th round.

Villa connected with a straight left with just over a minute remaining in the ninth round. A right-left combination by Villa also landed a few seconds before the ninth round concluded.

Villa landed a hard jab just after the midway mark of the seventh round. Navarrete landed a right uppercut as Villa moved backward with a minute to go in that seventh round.

A right hand to the body by Navarrete slowed down Villa with just under a minute remaining in the sixth round. Villa mostly managed to avoid Navarrete’s power shots in the round, but he didn’t land many punches of his own.

Navarrete aggressively went after Villa throughout the fifth round. Villa held and used his legs to avoid Navarette’s onslaught and made it to the end of that round.

Villa used his jab and movement in the first two minutes of the fourth round, but Navarrete nailed him with a left hook that dropped him with 52 seconds left in it. That shot sent Villa down to one knee and his gloves.

Down for the second time in the fight, Villa again answered Mora’s count and finished the round.

Villa worked well off his jab and moved out of Navarrete’s punching range at times in the third round. Navarrete caught Villa with a left hook just before the third round concluded.

Villa landed a right hook and then a left hand in the final 10 seconds of the second round.

Navarrete landed a left hook just after the midway mark of the first round. An awkwardly thrown left uppercut by Navarrete knocked Villa to the seat of his trunks with 31 seconds remaining in that opening round.

Villa, who seemed more surprised than hurt, answered Mora’s count by the time he reached four.

Navarrete entered their fight as the WBO’s number one featherweight contender. Villa is ranked second.

The WBO initially ordered a bout between Navarrete and Jessie Magdaleno (28-1, 18 KOs) for its vacant featherweight title. Las Vegas’ Magdaleno turned down that fight once promoter Top Rank won a purse bid and offered him $100,000 from its winning offer of $250,000.