Nate Robinson did his homework before venturing into otherwise unfamiliar territory.

The former three-time NBA Slam Dunk champion becomes the latest celebrity to cross over into boxing, as the 36-year old from Seattle makes his pro debut. The moment comes in a strange grudge match with YouTube celebrity Jake Paul, with their scheduled six-round cruiserweight bout taking place this Saturday, live on Triller Pay-Per-View from Staples Center in Los Angeles, California.

Training for the event has left Robinson recalling the days before officially entering the NBA.

“It’s been pretty good,” Robinson claims of preparing in isolation during the ongoing coronavirus pandemic. “Besides training for the draft, back in my younger days. Just me and my coach training in the gym, getting my shots up and preparing myself to be drafted in ‘05. That was the last time I experienced anything like this.

“Now I get the chance to showcase what I can do.” 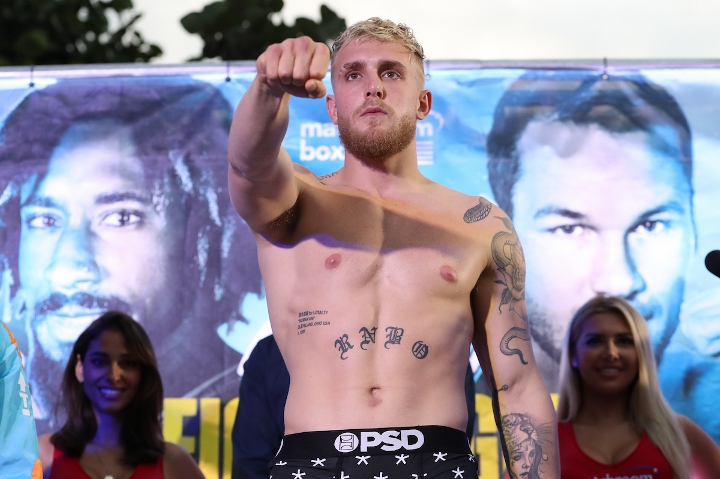 It remains to be seen just how much of Robinson’s pure athleticism will translate in the ring. The former college football standout who went on to enjoy an 11-year NBA career ventures into new territory, and as the betting underdog against the comparatively more experienced Paul (1-0, 1KO). Robinson gives away four inches in height and reach, and at least eight pounds in body weight as he was a stacked 181 pounds compared to Paul’s official mark of 189 at Friday’s pre-fight weigh-in.

The bout—which serves in supporting capacity to an all-legends eight-round exhibition between 54-year old Mike Tyson (50-6-44KOs) and 51-year old Roy Jones Jr. (66-9, 47KOs)—was supposed to take place this past September along with the rest of the show. The event was postponed by 12 weeks, which Robinson believes only works to the advantage of someone at the beginner’s level.

“Just the progress I’ve made over the months have been awesome,” believes Robinson. “I think that getting the fight pushed back was a great deal for me. It was more time for me to focus and get right. I get to show people the hard work I put into this. November 28 is gonna be a great show.”

While the sport is largely unfamiliar besides his longtime admiration of it, Robinson is well-versed on everything his outspoken opponent brings to the table.

Paul is better known among his social media platforms but does have an official pro win under his belt. The moment came in a 1st round knockout of fellow YouTuber and miserably underdeveloped AnEsonGib this past January in Miami.

“I follow Jake’s YouTube, how can you not,” admits Robinson. “You and your brother (Logan Paul–0-1 in the pro ranks) are only fighting YouTubers.”

The claim, of course, was met with a clapback by Paul in noting that his foe has yet to fight, period.

“Yeah, I ain’t fought nobody,” acknowledges Robinson. “But I’m fighting you and I’m gonna beat your ass.”

[QUOTE=Nomadic;20915199]A YouTuber and a retired basketball player is fighting a professional fight on two retired professional's exhibition fight.....OK. I'm conflicted on which fight I'm more interested in watching.[/QUOTE] The biggest thing to come out of this is whether there's a…

[QUOTE=Nomadic;20915199]A YouTuber and a retired basketball player is fighting a professional fight on two retired professional's exhibition fight.....OK. I'm conflicted on which fight I'm more interested in watching.[/QUOTE] Out of all these YouTube boxers, I think Jake Paul is the…

[QUOTE=Nomadic;20915199]A YouTuber and a retired basketball player is fighting a professional fight on two retired professional's exhibition fight.....OK. I'm conflicted on which fight I'm more interested in watching.[/QUOTE] For the cringe alone this is the fight of the night!

A YouTuber and a retired basketball player is fighting a professional fight on two retired professional's exhibition fight.....OK. I'm conflicted on which fight I'm more interested in watching.