On its surface, the upcoming boxing match between Jake Paul and Nate Robinson would appear to be nothing more than a high-priced publicity stunt.

The fight serves as the chief support for the Mike Tyson-Roy Jones Jr. exhibition bout which will air on pay-per-view this weekend. The event is being presented by Triller, a social media video app which has pulled out all the stops in an attempt to compete with TikTok. The company has paid vast amounts of money to lure in creators from other social media platforms, including Sway Boys and Charli D’Amelio. Its majority owner, Ryan Kavanaugh, told the New York Times that he would estimate a TikTok star making $300,000 would get paid $2 million to post on Triller.

Triller has used strategies ranging from the lavish, such as gifting luxury cars and moving its creators into rented mansions, to nefarious, including planning red carpet parties amidst a pandemic and not censoring QAnon-related content and associated disinformation (both of which the company has since backtracked on), all in an effort to get as many downloads as possible.

As of last Tuesday, the app was ranked No. 596 in the App Store, according to the Los Angeles Times.

Looking for another boost, it brought two of the world’s most recognizable living boxers out of retirement (kinda) and complimented them with a showdown between a social media star and a star athlete, perhaps borrowing an idea from DAZN, which was negotiating a bout between Paul’s brother Logan and NFL wide receiver Antonio Brown.

Paul himself is an investor in Triller, and one of the most popular internet personalities in the world. He’s 1-0 as a pro boxer, thanks to an easy victory over AnEsonGib on DAZN in January, and has remained in constant training since then. Paul says his goal is to win a world title eventually and has indeed surrounded himself with a legitimate boxing team, including trainer BJ Flores and longtime super middleweight contender J’Leon Love. 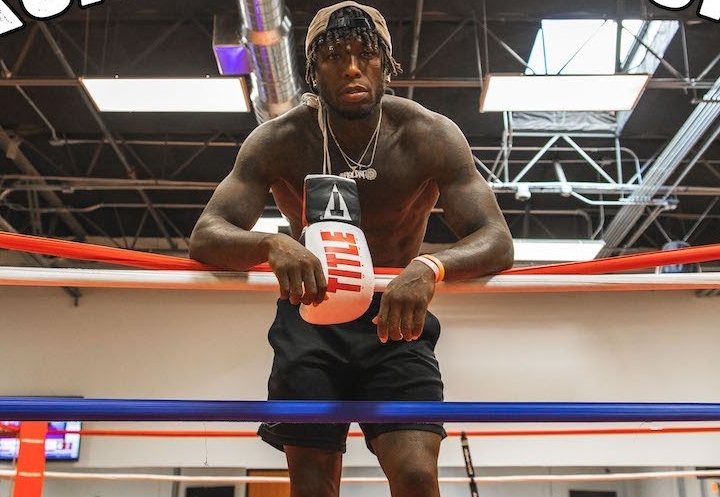 But however genuine his boxing goals and dedication are and have been, Paul has a financial stake in the success of the event and by extension the company, not to mention an acute understanding of how the added sports media coverage surrounding this bout will aid his primary career as a content creator.

For Nate Robinson though, the motivation behind taking this bout couldn’t be purer.

The three-time NBA Slam Dunk Competition champion might have been a basketball player, but he has always envisioned himself as a fighter. As a 5’9” point guard, he played with intensity and aggression out of necessity, sure, but also because that was programmed into him from a young age.

“My Dad always told me ‘be that guy you would want to be with in a foxhole,’ and I've always wanted to be that guy out here, with whatever,” Robinson told Boxing Scene. “If I had a homie or a teammate or whatever that was down and out and needed help, I was always there. If they were going to scrap against some other guys, shit, I'm gonna ride with you. That's just the type of person my Dad and my Mom raised, I ain't no sucker.”

Robinson’s father Jacque, a former NFL running back, didn’t just use fighting analogies to motivate his kids as people often do, he literally meant that he wanted Nate to be prepared to fight anyone, anytime.

When Robinson hits the bag at the Tenochtitlan Boxing Club in Renton, WA with trainer Paco Reyes, it takes him back to the days when he mimicked Muhammad Ali sparring his friends during sleepovers.

“It just brings back so many memories, man. When I was younger, my brother and I, we used to hit the bag all the time. Hit the bag, get the gloves, get after each other so we could prepare each other for situations if we were ever in a fight we know what it feels like. Just to be able to protect ourselves, to know the fundamentals,” said Robinson. “My Dad and my step Dad used to do a great job keeping us polished, keeping our mentals right, and just keeping us ready for situations. And now I get an opportunity to showcase what I can do when it's really time and your life is on the line.”

It’s unclear what the genesis of the bout with Paul is, but the running story is that Robinson’s barbs towards Paul during a TMZ Sports interview were enough to set off negotiations for real.

Robinson carried the reputation of an antagonist during his time in the NBA. While his peers almost universally express love for him, his scrappy personality got him into conflicts both verbal and physical more often than most players. He feuded with coaches, he chased a teammate with a broom, he tried to fight someone naked in the shower, he tackled J.R. Smith into the crowd and pretty much offered to fight the entire Denver Nuggets roster.

Around 2013, Robinson has said he fell into a depression and began seeing a therapist. He felt misunderstood as a person, and the effort he was putting in to dampen his naturally gregarious nature and intense playing style was weighing on him emotionally.

In boxing, Robinson found a sport that would welcome him. Boxing is less formal than the NBA—it’s basically never pushed anyone out for any kind of behavior, no matter how heinous. Robinson’s brand of swagger and aggression is not only not discouraged, it’s the very ethos of the sport.

The sport that was always in Robinson’s heart turned out to be the place where he could finally feel free.

“It's the fact that I can be myself. My coaches don't look at me like I'm a problem like they did when I was in the league, like oh, he's a cancer, he's a free spirit, he wants to do what he wants to do or however they looked at me. It sucked knowing I couldn't come in every day and be Nate Robinson. Here, they give me the freedom to be me,” said Robinson.

“It's easier to show up, do the work and do what I do every day. It's fun, it's challenging because of the work I put in, but it's easy to be myself. It's easy to smile and hit the mitts and run my miles and I get to be me, to be comfortable with who I am. I don't get judged for being who I am. It's fun to just show up and enjoy being who I am, who my Mom raised me to be.”

This fight is a violent distillation of what the world of online content creation has come to be. Every Triller video, let’s say, is curated and edited, and its purpose is to make money and garner attention. But every person who traffics in the online economy is always sure to use the buzzword “authenticity” in describing what they do. In every video, there’s at least a sliver of it—it’s a lens into that person’s dwelling, their fashion, their musical taste, something. The social media landscape is predicated on a perceived connection with the creator—after all, the whole universe was born out of sites and apps created to stay in touch with our friends.

But what happens in the six rounds or less Robinson and Paul are set to fight for can’t be fabricated. Even training to get ready for a fight, something both men have taken seriously, takes a whole lot more dedication than learning the choreography to Jawsh 685 or Megan Thee Stallion. No one who steps into a boxing gym, let alone an actual pro fight, steps back through the ropes without revealing and learning something about themselves.

This fight is a publicity stunt, and it is an informercial for an app. But for Paul, and perhaps even more so for Robinson, it’s a whole lot more.

It’s an opportunity for true authenticity.

“Everybody's already counted me out so many times. When I was in the league I had to prove everybody wrong, I had to play with a chip on my shoulder every game. I had to wake people up and let them see I'm really a hard worker,” said Robinson. “Come November 28 I'm going to show the world all the hard work I put in. Show them I'm really built for this.”

Jake paul for the win.

I think Nate will get stopped

Who gives a FK. This is suppose to be a REAL BOXING SITE, not key board fighting.

R-Truth is a boxer now?

[QUOTE=Get em up;20906166]Point taken I'm just picking the natural athlete over the youtuber with 3 or 4 boxing matches under his belt.[/QUOTE] Yea... Nate won't be able to do anything with that. Unless he's had some serious, long training over…