It was set to be a raucous night in Doncaster on April 24th; IBO & WBC super featherweight world champion, Terri Harper's homecoming in an all-British world title clash live on DAZN & Sky Sports. Instead, a planet gripped by a crippling virus has seen the entire sporting schedule completely and utterly obliterated. A date in June has tentatively been set for Olympian, Natasha Jonas to challenge Harper for her world titles.

On the evening that I spoke with Jonas, the fight was still scheduled to take place on April 24th, albeit with a cloud of uncertainty hanging over it. "We've got to just keep training like it is (on) until we hear otherwise," the thirty-five year-old explained pre-postponement. 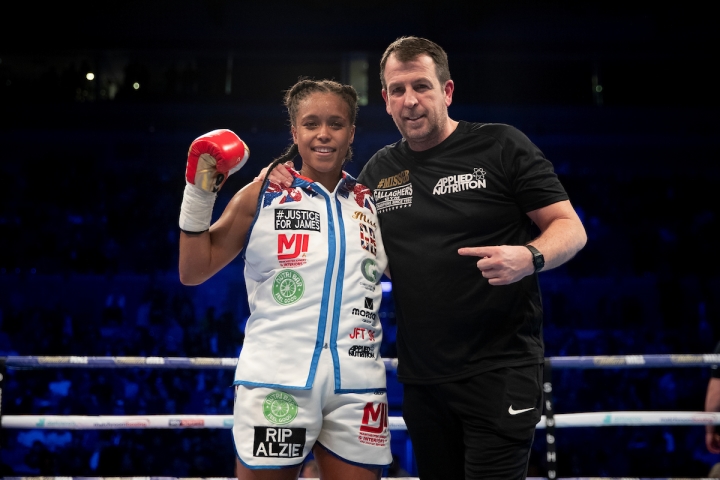 Promoter, Eddie Hearn has been exploring the possibility of staging fights behind closed doors and it's something the amateur world & European championship medallist would somewhat welcome.

"I think at worst, it would be behind closed doors, which isn't great for me in a world title shot, but if it's between that and not having it at all - I'd choose that all day."

The undefeated Harper will go into the fight as the betting favourite, but fans would be foolish to write-off the amateur standout from Liverpool. Jonas was a pioneer for the sport of boxing competing in the first-ever Olympic boxing tournament for females at London 2012.

"It's mad because it was only when I retired from amateur boxing that I ever appreciated what I did there," she said. "As an amateur, I don't think you appreciate what you do in the moment. It's only afterwards when I was doing a lot of work in schools and doing a lot of motivational talks and people would say, 'You're the reason I do boxing'. That was mad because at the time I was so focused on my own journey that I didn't see the effect it was having on others."

It took one of the greatest, if not the greatest, female boxers of all-time to knock Jonas out of the 2012 Olympic tournament at the last-eight stage - two-time Olympic champion, Katie Taylor. Jonas, Nicola Adams and Savannah Marshall all of a sudden became household names during the summer of 2012.

"We'd never had a tournament at home, so everywhere we were going, we were going into the lion's den," the southpaw told me. "Politically the whole world hates England and GB. So, it came to the Olympics and we had 10,000 people and 99% of them are cheering for you - it was madness. But then also the media attention that we got because it was the first time women's boxing was included (in the Olympics) and also because we'd all qualified, no-one knew who we were and there was this rush to find out who these three women were."

With the Olympic games of 2012 a distant memory; Jonas now has the chance to reach the pinnacle of the pro game with a victory over Terri Harper. At just twenty-three, Harper has already achieved so much and there is respect between both boxers. Jonas was especially impressed with the way Harper unified the IBO & WBC world titles in February.

"It was a good fight. Obviously, Eva's been a world champion for a long time and she's very experienced. I'd seen her in a European championships and then she turned professional. She was a good amateur; she had a good pedigree. You can't knock Harper for beating her."

This all-British world title clash, that will hopefully happen in June, isn't about any pre-fight antics, trash talk or histrionics outside the ring - it's about two highly-rated prizefighters putting it all on the line for fans of boxing.

"I think they can expect two skilled boxers giving it their all and giving it everything," Jonas said. "May the best woman win, at the end of the day. I think I gave her one of her ABA trophies and it's madness that it's come full circle and we're boxing each other. I think she's very skilled. I think she's fit, she's fast, she's hungry but when it comes down to it - I just think I'm better."