Natasha Jonas: I'm Physically, Mentally Better Than I Have Ever Been

Natasha Jonas is used to not being a sporting hero in the eyes of her daughter and does not really expect that to change if she becomes a world champion on Friday, but she does have a lot of competition even in her own family.

“She knows what I do, but I think she is more into Nikita playing football, going to the matches and making as much noise as she wants,” Jonas said. “She is more impressed with what Nikita does than me, I am just boring mum to her.” 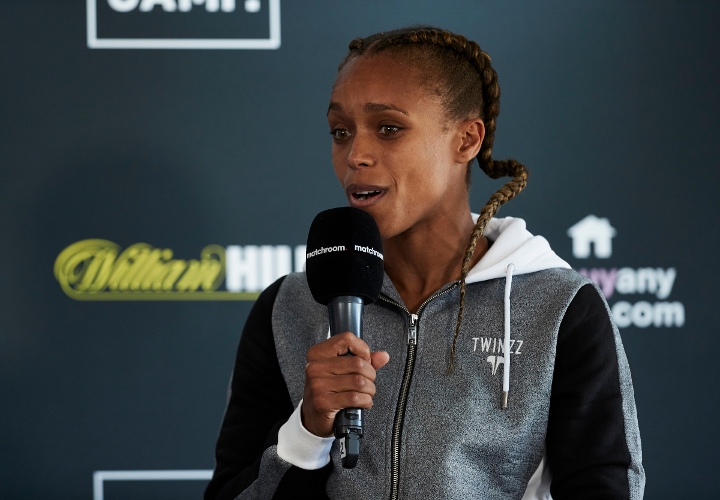 Jonas was a footballer herself before switching to boxing. It proved to be a good move, too, as she spent six years on the Great Britain squad, becoming the first British female boxer to win a bout at the Olympic Games, in London in 2012, and winning a world bronze among a string of international medals.

The professional game was a bit of an afterthought, though. She retired after a toe injury she suffered at the Commonwealth Games in 2014 required surgery, and decided to start a family.

“When I retired, there wasn’t really an option to go professional and make a living out of it,” the 36-year-old Liverpudlian said. “There were very few big promoters that supported it. It wasn’t televised, it wasn’t backed by any corporate sponsors, it wasn’t as big a scene as it is now.

“When Katie Taylor turned over and paved the way, everyone received it well. Eddie (Hearn) backed it, then Frank Warren backed Nicky (Adams) there was an opportunity there.

“My little girl then was now two and in a routine that didn’t involve me much. So, I had all this spare time on my time, I thought ‘OK’.”

Things went reasonably smoothly until she was stopped by Viviane Obenauf in 2018. That Harper has since beaten Obenauf is the bit of form many point at to dismiss Jonas’s chances.

But, while Harper is 13 years Jonas’s junior, Harper does not have the years of international experience that Jonas has.

“When I broke it down, there was nothing she did that was better than me,” Jonas said. “She has proved she can go ten rounds, so the only thing I had to make sure was that I was fit so I can do that, because I have never done it before.

“I have put myself in the best possible place, emotionally, physically, mentally to make sure I am the best athlete on the night. There is nothing half-hearted, I have done everything that has been asked of me to make sure I can compete with her fitness wise.”

She hasn’t been short of sparring for this fight, either, having done wounds with Louise Orton, Kirstie Bavington, Sarah Dunn and Chantelle Cameron, a rival in their days on the Great Britain squad, and soon to be a world-title challenger in her own right.

“We know each other inside out, but we have both developed differently in the professional game,” Jonas said. “Every single person I sparred brings something different to the table. Everything I believes she will bring, I have covered.

“My times are better than ever, my strength is better, every single training camp has improved me,” she said. “You are always improving, it is about where you mind is. This time I have brought my mind with me. I have turned the clock back.

“People think I am a 36 year-old and old to be getting in the ring. They are wrong. I am physically and mentally better than I have ever been.”

Should she get past Harper, there is the carrot of a possible rematch with Katie Taylor. The Irish boxer beat her in the quarter-finals at London 2012, a bout that had the distinction of having the loudest crowd noise of the whole Olympics. Jonas turned professional with one eye on Taylor, but it hasn’t turned out that way, so far.

“No one wants revenge more than I do,” she said. “But I have looked beyond the fight in front of me before and it didn’t end well, so I will concentrate on where I am now.”

She did look amazing at the weigh in. It will be incredibly tough, but I hope so much and really feel that she can do it 💪