When the second wave of three World Boxing Super Series tournaments was announced in 2018, the eight-man field at bantamweight looked like the best of what admittedly were all quite stacked fields. It had three of the four major beltholders, one of boxing’s most talented young stars, a big name veteran, and a less certain than certain path to the finals for anyone.

A lot can happen from paper to canvas.

While all three tournaments have delivered various thrills, including a fantastic final at Jr. welterweight weeks ago between Josh Taylor and Regis Prograis, bantamweight has been a bumpy ride.

Consider the arrival of future Hall of Famer Nonito Donaire in the finals. Coming off losses in two of his last three fights at higher weights, and not having fought at bantamweight since defeating Omar Narvaez in 2011, Donaire was an underdog to advance past the first round. Fate had other plans. After a competitive first three rounds, then-undefeated and recently unified titlist Ryan Burnett tore an oblique muscle and was forced to retire in the fourth round.

Suddenly, Donaire was a beltholder (WBA) again setting up a fascinating semi-final with WBO titlist Zolani Tete. Tete had won 12 in a row, with titles in two weight classes. Then, the week of the fight, a shoulder injury forced Tete out of the field. Donaire stopped alternate foe Stephon Young in six rounds.

Would Donaire have defeated an uninjured Burnett or Tete? We’ll never know and it doesn’t matter. Donaire is here, now, in the WBSS final and faces a fighter who handled his side of the bracket with almost frightening ease.

Naoya Inoue has won eight in a row inside the distance. His last seven knockouts have all come against men who had never been stopped before, four of them current or former beltholders. In his semi-final win over another young, prime titlist in Emanuel Rodriguez, Inoue added a full title in his third weight class in less than two rounds.

Already high on many lists of the best fighters in the world sans weight classes, Inoue has a chance five days after Saul Alvarez-Sergey Kovalev to make an equivalent statement for the top spot against a faded but still game and dangerous veteran.

Thursday’s might not be the expected final but Inoue-Donaire is probably the easiest of all possible promotions (DAZN, 5 AM EST). Two of the most devastating lighter weight punchers in recent memory square off in a classic clash of yesterday and today. Inoue has been a hardcore favorite since winning his first title at 108 lbs., an uncommon combination of speed, power, and lethal technique.

The only thing we don’t know is just how good Inoue’s chin is. Donaire has lost a step but he’s been stopped only once, at featherweight, has never lost at bantamweight, and stands at 5-0 with 4 KOs at 118 lbs. Can Donaire get one more big left hook home?

If Donaire does land a bomb, can Inoue take it? Does Donaire have enough game left to keep the younger man honest? Or is the veteran fated to simply play the co-star as Inoue fully stamps his place on the global stage?

It’s worth every second of lost sleep to wake up and find out in just hours. 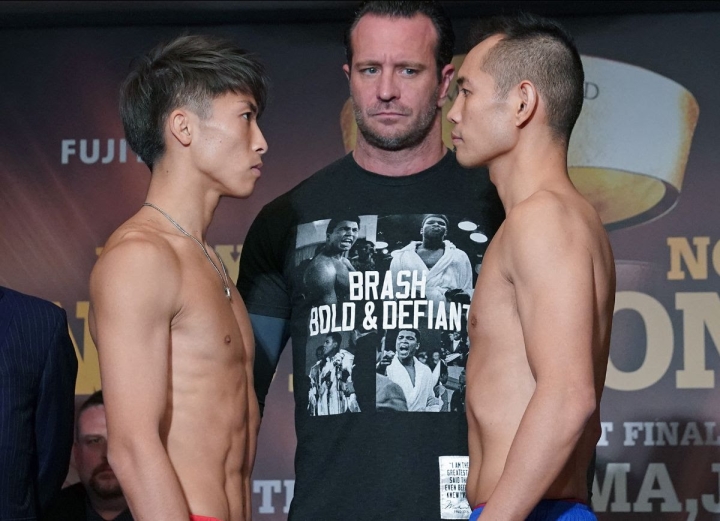 The Case for Inoue: The biggest advantage in the fight for Inoue might not be his youth or power but the edge in speed. Donaire is still quick but he may feel like he’s seeing a glimpse back at himself in the way the explosive Japanese banger gets off and Inoue does it with both hands. Inoue is an offensive minded fighter who can be patient when he needs to be but he’s always looking to land and stays in range to do it. His ability to be first in exchanges explains some of his success. Inoue uses a smart jab, is accurate and, along with a big left hook and right hand upstairs, launches one of the nastiest hooks to the body in all of boxing. While his head can seem stationary at times, Inoue does slip shots and blocks well with the gloves. He’s a skilled destroyer. Fighters who have gone rounds have been able to force Inoue to track them down but he’s proven adept at finding them. He’s only been twelve rounds once and might not have lost that many rounds in his whole career to date. Outside physical tools and boxing skills, the 2014 BoxingScene Fighter of the Year has also proven regularly to rise to the biggest occasions. All his title wins have been by stoppage and each has been more impressive than the last. He walloped Adrian Hernandez in just his sixth pro fight, dumped Omar Narvaez in two rounds (a fighter who took Donaire and Tete the distance and has still only been stopped once), and enters off the breathtaking win over Rodriguez. This is his first unification fight. What would rising to the occasion look like here?

The Case for Donaire: Donaire has never lost below 122 lbs. outside a short-rounds decision loss in just his second fight. Donaire is only the second man in history to even win a major title at flyweight and featherweight after Manny Pacquiao. Arguably his finest win, a second round knockout of unified bantamweight titlist Fernando Montiel in 2011, is one of the most memorable knockouts of the decade. Against Young in his last outing, he showed there is still mustard on his dangerous left hook. Young had never been stopped. Donaire iced him with one shot. Donaire still has a good jab and it’s not like he’s had bad losses in recent years. Nicholas Walters was red hot and considerably larger in the ring, Carl Frampton was a former unified titlist at 122 and titleholder at 126 lbs., and Guillermo Rigondeaux has still never lost to anyone at Jr. featherweight. If he has a failing, it is that at times Donaire has seemed to lack for a Plan B in the ring. He doesn’t adapt well on the fly or do much improvising but against Inoue it might not matter. The younger man will force him to react. Donaire has the edge in height and reach and was fully in the fight with Burnett even before the injury. He’s faded from his peak but he’s not shot yet. If he doesn’t get overwhelmed early, Donaire will have the chance to try to gauge the timing of Inoue. If he can let Inoue do some of the work for him, and bring himself into range, Donaire can still hurt anyone.

The Pick: What if Donaire gets his chance, lands the hook, and Inoue shakes it off? That’s the moment a lot of fight fans want to see. What happens when someone who really hits him back catches Inoue? Does he have the sort of chin that doesn’t wilt? If not, how does he recuperate and respond? Inoue appears to be a special offensive talent, the sort of fighter who produces “did I just see that” sort of moments very few can pull off but that’s a missing piece of the puzzle. Donaire might not get the chance and, if Inoue can go through him the way he has his last few foes, it would be telling. Donaire has been beaten. He’s never been run over. The thinking here is Donaire will make a respectable showing, and give the crowd some thrills, but Inoue would likely have been a danger to any version of Donaire. In 2019, Donaire might be catching arguably the most talented fighter in all of boxing at the height of his powers. The pick is Inoue by stoppage.

Don’t just wake up for the main event. The chief support bout adds more intrigue at bantamweight. WBC titlist Nordine Oubaali (16-0, 12 KO) faces Inoue’s younger brother Takuma (13-0, 3 KO) in his second title defense. Assuming the winner of Inoue-Donaire sticks around bantamweight, an Oubaali win could set up more unification (Tete would likely also figure in the future and has unfinished business with the WBSS field). If Naoya Inoue wins, Oubaali might be first. It sets up logically If Takuma wins, the younger Inoue would be staring at a mandatory with former titlist Luis Nery, still banned from boxing in Japan. Bantamweight is a lot of fun right now. The pick for tomorrow is Oubaali by decision.