Former world champion Murat Gassiev could make his debut in the heavyweight division in June, according to the boxer's Russian coach Vitaly Slanov.

Gassiev will soon fly to the United States to train with head coach Abel Sanchez in Big Bear, California.

“Now Murat is training at home. But after some time he flies to the United States, to the base in Big Bear. He holds a weight of about 100 kg (220-pounds) and tries not to let any weight go. I think he will be ready to debut as a heavyweight in June,” said Slanov to tass.

In the summer of 2018, Gassiev suffered his first career defeat with a twelve round decision loss to Oleksandr Usyk. The loss, in the World Boxing Super Series tournament final, would cost Gassiev his cruiserweight belts under the World Boxing Association (WBA) and the International Boxing Federation (IBF).

Usyk himself has officially jumped to heavyweight, and makes his debut in that division next month. 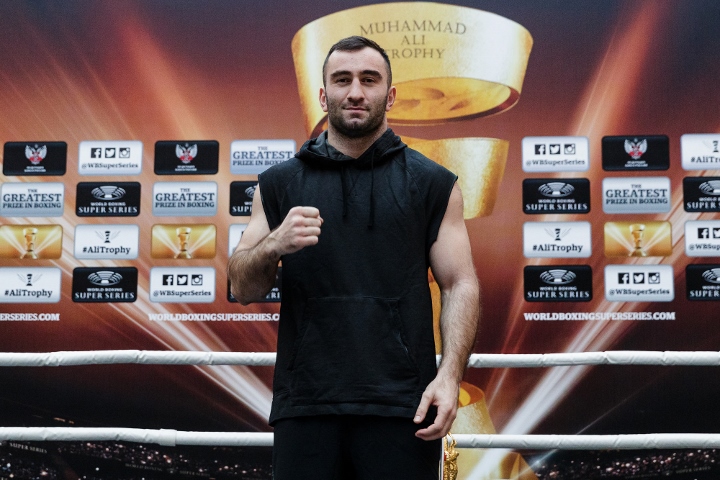 IN OTHER NEWS: Russian boxer Maxim Vlasov told RIA Novosti that he will hold his next fight on May 19 in Krasnodar against Dominican Lenin Castillo, while the fight will take place at the light heavyweight limit.

On the record of the 32-year-old Vlasov, 42 wins with three defeats, the boxer since 2015 was competing as a cruiserweight. In his last bout, last November, the boxer lost a twelve round decision to Polish puncher Krzysztof Glovacki in the quarterfinals of the second season of the World Boxing Super Series.

Vlasov in February announced the desire to go down to light heavyweight. On the record of the 30-year-old Castillo is a tally of 20 wins, two losses and a draw.

I used to think Gassiev would be too small for heavy. I think I may have changed my mind- [url]https://photo.boxingscene.com/uploads/klitschko-gassiev.jpg[/url]

[QUOTE=Koba-Grozny;19647750]Cruiser. And Gassiev's a young dude still - at 25 he's still filling out and the guy's a damn tank already. Reckon he's gonna be struggling to boil down to 200 before long if he ain't yet. Problem he got,…

Lots of good matchups that can be made for Gassiev at HW. He'll do well vs the slower less mobile guys in the division.

Hez an amazing guy to watch especially his left upper cut and straight right. Beautiful combinations. Let's see how he does in HW.

[QUOTE=Ray*;19647783]Am shocked he is moving up, i understand the money is better at HW but with Usyk going to HW and all the belts now vacant i would have expect Gassiev to try and win them all. He is very…