Munguia Vows: I Will Fix My Mistakes, Show Improved Defense

Rising Mexican star Jaime Munguia, only 21 years old, is still very young and admits that he needs to improve several details about himself.

He will stake his title on September 15th, when he faces Canadian Brandon Cook at the T-Mobile Arena in Las Vegas. The bout will be the HBO Pay-Per-View co-feature to the highly anticipated rematch between IBO, WBA, WBC middleweight champion Gennady Golovkin and Mexican superstar Canelo Alvarez. 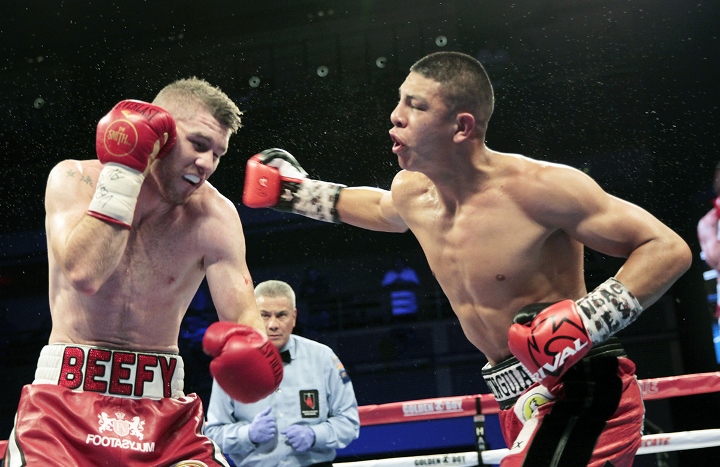 After winning the junior middleweight title of the World Boxing Organization (WBO) by crushing Saddam Ali in four rounds back in May, he returned last month in a very tough defense which saw him win a twelve round unanimous decision over former world champion Liam Smith in Las Vegas.

"They have not been easy rivals, it was clear that I beat both of them, I just want to improve my defense, my distance and everything I need," Munguia told Manuel Sebreros.

"My career progressed very fast but first of all I have to improve everything that failed me in the previous fight, I think I have what it takes to do that and I know what I need and I hope for another defense this year to improve.

"It is an honor that fighters of that level [of Canelo and Golovkin] turn to see me, it means that I have what and the attributes and the desire to get ahead, and most of all I have the desire and I know I can improve a lot of things and there is nothing left to do it. More than anything I need more experience, more time, I am 21 years old and my body will be strong and ready at 23, 24 years old, it is not an excuse but I believe that within one or two years I can learn more."

Munguia (30-0, 25 KOs) admits that he was too focused on scoring a knockout win in his last fight.

"My weakest point was my concentration, I just concentrated on throwing punches, wanting to knock him out. It would had been smarter and it would have complicated me less in the fight [if I didn't do that]. It's not an excuse, I have a lot to learn from that fight and execute it in my next defense," Munguia said.

"I want to tell you not to lose sight of me, I'm going to improve on all of my mistakes and in the next fight they'll see another Jaime Munguía and I will give them great shows."

Dude is a walking tether ball.

He comes off well, its good to see him progressing

It’s funny how things work out. Earlier this year he was on the verge of being fed to ggg before the sanctioning bodies got involved now he’s on the cusp of being a major player

This kid is on his way to becoming a bigger fan favorite than Arturo Gatti. I got nothing but respect for the young man.