Munguia-Vargas Talks Stall, Unlikely For September - Or At All

The latest attempt for boxing to properly honor Mexican Independence Day looks to be another swing and a miss.

Talks for a targeted September showdown between unbeaten 154-pound titlist Jaime Munguia and former two-division beltholder Jessie Vargas have failed to progress beyond the initial revelation of ongoing discussion, BoxingScene.com has learned.

The hope was for such a fight to headline a September 14 show in Las Vegas, with Golden Boy (Munguia) and Matchroom Boxing USA (Vargas) to co-promote the event. Even if the bout can be salvaged, the chances of it landing on that date are highly unlikely. As reported earlier by BoxingScene.com’s Keith Idec, unbeaten former lineal heavyweight champion Tyson Fury has now claimed the date, as he will face Sweden’s Otto Wallin in Vegas. 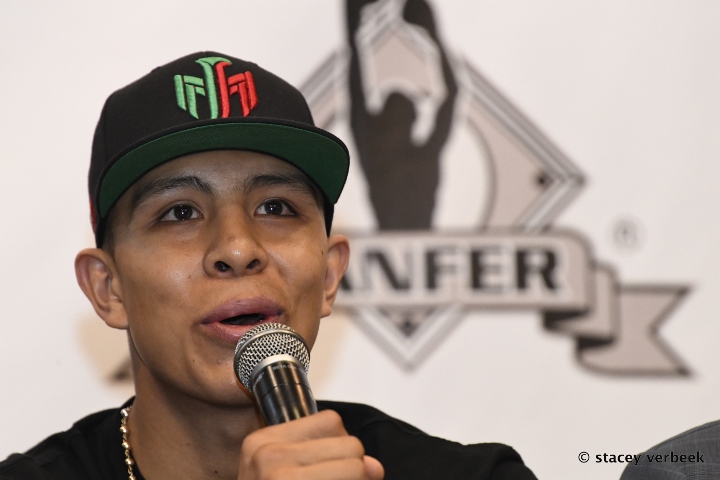 A representative from Golden Boy Promotions declined comment to BoxingScene.com, although not denying the aforementioned development.

News of the suggested title fight was initially leaked by Vargas himself, perhaps in an effort to advance ongoing discussion between the two camps.

“Currently negotiating a fight with Jaime Munguia for September,” Vargas (29-2-2, 11KOs) publicly stated through social media on Tuesday. “Bringing entertainment to my fans.”

Unfortunately, the Vegas native and former 140- and 147-pound titlist might have to find another opponent in order to keep that promise.

The lack of movement in negotiations is additionally disappointing given that both boxers are aligned with sports streaming service DAZN, with their respective promoters having regularly done past business together.

Hearn recently teased his intentions to have unbeaten lightweight Devin Haney command the September 14 date in Las Vegas (where Vargas was born and raised) once it became clear that it would no longer be occupied by World middleweight champion Saul ‘Canelo’ Alvarez, who is now eyeing an October 26 return but still in need of an opponent.

A Munguia-Vargas pairing wouldn’t have quite carried the same clout as Alvarez headlining a Mexican Independence Day-themed event in Las Vegas, but still would’ve sufficed. Tijuana’s Munguia is actually one of the bigger draws on DAZN, his rising star potential carried over from previous appearance on premium cable giant HBO, who exited the boxing business last December.

Munguia claimed a super welterweight title last May, tearing through Sadam Ali inside of four rounds to become a major titlist at just 21 years of age. He’s already racked up four defenses, with his entire five-fight title reign taking place within an 11-month span.

Included among the lot was his own taste of a Mexican Independence Day-themed show in Vegas which came last September. Munguia scored a 3rd round knockout of Brandon Cook in the chief support to Alvarez’s majority decision win over then-unbeaten and unified titlist Gennadiy Golovkin in their title fight rematch at T-Mobile Arena.

Some of the new penny shine has come off of the 6’0” super welterweight since then. Munguia—who turns just 23 in October—found himself in a firefight in a competitive but clear decision win over Japan’s Takeshi Inoue this past January. Three months later came his first title fight in Mexico, though he was considered extremely fortunate to escape with a 12-round majority decision over mandatory challenger Dennis Hogan this past April.

There were talks of the still-growing Munguia possibly moving up to middleweight, as he’s struggled at the scales in each of his last two fights. His name was floated as a candidate to face Golovkin this fall, although it now seems unlikely as Golovkin has entered advanced talks for a clash with Sergey Derevyanchenko for the IBF title of which Alvarez was recently stripped, as reported by BoxingScene.com on Thursday.

There stands a chance he could still make the move up the scale, possibly even against Alvarez in the event that Golden Boy would want to make things easy and keep it in-house, although it would risk getting a rising star and reliable draw beaten well ahead of his full marketing ceiling.

Vargas made his foray into the super welterweight division earlier this year, engaging in an entertaining brawl with Mexico’s Humberto Soto before putting him away in six rounds this past April. The win was his first since Dec. 2017, having fought to back-to-back draws with Adrien Broner and Thomas Dulorme in his lone two fights of 2018.

The 30-year old Las Vegas native remains hopeful of adding a third major title to his resume, enjoying a two-year reign at super lightweight before moving up to 147 pounds in 2015. His first bid at a major belt came up just short, dropping a competitive 12-round decision to Tim Bradley in their June 2015 interim title fight before winning the real thing in March 2016, scoring his own stoppage win over Ali to claim a vacant belt.

The latter of his two reigns was short lived, dropping a lopsided 12-round decision to Manny Pacquiao in his first title defense in Nov. 2016.

Whether or not Vargas chooses to remain at super welterweight or drop back down to welterweight would entirely depend on the opportunity presented.

Not sure of who or what to believe at this point.

[QUOTE=omh;19956612]He may end up with the canelo fight if Andrade gets greedy[/QUOTE] [QUOTE=The3;19956658]Munguia vs Canelo all you need now is for Boo Boo to ask for too much money[/QUOTE] [QUOTE=Javcar;19956958]These fools are pricing themselves out to end goldenboy and match…

Looks like the beginning of the End for DAZN. Welcome to the U.S. market Matchroom usa