Munguia on Facing Canelo: It's a Fight That Has To Happen!

This past Saturday night in Texas, Jaime Munguia (35-0, 28 KOs) made his long-awaited debut at the middleweight limit of 160-pounds.

Munguia broke down and eventually stopped division veteran Spike O'Sullivan in the eleventh round before a pro-Mexican crowd.

After the fight, Munguia called out the biggest names in the weight class - including Canelo Alvarez, Gennady Golovkin and Jermell Charlo. 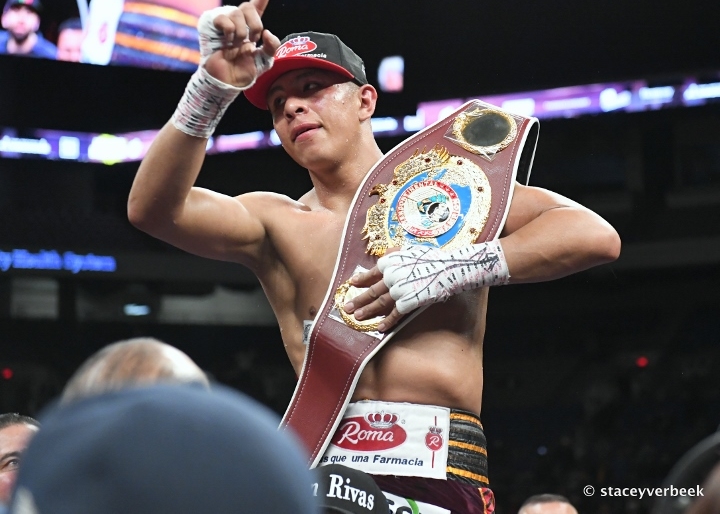 Canelo is at the very top of Munguia's list of most requested opponents.

Munguia is co-promoted by Golden Boy Promotions, who are also the head promoter for Canelo.

Canelo is not in favor of facing other Mexican boxers, but he's willing to face Munguia if the right opportunity presents itself.

When he last appeared in the ring, Canelo was competing at the light heavyweight limit of 175 and scored an eleventh round knockout of Sergey Kovalev. He later vacated the belt and is expected to move down in weight to the super middleweight limit of 168.

Canelo owns the WBA's regular title at super middleweight, but he also has the WBA's title at 160. It's not exactly clear if Canelo is still capable of making the middleweight limit after jumping up by 15-pounds.

"People are asking for that fight [with Canelo], it is something that I can clearly see happening in the future if I keep winning and if we are both in the same division. It is a fight that sooner or later has to happen. Let's move forward calmly, obviously if the opportunity presents itself then we are ready, but we take things as they come our way," Munguia said.

Munguia isn't a challenge for Canelo

Munguia has no power in 160 and to beat canelo you have to knock him out,,Munguia finish O’Sullivan in 11 and lemieux KO O’Sullivan in 1 round.. Munguia will be sent to the hospital if he fights canelo now or…

let him face Lemieux or Andrade, he does not deserve a canelo payday

so maybe saunders next, ggg on september an munguia as a tune up on december... that is the most likely scenario..