Golden Boy Promotions announced two highly competitive matchups featuring some of its best in-house talent on the stacked undercard of Munguia vs. Johnson. In the co-main event, Rashidi “Speedy” Ellis (22-0, 14 KOs) will face Alexis “Lex” Rocha (16-0, 10 KOs) in a 10-round bout for the vacant WBC International Silver Welterweight Title. The night will also feature an explosive matchup between standout contenders Marlen Esparza and Sulem Urbina in a world title eliminator. 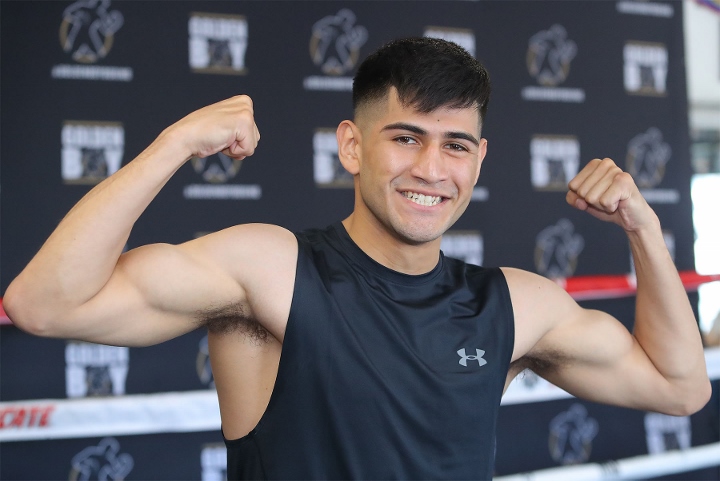 The action takes place on Friday, October 30 at Fantasy Springs Resort Casino and will be streamed live exclusively on DAZN. The event will be closed to the public and media.

“Boxing fans want to see competitive matchups, and that’s exactly what we are delivering,” said Oscar De La Hoya, Chairman and CEO of Golden Boy. “Rashidi Ellis and Alexis Rocha have spent the past few years climbing up the rankings on many of our shows. But now, they will risk their undefeated records against each other for a chance to get one step closer to a world title. That same night, we’ll also be presenting another historic matchup for women’s boxing as Olympic Bronze medalist Marlen Esparza takes on standout contender Sulem Urbina. We can’t wait to host this stacked night of action.”

At 27 years of age, Ellis is ready for the very best that the welterweight division has to offer. The native of Lynn, Mass. has never tasted defeat since making his professional debut in 2017, and he’s fought in Mexico, Puerto Rico and the Dominican Republic as well is in many different cities in the United States. Ellis has held the IBF North American Welterweight Title and the WBA Continental Americas Welterweight Title, the latter of which he earned via unanimous decision in his rematch against Eddie “E-Boy” Gomez. Now, Ellis will look to earn the most impressive victory of his career so finally earn his shot at a world title.

“I’m finally back in the ring on October 30,” said Rashidi Ellis. “And I’m happy that it will be at my favorite place, Fantasy Springs Resort Casino. This is going to be a very exciting night for boxing fans. How often do you get to see two young, undefeated contenders face each in their prime? Alexis Rocha is a tough fighter, but I need to show the world that I’m ready for a title shot. Make sure you stay tuned!”

Rocha is a 23-year-old southpaw of Santa Ana, California who is widely considered as one of the best rising contenders of the welterweight division. Since making his debut in 2016, Rocha has steadily climbed the rankings by fighting some of the biggest cards that Southern California has hosted in recent years. After defending his regional title against the likes of Berlin Abreu and Roberto Valenzuela Jr., Rocha will look to pass the toughest test of his career when he takes on a fellow unbeaten contender in Ellis.

“What people don’t know is I wanted this fight a year ago, but Rashidi and his team turned it down,” said Alexis Rocha. “There’s been a lot of talk about the future of boxing and upcoming stars, and I’ve felt slighted because I haven’t been in that conversation. Rashidi said something about how he’s just fighting another name. I can promise you I’m not just another name. And when this is over, Rashidi and the entire world of boxing are going to know more than my name: they are going to know that I’m ready to carry the sport forward into a new generation of champions.”

As mentioned above, Golden Boy will feature yet another historic matchup between two of its female competitors as Marlen Esparza (7-1, 1 KO) of Houston, Texas and Sulem Urbina (12-0, 2 KOs) of Phoenix, Arizona will clash in an eight-round WBC Flyweight World Title Eliminator bout.

“I’m excited,” said Marlen Esparza. “I want to offer my thanks and appreciation to the WBC for the opportunity to fight for the shot at the world title. It’s been a dream and vision of mine to fight representing the WBC. I want people to see another great fight. I'm proud to be on the stage again with a great fighter, and I know there are a limited amount of major women's fights, so I'm honored to have this opportunity. I've fought Sulem Urbina multiple times and look forward to doing it again. Game on.”

“As soon as I got the call about this fight, I instantly took it because I know it’s a big opportunity for me,” said Sulem Urbina. “We are both with Golden Boy, and they want to give the best fights possible. Marlen and I have some history. When I first saw her fight in 2008, I became a fan of hers, until the time arrived in which I became a rival of hers. I feel that Marlen has a lot to owe to Seniesa [Estrada] because that loss opened her eyes and showed her that she’s not done yet. I know she’ll come back stronger. I’ll be ready for the best version of Esparza. In the midst of a pandemic and during a time of such uncertainty, I know that this fight, despite not having people attend, will have a huge audience through DAZN because it is a fight that everyone wants to see.”

Hard-hitting Elwin “La Pulga” Soto (17-1, 12 KOs), the pride of Mexicali, Mexico, will defend his WBO Light Flyweight World Title against Carlos Buitrago (32-4-1, 18 KOs) of Managua, Nicaragua in a 12-round fight presented in association with Zanfer Promotions and Miguel Cotto Promotions.

Uzbekistani wrecking ball Bektemir “Bull” Melikuziev (5-0, 4 KOs) will continue his rapid rise up the 168-pound rankings when faces Alan Campa (17-5, 11 KOs) of Sonora, Mexico in a 10-round clash for the NABO Super Middleweight Title.

Lamont Roach Jr. (19-1-1, 7 KOs) of Washington, D.C. will fight in a 10-round super featherweight fight. This will be Roach Jr’s first fight after challenging for the WBO Junior Lightweight World Title in November 2019

descent opponent for Melikuziev, Campa is big and durable, SMW division will be lit in 2021

[QUOTE=Mammoth;20785420]Derevyanchenko would beat the dog**** out of Munguia. He was way ahead of Stevens till he got caught.[/QUOTE]Munguia is still green, but I don't think Oscar would put him in there if he didn't think he could win!

[QUOTE=Bronx2245;20785391]Why? He was stopped by Derevyanchenko and Curtis Stevens! You must not respect Munguia at all?[/QUOTE] Derevyanchenko would beat the dog**** out of Munguia. He was way ahead of Stevens till he got caught.