Jaime Munguia is set for the next step in his middleweight journey.

The unbeaten former 154-pound titlist continues his quest for a second divisional crown, as he faces Bahama’s Tureano Johnson. Both boxers made weight for their 12-round bout, which headlines Friday evening live on DAZN from Fantasy Springs Casino in Indio, California. 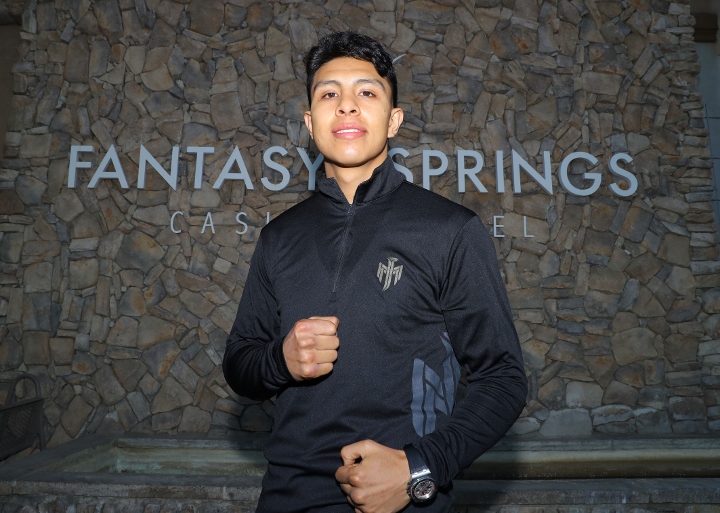 Munguia moved up in weight earlier this year, scoring an 11th round stoppage of veteran trialhorse Gary ‘Spike’ O’Sullivan this past January in San Antonio, Texas. The bout came following a 19-month stay as a junior middleweight titlist, having made five successful defenses over that stretch.

Johnson resurrected his career with a 9th round knockout of previously unbeaten Jason Quigley last July. The 2008 Bahamas Olympian hadn’t won a fight in more than two years prior to that point, having suffered a 12th round knockout at the hands of Sergiy Derevyanchenko in their August 2018 middleweight title eliminator and being held to a split decision draw with journeyman Fernando Castañeda last February.

Rashidi ‘Speedy’ Ellis and Alexis Rocha both arrived chiseled and on weight for their anticipated 12-round clash of unbeaten welterweights. Lynn, Massachusetts’ Ellis (22-0, 14KOs) came in at 146.8 pounds, while Irvine, California’s Rocha (16-0, 10KOs) was 146.6 pounds.

Houston’s Marlen Esparza—a 2012 Olympic bronze medalist for the U.S. team which competed in London—weighed 111.8 pounds for an eight-round flyweight clash, having to disrobe after initially coming at 112.2 pounds. The Houston native faces Sulem Urbina, a Mexico-born contender now based in Phoenix who checked in at 111.6 pounds.