Munguia: It's an Obligation of Mine To Deliver For Fight Fans

It has been a whirlwind of a 2018 for Jaime Munguia.

Munguia believes he has not yet reached his full potential as a fighter but is eager to perform to his best on the biggest fight card of this year.

Munguia will make the second defense of his WBO junior middleweight title against Brandon Cook of Canada on Saturday at the T-Mobile Arena in Las Vegas. The 12-round bout will precede the rematch between middleweights Canelo Alvarez and Gennady Golovkin (8 p.m. ET/ 5 p.m. PT). 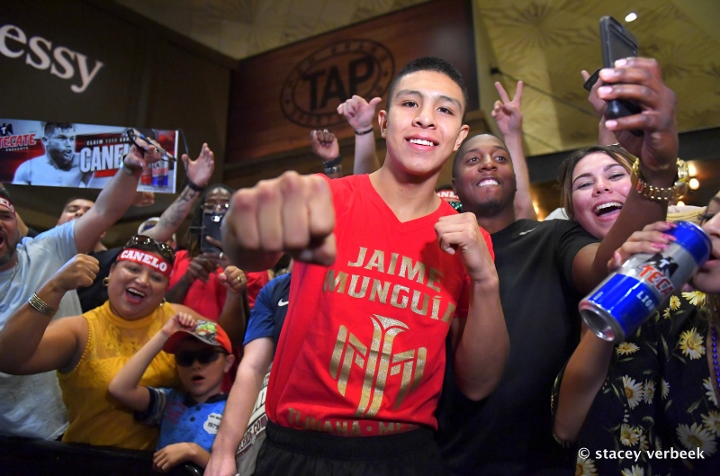 It will not be Munguia's first time fighting in Las Vegas. Munguia dropped Paul Valenzuela there times en route to a second round knockout victory of Paul Valenzuela on Dec. 9. He also fought in Las Vegas in his last fight on July 20, a 12 round unanimous decision over former world title challenger Liam Smith.

The knockout victory might have garnered a quick result in a boxing publication, but Munguia's impressive fourth round annihilation of Sadam Ali in Verona, New York on May 12 caused a significant ripple effect that boxing fans still talk about today.

This came after Munguia was discussed as a possible opponent for Golovkin on May 5 after Alvarez was suspended by the Nevada Athletic Commission after failing two drug tests for low levels of clenbuterol. The Nevada Commission did not approve Munguia as an opponent and Golovkin ended up fighting and knocking out Vanes Martirosyan after the fight was moved from Las Vegas to the Los Angeles suburb of Carson.

"After the Sadam Ali fight, I did send my thanks to the Nevada Commission," said Munguia after a recent media workout in Los Angeles. "I continue to give them thanks because if it wasn't for them, I wouldn't be a world champion."

Munguia (30-0, 25 knockouts), who resides in boxing hotbed of Tijuana, Mexico, will take a significant leap in terms of platform he has been accustomed to in recent fights.

Eight weeks prior to the Ali fight on Mar. 17, Munguia fought before a sparse crowd at the Arena Joe Sulaiman in Monterrey, Mexico, stopping veteran Johnny Navarrete in three rounds.

After fighting twice on HBO's 'Boxing After Dark,' he will fight before a sell-out crowd of about 18,000 and on HBO Pay-Per-View, where even casual boxing fans may be treated to a knockout or a stellar performance. The card also coincides with the famous Mexican Independence Day weekend.

"It's a great opportunity to be on this fight card," said Munguia, who is currently co-promoted by Zanfer Promotions and Golden Boy Promotions. "It's an important date for all Mexicans. It is an obligation of mine to deliver for fight fans. I'm very excited to be on a card that features some of the best fighters in boxing. It's my obligation to perform better than in my last fight. I have to be at my best for the fight fans that night."

Munguia has to be at his best against Cook (20-1, 13 KOs), who resides in the Toronto suburb of Ajax. He is currently ranked number three by the WBO and has won his last two bouts since his ninth round knockout loss to unbeaten Kanat Islam on Sept. 9 of last year.

Cook is an aggressive puncher that likes to come forward, something Munguia is aware of.

"He is a fighter with a lot of experience," said Munguia, who is trained by Roberto Alcazar. "He is older than me. I have a longer reach and I believe I'm stronger than he is. We just have to be careful from distance. He likes to throw all power punches, but I believe we will have our arm raised in victory.”

Munguia not only fulfilled his goal of becoming a world titleholder, but 2018 has been a breakthrough year for the 21-year-old. Diehard fans in the United States may have seen Munguia fight on beIN Sports en Espanol telecasts or on YouTube, but none would have expected the type of ride Munguia has had in a span of six months.

Even Munguia was somewhat perplexed after recalling what he has accomplished.

“I didn't expect to have all this happen in such a short amount of time, but things happen for a reason. We are very prepared and focused on the task at hand because many things could happen. We've come to this fight with the right mentality and I believe everything will come out good.”

Munguia still has a way to go to become a complete fighter. Will 2019 be a year where Munguia unifies a world title belt against the likes of Jarrrett Hurd or Jermell Charlo? Or will Golden Boy and Zanfer work with Munguia to have him defend his world title belt on HBO and Facebook Watch to continue to get his name out there?

The days of fighting numerous times in one calendar year have ended (Munguia fought seven times each in 2016 and in 2017), but fighting the likes of Liam Smith have pushed Munguia to continue learning an\d honing his craft in the ring.

“I learned a lot in that (Smith) fight. To be honest, and with all due respect to Liam Smith, I expected less of him in that fight. Smith had a lot of experience and he came in well-prepared that night. He exposed some of the weaknesses that I am correcting in the gym.”

“I'm very grateful because I've been very active. I haven't lost focus or motivation in the gym. It's a great opportunity that no fighter should take for granted. The more I fight, the more experience I'm getting. I'm young. I'm only 21 years old. I do realize I need to improve on things. I need to get better defensively and how I initiate exchanges because that is when I get hit. I do need to practice on those things in the gym. That's what I believe I need to improve on.”

still ridiculous that NSAC didn't let him fight GGG. look at the undercard fights they approve everyday. Please tell me how GGG-Munguia is a bigger mismatch than Canelo-Khan or any heavyweight fight like Fury-Cunningham.

Gotta love this guy! He's humble a he's a very likable guy. I got him winning tonight by KO. WAR MUNGUIA!

HBO is pushing this KID hard right now. WAR Munguia (before I end up hating him, because of U)