Munguia: I Don't Know If This Is My Last Fight At 154 Pounds

Jaime Munguia was so pleased with his returning to old form, that he’s having second thoughts about life in a new weight division.

Granted, the unbeaten 154-pound titlist was always going to be too much to handle for Ghana’s Patrick Allotey from the moment their fight was announced more than a month ago.

Still, the 22-year old from Tijuana, Mexico drew rave reviews for his performance on Saturday, scoring a 4th round knockout in the main event of a DAZN-streamed bill in front of a raucous crowd at Dignity Health Sports Park in Carson, Calif.

"The journey getting here was hard, but I feel really good with these people who came to support me," noted Munguia (34-0, 27KOs), whose last stoppage win came on this very weekend one year ago. "This is Mexican Independence Day, and I feel really good and I'm ready to (accomplish) more and go further in my career.” 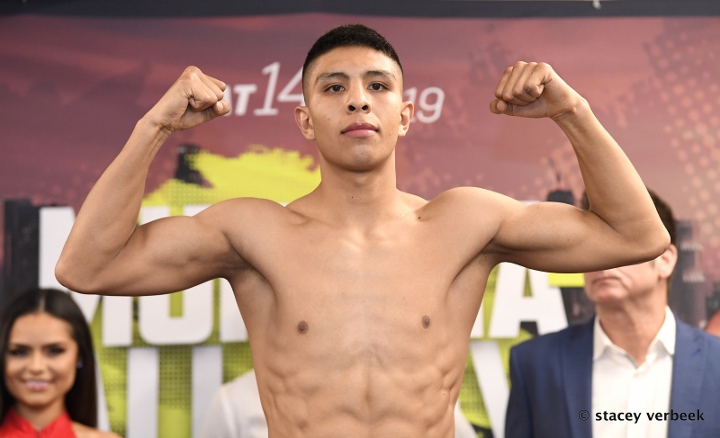 The bout was Munguia’s first under the watchful eye of Tijuana’s last great legendary boxer, Hall of Fame former four-division titlist Erik Morales who has taken over the training reins for the rising star. The intent was to bring out the aggressive side of the young boxer, who has been extended the distance in three of his last four starts, including a heavily disputed 12-round win over Dennis Hogan this past April in Monterrey, Mexico.

Their first bout together was thought to be the last at 154 pounds for the 6’0” man-child who seemed destined for a middleweight run. Perhaps not so fast on that front.

“I don't know if this is my last fight at 154 pounds,” admits Munguia, who has already made the fifth successful defense of the title he claimed just 16 months ago in a four-round wipeout of Sadam Ali. “I need to talk with my promoters Golden Boy and Zanfer.

“I need to talk to my team and then we'll decide."

Want to see him fight Jessie

Weight bully getting fattened up before being fed to Canelo in a mismatch... I predict severe health issues in the future for this kid with no defence.