Moruti Mthalane: Yaegashi Is Going To Bring It

Boxing fans were elated upon the announcement of the loaded tripleheader that was announced for Dec. 23 in Yokohama, Japan.

Still, you’d be hard pressed to find a happier soul than Moruti Mthalane.

Long serving as one of boxing’s most avoided, the reigning flyweight titlist will serve as the opening leg of the aforementioned tripleheader as he defends his title versus Japan’s Akira Yaegashi. It wasn’t the first choice in mind for the 37-year old from South Africa, but one which he openly embraced since few others in the division have bothered to look his way.

“It’s a great fight between two great fighters,” Colin Nathan, Mthalane’s trainer shared with BoxingScene.com his view of the bout, which joins a bill that includes a junior flyweight title unification bout between Ken Shiro and Felix Alvarado and a middleweight bout between local hero Ryota Murata and Canada’s Steven Butler. 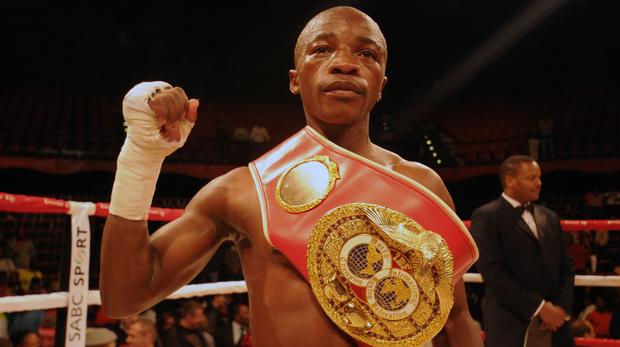 Mthalane (38-2, 25KOs) has literally traveled the world in efforts to extend his second run as a flyweight titlist. His first reign ended solely at the expense of the sport’s ugly politics as he was forced to vacate a belt he held more than three years. The strap found its way back around his waist following a 12-round decision over previously unbeaten Muhammad Waseem last July in Malaysia. From there came road wins over Masahiro Sakamoto in Macao and Masayuki Kuroda this past May in Japan.

In Yaegashi (28-6, 16KOs), Mthalane faces a former three division titlist—including a run as the World (lineal) flyweight champion earlier this decade—and a cult favorite among the sport’s hardcore fan base.

“Yaegashi is going to bring it,” notes Mthalane, who has won 15 straight since an injury stoppage loss to Nonito Donaire nearly 11 years ago.

The fight came about after a failed bid by Mthalane and his team to entice the division’s other titlists to enter a unification match. He was willing to offer a loophole for Charlie Edwards, who was pressed with the dilemma of having to grant Julio Cesar Martinez a rematch to their injury-shortened three-round No-Contest this past August in London, England. Edwards—who has long struggled to make flyweight—instead decided to abandon his title and the division altogether as he will now compete as a super flyweight.

Mexico’s Martinez will now fight for the vacant title, and perhaps with a win will be more eager than others to walk in the direction of rather than away from Mthalane.

Until then, all that the veteran boxer can do is welcome the challenges of those actually willing to face him.

“Both of these guys are true warriors,” notes Nathan. “It’s going to be awesome.”

This maybe the most even fight of the card. Its rare to see two flyweights close to 40 in a world title fight. I'm going to watch to see how they perform, these lighter weights don't see two vets getting…

Yaegashi was ko'ed by Milan Melindo in one in Japan.:smashfrea