Monroe: I Don't Want To Hear Excuses From Charlo When I Win

Charlo’s upcoming opponent wants to face the most focused, prepared Charlo possible December 22 at Barclays Center in Brooklyn. That way, Monroe explained, when he pulls off an upset, there won’t be any justifications for Charlo’s first loss.

“I want him to be the best of who he is,” Monroe told BoxingScene.com following a press conference Thursday at Barclays Center. “That way, when I walk away with the victory, there will be no excuses. There’ll be no, ‘He didn’t …’ Don’t give me the excuses. Y’all been giving me excuses my whole career. Give me my props.” 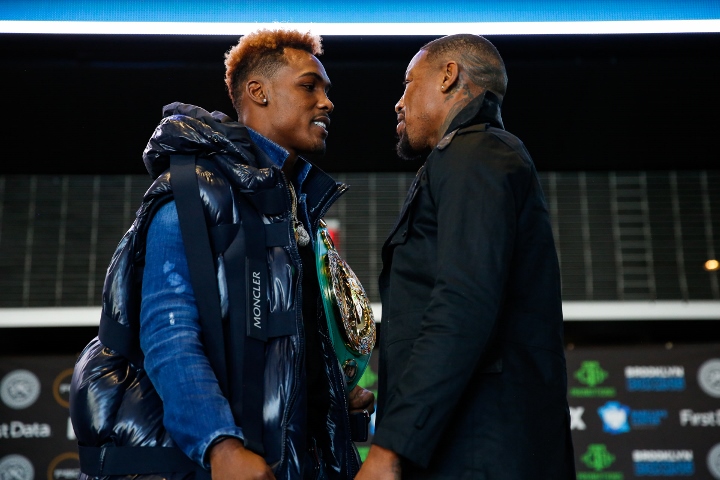 Monroe (23-3, 6 KOs) understandably is a big underdog entering their 12-round, 160-pound title fight. The southpaw from Rochester, New York, has been stopped by Gennady Golovkin (38-1-1, 34 KOs) and out-boxed by Billy Joe Saunders (26-0, 12 KOs) in his first two middleweight championship matches.

The 6-feet Charlo also owns a significant size advantage and is a much stronger puncher than the 5-feet-9 Monroe. Nevertheless, Monroe is confident Charlo hasn’t been in the ring with an opponent capable of what he can do.

“There’s just a different texture to the fight when you have to fight a slick southpaw,” Monroe said, “you know, a guy that’s been in there, who’s cagey, been through the ringer, understands what it’s like to be on the B side and how much more I have to pull. I know the extra I have to pull. He’s always been the A side, so there’s never really been that extra he has to pull. So what happens when he gets in that position where he has to pull that extra? Can he do it? We’ll see fight night.”

The 31-year-old Monroe has won two bouts against nondescript opposition since Saunders out-pointed him 13 months ago in London. He realizes he is fortunate to get a third championship chance against Charlo (27-0, 21 KOs), the WBC’s interim middleweight champ, and is motivated to take full advantage of it in a fight FOX will televise as the main event of a tripleheader.

“The third time is a charm,” Monroe said. “I’m the third Willie Monroe in line and they always say the third time’s a charm. My favorite basketball player, LeBron James, didn’t get the ‘chip till the third time. So I think third time’s the charm. And it’s my job to put in the work leading up to it. And I’m glad I have an opponent like Jermall Charlo, because he’s a force to be reckoned with. And once I conquer this mountain there should be a lot less questions about how good Willie Monroe really is.”

[QUOTE=Boxing1012;19228696]We will see...I actually like the Charlos' abilities...just when you are making that much noise and not fighting the other top guys in your weight division it can cause people to look at you a little funny. Looking forward to…

[QUOTE=Boxing1012;19226179]....When did I say he had power you illiterate troll? And you could say anyone 'rarely throws punches.' He can really box, if you can't see that you're blind..[B]and probably gay[/B][/QUOTE] Lol And also probably poor! And you're probably ugly…

[QUOTE=Bobby Shaw;19227708]Monroe has the mental strength of a tadpole don't expect anything. The Charlos are total frauds just making noise about being lions when they are nothing more than pregnant foxes but still Monroe can't beat them.[/QUOTE] We will see...I…

[QUOTE=bigdunny1;19225904]Willie is the middleweight version of Paulie Malignaggi. He keeps losing and getting more fights for 1 reason he has ZERO power and seen as a non threat. Only 6 career KO's. Just like Paulie was passed around like a…