Andrew Moloney remembers the exact punch that closed the eye of Joshua Franco. He can recall the feeling of his hand in his glove and the sight of Franco’s eye gradually puffing up. He’s replayed it over and over in his head a thousand times, watched it back on tape dozens more.

Unfortunately, those tasked by the Nevada State Athletic Commission with watching it back in real time to determine whether it was the punch Moloney so vividly recalls or a headbutt that caused the damage to Franco’s eye somehow determined it was the latter, even after 27 minutes of deliberation ringside.

Even after an additional three weeks to consider it.

For three days after the fight, Moloney couldn’t sleep. The visions of the fight and the constant messages of outraged support kept him awake for almost 72 hours. Once he got on a plane home to Australia on the third day, with no phone connection, he was finally able to rest.

Now, as he sits in quarantine at home in Australia in a double Queen bed hotel room, he sits and waits for justice that may never come.

“I'm still devastated that I've come home now and I don't have that world title belt that I really thought I was going to have. I envisioned this fight for five months. I just kept envisioning how good it was going to feel to come back home with that world title, and I believe I should have it right now,” Moloney told Boxing Scene. “Even at the end of the first round when he came to our corner, rather than saying the eye is damaged from a head clash, he just said 'watch your heads.' And it didn't even click to me that he was talking about the damage to the eye, because like I said, I knew it was from a punch.”

The bizarre circumstances which led to Moloney’s November 14 WBA super flyweight title bout with Franco being declared a no-contest rather than a stoppage win in his favor are still left unsettled. As Boxing Scene’s Jake Donovan reported last week, legal proceedings have begun on Moloney’s behalf, but a hearing has yet to be scheduled by Nevada’s commission. As it stands, the commission’s ruling that a headbutt caused the damage to Franco’s eye, despite all evidence to the contrary, is still the official decision.

“The longer we waited in the ring, the more confident I became that they were going to overturn the decision. Everyone that was watching the replays was communicating to be in the ring saying there's no head clash, it was a punch. And I'm thinking they're watching the same thing, so I think it should be pretty obvious and they'll overturn the decision and things were gonna go my way,” said Moloney. “I just couldn't believe it when they announced the decision is a no-contest, I just, I was in shock.” 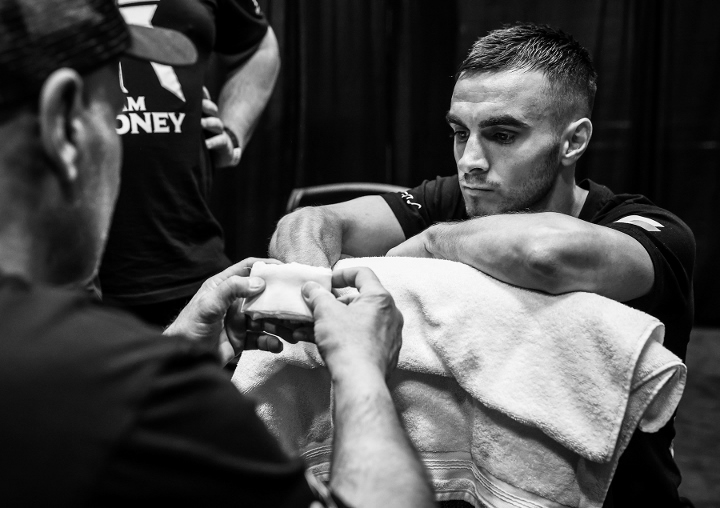 More frustrating for Moloney is the fact that after several weeks’ worth of time to review the footage and communicate with him and his team, the Nevada commission has not scheduled a hearing. As outlined in Donovan’s previous reporting, Moloney’s legal team is unhappy with the ruling being under review before they were given a hearing, which they claim is in contradiction of state law. A hearing is presently not expected until January or February.

“The real big shame from all of this is that it could have been such a good situation for boxing. The fans could have seen that oh, that's great, there's instant replay now and they can stop things from going wrong, they can turn the decision around and the rightful man will walk out as the winner,” said Moloney. “The Nevada commission had an opportunity to really shine that night, and instead, they've had millions of people from around the world coming out and saying this is corrupt and I'm not watching boxing anymore. And that's the last thing I want to hear, because I love the sport of boxing, I want it to grow and more people to tune in. That sort of thing was bad for the sport.”

With the situation seemingly completely out of his hands for months, at least, Moloney’s focus is now on scheduling another bout in which he can achieve the correct result. Moloney’s promoter Bob Arum has already floated the possibility of a third bout being staged in Australia, which would provide Top Rank with a greater financial upside. Australia has already begun staging large scale events with fans in attendance thanks to its handling of COVID-19. On November 28, the country recorded just 11 new cases. A bout between Tim Tszyu and Jeff Horn earlier this year drew 16,000 fans in an outdoor stadium.

While he would certainly have preferred the result to have been correct in the second bout, even if it weren’t overturned, winning a world title at home in a third bout in front of an adoring audience would be a welcome byproduct of a miserable situation.

“As you heard from Bob Arum, he said 'let's get out of Nevada.' Bob is very keen on doing this trilogy fight. We're talking about doing it early next year in Australia, and that would be a dream come true, to finally get my world title back in front of my friends and family would be amazing,” said Moloney. “Given everything I've gone through, it would make it just that much sweeter. If it was in Australia, that would be amazing.”